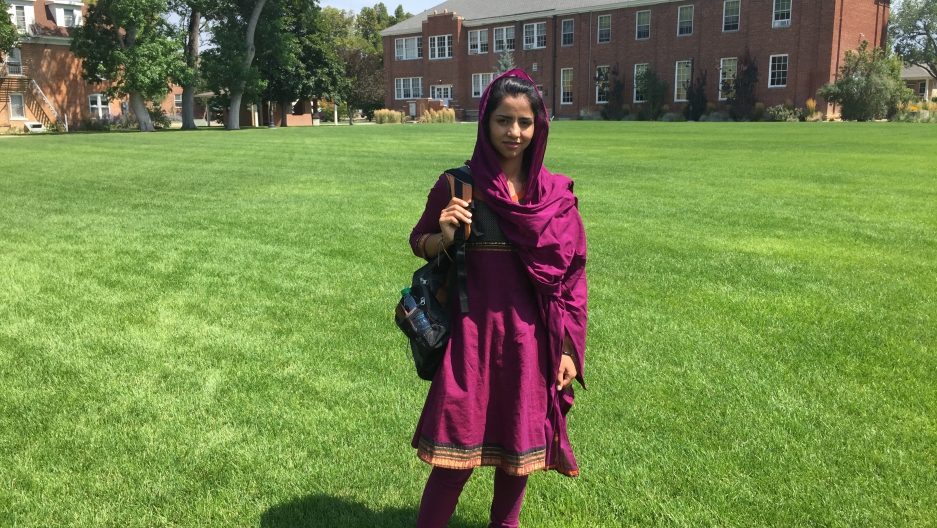 Born in Afghanistan, Sonita Alizadeh got a full scholarship to go to Wasatch Academy, a boarding school in the heart of Utah.

"My name is Sonita Alizadeh. I am from Afghanistan. I came to USA eight months ago. I am student at Wasatch Academy. And I’m a singer and rapper about women’s and children’s rights." And here’s where Sonita switches to her native Farsi. She goes back and forth between the two languages during her coversation with reporter Shuka Kalantari, who visted her at her new boarding school in Utah.

Sonita says one of the first things she did when she landed in Utah was eat pizza. She loves the pizza here. Her new boarding school has a massive dining hall, and the students have chefs who will cook them pretty much anything they want.

But here’s the thing: Every time Sonita is in that cafeteria and there’s food left on her plate that ends up thrown away, she gets really upset. She knows people in Afghanistan and other poor countries don’t have enough food to eat. She used to be one of those people.

Global Nation is partnering with the South Asian American Digital Archive's First Days Project to tell the stories of your first days in the United States. We want to know about those of you who immigrated here as students. What were your first days of school like?
Submit your story

In Afghanistan, and as a refugee in Iran, Sonita went to a school that took in child laborers and people like herself. But her teachers would find ways to feed her. They’d bring her lunch to school, or invite her to share their own meals. Her new life at the boarding school in Utah is the exact opposite.

Sonita says here, everyone eats sushi, all the time. A classmate told her it’s one of the more expensive foods in the US. Sonita grapples with that, being among students who, she thinks, don’t understand what the lives of poor children are like. Like that their leftover food would be an excellent meal for a child who has nothing to eat.

But she likes her friends, and she’s grateful for her new school, especially the freedom to sing in its recital hall. It’s a converted church, and the acoustics are amazing, she says. So she is eating up the perks at school, just not the sushi. She did try it once, says it tasted bland. Still, her classmates insist: Just try sushi one more time. Maybe you’ll like it.

But Sonita knows what she likes: cheeseburgers, chicken and pizza.