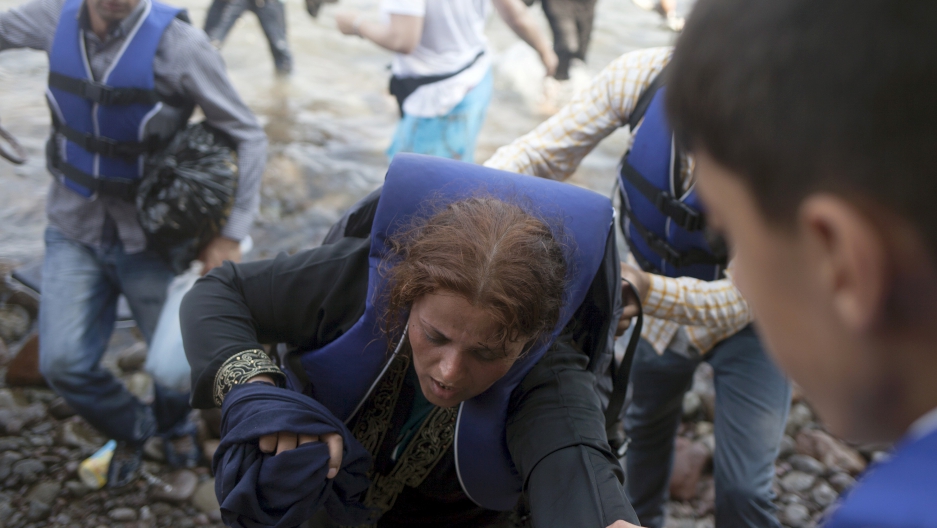 A Syrian refugee is helped moments after arriving on a dinghy on the Greek island of Lesbos September 3, 2015.

As the Syrian refugee crisis intensifies, many have started to question why wealthy Arab countries are not taking a substantial role in helping out.

In the past week the Arabic hashtag #Welcoming_Syria’s_refugees_is_a_Gulf_duty has been used on Twitter more than 30,000 times.

Jordan, Lebanon and Turkey have taken in hundreds of thousands of refugees but it seems like countries such as Saudi Arabia, United Arab Emirates and Qatar have been watching from the sidelines.

According to Joshua Landis, the Arab states are doing very little. In fact, he says they don’t have any policy refugees. They simply don’t allow them in.

“If you try and sneak in and you’re caught, you be immediately thrown out of the country,” he says.

Landis, who’s the director of the Center for Middle East Studies at the University of Oklahoma, explains that there are several reasons why Gulf states haven’t been very welcoming.

For one, he says, these countries are already overloaded with foreigners. For example, 88 percent of the population of the United Arab Emirates are foreigners. For Qatar, it's 85 and Kuwait 70 percent. These are mostly foreign labor who are on short contracts.

The rulers of these Arab countries are worried about these foreigners becoming a threat to the stability of their countries. "They’re very anxious that foreigners could take over,” says Landis, “so there is a very strict legal structure for sponsorship of foreign labor [and] they don’t let refugees to come into their country.”

In addition to that, Landis says that something else that makes leaders in these countries nervous is the youth bulge.

Since the Arab Spring, he says, Gulf countries have been actively trying to engage the youth. "The first response of the Saudi government in 2010-2011 [...] was to throw money at the problem," he says.

They spent more than $120 billion in scholarships and extended education abroad. "[They wanted to] make them happy and make sure they didn't go out on the streets," Landis says.

A list of countries that helped the Syrian refugees since 2013. Not one of them is an Arab/Muslim nation. #shame pic.twitter.com/sK6N0LljSj

Youth make up a large portion of the Syrian refugees and if these states were to take refugees in, they'd potentially be setting themselves up for another Arab Spring down the line.

Besides, there is a lot of unemployment in the region and more youth mean more people looking for jobs. To add to all this, Saudi Arabia is busy fighting a war in Yemen and is watching the fall of oil prices closely.

But at the same time, Landis believes that there is a brotherhood sentiment in these Arab countries towards Syrians. Only it’s shown in a different way.

“The way that this is reflected is Saudi Arabia sending arms and financial aid to the militants in Syria in order to destroy the Shia-led government of Bashar al-Assad,” he says.

In another words, if the government goes, many of these people wouldn't be stranded in the first place.

That, however, is proven to be much easier said than done.