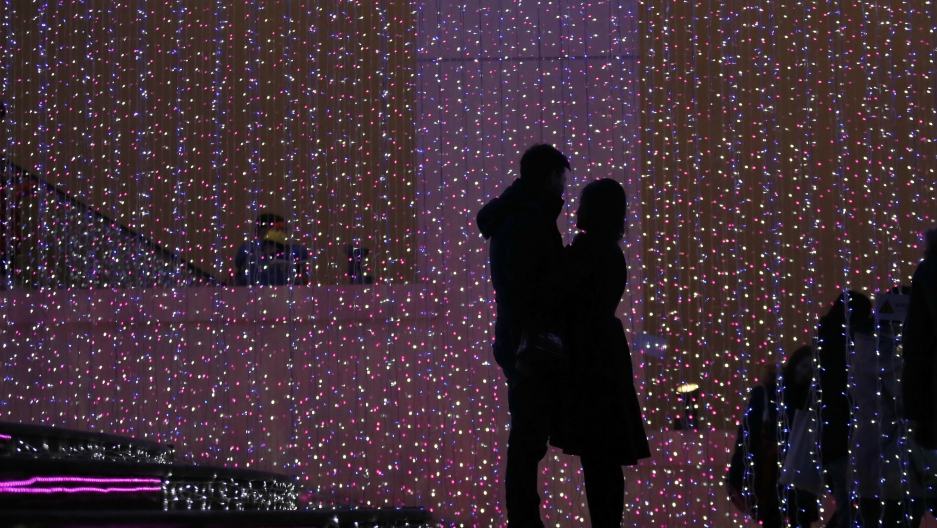 A couple hug each other in front of a light installation for Christmas celebrations in Beijing December 23, 2014.

In today's world of 24/7 connectivity, it comes as no surprise to hear that our tech habits may be hurting our relationships.

“I see technology and compatibility as one of the main subjects in therapy,” says Ian Kerner, a psychotherapist who specializes in couples counseling. “So often, couples are really having side-by-side conversations — they’re not having direct face-to-face conversations because they’re also on an iPhone or a gadget, so they’re partially vacated. In couples therapy, sometimes that’s the only time that they’re actually having a real, genuine face-to-face conversation.”

Since the TV became a fixture of the modern home, technology has drawn our attention away from our partners and to the dim light of glowing screens, a problem that has been exacerbated by our multiscreen society.

“The demands for our attention from technology are perhaps much greater than they have been in previous years,” says Kerner. “People feel the need to always be on and to always be working in this kind of global economy. And you have major [social platforms] like Facebook and Instagram — they’re all making such excessive demands on our attention that I think it’s probably more challenging for today’s couple to focus on each other and their family life than it was in previous generations.”

According to the Pew Research Center, 25 percent of cell phone owners in a marriage or partnership have felt their partner was distracted by their cell phone when they were together, and 8 percent had arguments over the amount of time a partner was spending online.

“I was just dealing recently with a couple where the wife was sort of sublimating a lot of energy into Instagram,” says Kerner. “She was always taking photos of the family, of their outings, of their vacations and meals — the whole family calls her ‘Paparazzi’ as a nickname because she’s always snapping photos of everything.”

Eventually, Kerner says, this woman’s husband reached a breaking point, something they discussed in a counseling session.

The husband yelled, cursed and caused a public scene. If you’re seeing visions of yourself in that fight, you’re not alone.

When Kerner was on Facebook (he’s since deleted his account), he says some challenges arose in his own relationship.

“I realized for a little while with my own wife that I didn’t really want her to be my friend on Facebook,” he says. “I didn’t want all of that extra information. If anything I wanted less information — I wanted more mystery and more unpredictability. I didn’t want to know that she was posting about being tired or having her third coffee for the day. So I specifically unfriended her during my brief tenure on Facebook. It’s something that I do recommend to couples.”

That’s right, ladies and gentleman. Contrary to popular opinion, unfriending your significant other online can actually help your relationship, he says.

“There’s something about being in a relationship where you want some unknowingness and some unpredictability,” Kerner says. “The other thing I would say to couples is don’t use therapy for your chance to have a face-to-face conversation. Put the devices down. Studies have shown that even if there’s a device nearby, it can change the texture of a conversation.”

Though the rest of us might not feel quite ready to give up our social media accounts (or delete our partners online), Kerner says all couples should try out a digital detox, at least for a little while.

“When you add up all of the periods of distraction that devices give us, you might have a lot of time that you could put towards your relationship,” he says. “We live in a culture where sex ruts are epidemic and people go to bed too tired to make love — they have no time for each other. And yet they’re spending hours a day on social media, on blogs and on Netflix. Maybe we really need to figure out how to turn off that faucet.”