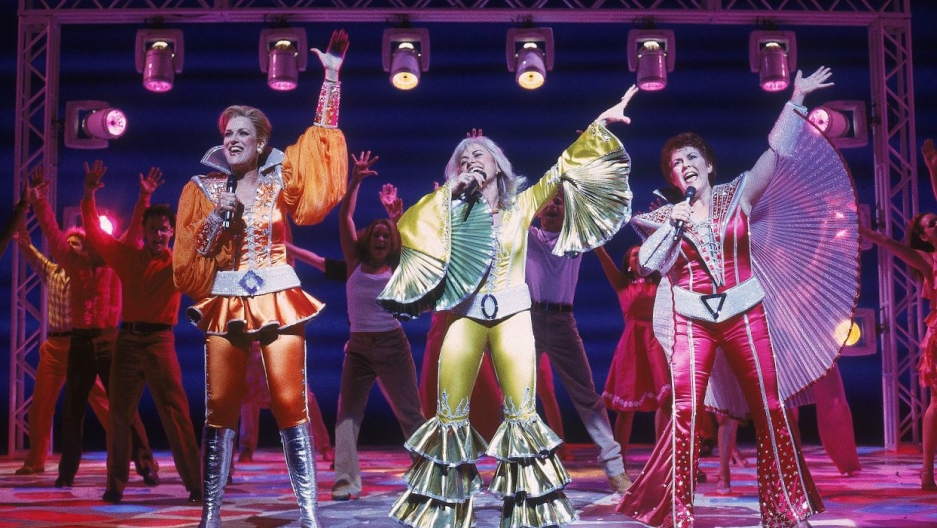 Among musicals that have found their way to Broadway, there are the hits and the flops. And then there are the shows that never seem to stop running --- Like Cats, which meowed on Broadway for 18 years, or A Chorus Line, which stayed alive and kicking for 15.

Known for its sparkly self-awareness, the jukebox musical Mamma Mia!belongs in the juggernaut category. The show has a flimsy plot --- Sophie needs to figure out which of her mother's three former lovers is her dad --- that ties together as many Abba songs as can be crammed into two and a half hours. And when the last sequin glimmers for Mamma Mia! this month, it will become the eighth-longest running show in Broadway history. It's the kind of success producers dream about.

But 14 years ago, New York audiences weren't so sure. Mamma Mia! had been a huge success in London, so there was a lot of anticipation for the show's Broadway opening in October, 2001. But after the terror attacks on September 11th, the atmosphere changed. "Even the rehearsing process became very different," says Karen Mason, who played one of the lead roles in the original cast. "Here we were singing kind of crazy, light songs, and our city and our world was so different now."

But the producers decided to forge ahead --- and Mamma Mia! became a Broadway smash, famous for people dancing in the aisles. "It was exactly what we needed," says David Meyer, who lived in New York at the time. "This was not Who's Afraid of Virginia Woolf? time. This was Mamma Mia! time."

Meyer became a Mamma Mia! superfan --- he's seen the show about 40 times. He likes its dependability, comparing Mamma Mia! to boxed wine. "A box of wine does not age, it does not mature --- but it also doesn't really go bad." he says. "It never attempted to be great theater. It attempted to be fun."

Eventually, ticket sales ebbed. In a recent review of the show, The New York Times wrote that the audiences had stopped dancing. But the show has a place in Broadway history, and not for a revolutionary score or heart-wrenching drama. Mostly, it was just a good time. And what's the harm in that?