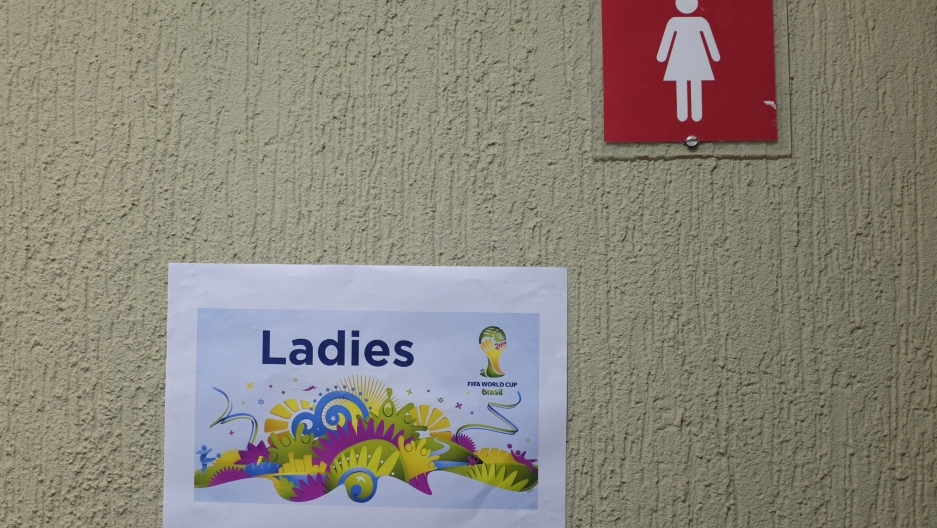 Signs indicating the women's toilet are seen at the media centre of Beira-Rio Stadium in Porto Alegre June 14, 2014.

“The vagina is cleaner than your mouth,” declared Sharon Hillier, addressing a group of journalists at the HIV Research for Prevention conference in Cape Town last fall. The audience squirmed, gasped and giggled.

The professor of obstetrics-gynecology and reproductive services at the University of Pittsburgh is known for her unabashed statements: She introduces herself as a vaginal ecologist and calls the vagina a “beautiful ecosystem.”

Hillier, 61, has spent close to three decades examining the curious lives of microbes that inhabit the vagina, and is one of the most prominent scientists in the burgeoning field of research into microbicides. The compounds, loaded into gels or rings, are designed primarily for vaginal application in order to prevent HIV infection.

No microbicide products are yet commercially available, but if one should pass clinical testing and receive regulatory approval, it could bolster the fight against AIDS. Indeed, 50 percent of people living with HIV worldwide are female. The figure rises to almost 60 percent in sub-Saharan Africa, where women are often unable to negotiate condom use with their partners.

“[Microbicides] could fill a really critical gap in HIV prevention, because the whole field is built on developing products that are in women’s control,” says Hillier.

Hillier’s drive to study female genitalia traces back to a medical conference that she attended in Seattle in 1983. At the time, she was a post-doctoral fellow in laboratory medicine and infectious disease at the University of Washington. She remembers one session in particular where she found herself at a table surrounded by many middle-aged, male scientists. Some of them opined that women who complained about vaginal itching and discharge were sexually repressed and suffering from sexual guilt.

Furious, Hillier told them they were off base. “I was appalled that these ‘learned men’ felt that women’s symptoms could be attributed to guilt or sexual repression,” recounts Hillier. “It was at that moment I decided a woman’s voice was needed to shed light on these common conditions in women.”

Hillier spent the first few years of her career intently studying vaginal microflora and understanding factors that made women less likely to get sexually transmitted infections such as gonorrhea, chlamydia and herpes.

Her interest in the “secret garden” (another of her catchphrases for the vagina) led to her focus on female-targeted HIV prevention during the late 1980s. At that time, researchers were beginning to understand that AIDS — which was first reported in 1981 — wasn’t just a disease limited to gay men and had started looking into the development of a prevention method for women.

In one early effort in the 1980s to develop a microbicide for women, researchers investigated the anti-HIV properties of a compound found in over-the-counter contraceptive gels and foams, called nonoxynol-9 (N-9). Its chemical structure is similar to that of a detergent, and it is quite active against HIV in the lab.

But research by Hillier’s lab, among others, discovered that N-9 wasn’t the game changer it was billed to be. The compound caused irritation at the vaginal surface, making the organ more susceptible to infection. (In 2005, Hillier co-authored a paper in the Journal of Acquired Immune Deficiency Syndromes reviewing the data.)

It became clear: “We needed better options than detergents as microbicides,” Hillier says.

Since 2006, Hillier has co-headed the Microbicide Trials Network (MTN), a consortium of organizations set up by the National Institutes of Health to monitor clinical trials on a new wave of microbicides.

“You need to know about vaginal flora in order to know how to protect it,” says Zeda Rosenberg, head of the International Partnership for Microbicides(IPM), a non-profit biotech organization focused on developing microbicides. “It was Sharon’s work on understanding vaginal flora that helps people design products that don’t disturb its healthy balance.”

Several new studies are testing the efficacy of antiretroviral compounds for HIV prevention. While proponents are hopeful that these medications will do a better job than detergents, they still face an uphill battle.

Take the case of tenofovir gel. Tenofovir is one of the active ingredients of the anti-HIV pill, Truvada. The gel was the first microbicide shown to successfully prevent HIV infection in a small South African study in 2010. Subsequent studies haven’t been able to duplicate the success, however.

“We were all heartbroken,” says Hillier. “What this basically meant was that the prevention needs of these women were still unmet.”

It turns out that many participants in those studies didn’t actually apply the gel regularly — and they hid that information from the investigators because they didn’t want to lose access to health services that were offered free during the trials.

The researchers learned that the women found it hard to stick to the strict daily regimen of applying the gel to their lady parts. For instance, privacy was a concern (the participants were poor and lived in small homes, sometimes with their parents). Moreover, men in sub-Saharan Africa often don’t approve of such methods, and women can’t hide the gel — which must be applied before and after sex — from their partners.

Hillier hasn’t given up, however. As part of her Plan B, she is now re-orienting her attention to another product in her arsenal: the vaginal ring.

The ring is an import from the family planning world, a field that fascinates Hillier because it has succeeded in providing women with birth-control options that don’t need to be used every day. Once inserted into the vagina, the ring — a hormonal form of contraceptive — lasts for 21 days, at which point it must be removed and replaced with a new one.

“The ring is just a much easier option that fits into the lives of [especially] young people, who may have chaotic lives,” says Hillier.

Now, the fate of the microbicide field hinges on two Phase III clinical trials in Africa, one monitored by Hillier’s Network and the other by Rosenberg’s IPM. The former has enrolled around 2,700 women in Malawi, Uganda, Zimbabwe and South Africa — all countries with a high number of women at risk for HIV infection. Meanwhile, about 2,000 women are participating in the IPM study at six sites in South Africa and Uganda.

Both trials are testing a plastic ring that, like the contraceptive kind, is inserted into the vagina. But in this case, it releases an antiretroviral drug called dapivirine over the course of a month. Dapivirine prevents infection by stopping HIV from replicating after it enters a healthy cell.

The results of the two studies are expected to arrive as soon as 2016. If they pan out, a licensed product could make it to market by late 2017 or early 2018. Future versions of the ring would provide protection for as long as three months. Hillier’s ultimate goal — her holy grail — is to offer both contraception and HIV protection in one ring.

Hillier’s leadership skills and “political sense” have helped the field survive, says Ward Cates, president emeritus at the global health and development organization FHI 360. “Sharon always has a firm direction to go to,” he says, but when necessary, “she won’t mind making a compromise along the way.”

For Hillier’s part, she firmly believes that an effective microbicide could do for HIV prevention what the pill did for contraception. “As a woman,” she says, “I feel fiercely that we should not have to rely on a man using a condom to take care of ourselves.”