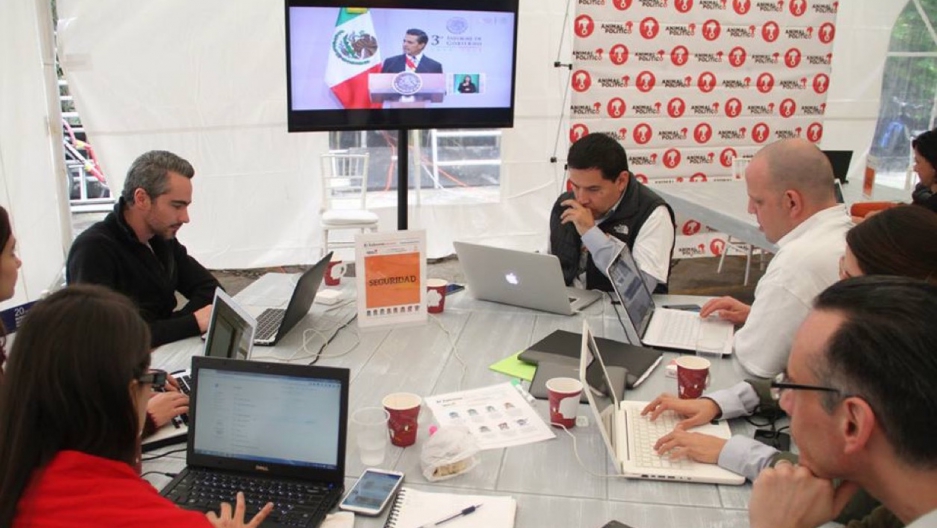 MEXICO CITY — Mexico is finally at peace, if you ask the president.

“Today, it is a fact that violence is decreasing in Mexico,” President Enrique Peña Nieto said Wednesday, in a section of his state of the nation address titled “Mexico in Peace.”

Then he claimed that last year’s homicide numbers had dropped 24 percent since 2012.

Gathered around a table watching the live feed in another part of the capital, a group of skeptics are shaking their heads, and get to work crunching numbers. It’s their job to sniff out true and false from the president’s speech.

More from GlobalPost: These are the signs Mexico is finally taking its corruption problem seriously

Animal Politico launched El Sabueso as an online column at the beginning of 2015 in the spirit of fact-checkers like Politifact. Every couple weeks, it takes a statement from a Mexican politician and ranks it on a scale from “True” to “Deceptive” all the way down to “Ridiculous.”

The bloodhounds are divided into eight tables, each covering a topic such as human rights, health, or public spending. The security table doesn’t seem convinced by Peña Nieto’s boasting about violence reduction.

While some of it is true, other claims stick out as dubious, says Jonathan Furszyfer, a researcher at Mexico Evalua.

“We’ll have to corroborate the data,” he says, combing through homicide figures. “And some others will fall into the category of ‘Cannot confirm’ or ‘Deceptive.’”

The time is ripe for scrutinizing politicians here. Mexicans are losing confidence after a host of problems: the disappearance and alleged murder of 43 students at the hands of authorities; the army executing suspected criminals, then apparently covering it up; the president himself wrapped up in a conflict-of-interest scandal over his multimillion-dollar mansion.

Now halfway through his term, Peña Nieto’s approval rating stands at just 35 percent. As in neighboring Guatemala and a number of other Latin American countries, protesters here have also clamored for the president's resignation over lots of grievances.

“We can’t stay in this passive state of receiving information, figures, and supposed achievements of the government and simply transcribing them like a large portion of journalists do,” he says.

After Peña Nieto’s speech Wednesday, the fact-checkers start poring over spreadsheets, graphs, and charts, which they'll continue into Thursday. The security table corroborates the president’s claim that murders fell from 2012 to 2014, but they find something else that’s startling: Murder data for this year — it’s back on the rise.

The security group calls it: the president’s “violence is decreasing” statement ranks as “Deceptive.”

By Thursday, El Sabueso has published over a dozen rulings on dubious statements from the president. Some they declare True, such as one saying government programs helped 33,000 people with disabilities find work. Others they decree “Unable to prove,” like his assertion that 11,000 public schools provide food for students. The bloodhounds say that information doesn’t exist publicly.

“I think this helps create a critical public,” says Moreno, the editor. “A public that not only receives information but can actually do something with it.”

He also hopes that next year the president will think twice before bending the truth.

Check out this AJ+ video of the bloodhounds hard at work:

The images in this story are published with permission from Animal Politico Editorial Team.