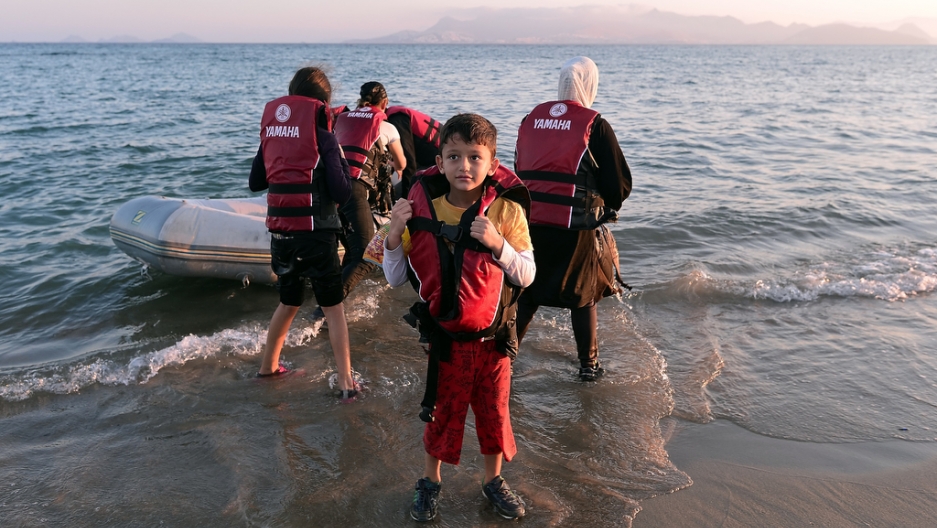 A group of migrants arrive on a beach on the Greek island of Kos on Aug. 18, 2015.
Credit: LOUISA GOULIAMAKI
Share

It has been described as the moment "humanity washed ashore."

Heartbreaking photos of the tiny body of a 3-year-old Syrian boy lying face down on a Turkish beach have moved the world this week, in a way that countless photos of other refugees who drowned trying to cross the Mediterranean Sea have not.

The boy, identified in media reports as Aylan Kurdi, died alongside his mother and 5-year-old brother when the boat they were traveling in from Turkey to the Greek island of Kos sank in the early hours of Wednesday.

His father survived the tragedy.

More from GlobalPost: 'My children slipped through my hands': Father of drowned Syrian boy

Using the hashtags #DrownedSyrianBoy, #AylanKurdi, #KiyiyaVuranInsanlik (Turkish for "Humanity Washed Ashore") and #SyriaCrisis, people around the world have flooded Twitter to express their grief at the toddler’s death.

Twitter users, including many artists, have also used the platform to vent their anger at the world’s failure to deal with the escalating migrant crisis in Europe — and the ongoing conflict in Syria, which has been raging for more than four years and is the source of many of the refugees trying to reach the European Union.

It's not just fumbling politicians who are being blamed for this latest tragedy and the worst migration crisis since World War II.

Social media users are holding everyone responsible for the deaths of Aylan and the countless other children who have died trying to reach Europe.

"No one puts their children on a boat unless the water is safer than the land." #SyrianRefugees #DrownedSyrianBoy pic.twitter.com/F76TVAOZzE

More than 350,000 people have crossed the Mediterranean from North Africa and the Middle East so far this year, according to the International Organization for Migration.

At least 2,643 people have died making the perilous journey, accounting for more than 70 percent of migrant deaths worldwide.

The lifeless body of Aylan has come to symbolize the excessive suffering of these people, most of whom are fleeing war, violence and poverty in their own countries.

Some artists have used the troubling image of the toddler's body to attack the hardline policies adopted by some countries in the face of mass suffering.

This cartoon, showing a redrawn world map — a wall topped with razor wire separates Aylan’s body from the rest of the world — condemns the entire global community for abandoning refugees, while also making a sharp, implied critique of countries like Macedonia and Hungary that are attempting to stop refugees from crossing their borders.

But the death of little Aylan and the grisly discovery of 71 bodies, believed to be mainly Syrian refugees, in the back of truck in Austria last week has ratcheted up pressure on European politicians to reach a consensus on how to handle the crisis that is overwhelming a small number of EU countries.

Some social media users have suggested that this haunting photo of Aylan could be the image that finally shocks the world into action, just as other powerful images of children enduring unimaginable suffering have done in the past.

Today I thought of 2 other tragic pics that opened the world's eyes. Don't close your eyes! #KiyiyaVuranInsanlik pic.twitter.com/cUn53psY4V

It appears to be working.

On Thursday, UK Prime Minister David Cameron, who has been strongly criticized for Britain's feeble response to the migrant crisis, agreed to allow more Syrian refugees into the country.

Germany and France, meanwhile, called for binding migrant quotas within the European Union that would oblige member countries to accept a certain number of people.

It's a good start, but it comes too late for Aylan.