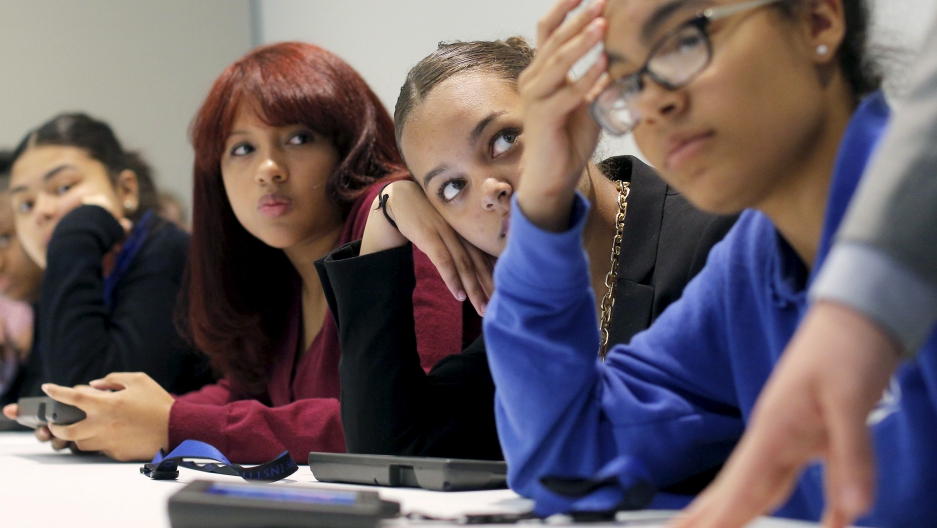 High school students from the City on a Hill Charter Public School in Boston play the role of US senators as they work to pass an immigration reform bill during a mock legislative session of the US Senate chamber at the Edward M. Kennedy Institute.

As demographics shift and the number of first- and second-generation immigrant children entering the US public school system grows, schools are realizing they play a pivotal role in not only educating kids, but in also helping parents navigate a tricky system.

It's a system that Montserrat Garibay knows very well: first, as a first-generation student growing up in Texas and, now, as a teacher and vice president of Education Austin, the labor union for employees of the Austin Independent School District. Garibay describes herself as someone who has lived through the experience that so many of her students go through today.

"I remember riding the big yellow bus and having no clue," Garibay says. "I literally spoke no English and just seeing the school with so many kids and just standing there, kind of like, ‘Where do I go?’"

Once inside, Garibay says those fears didn't subside because she hd trouble understanding her teachers as they spoke, comparing the experience to watching a cartoon.

"They would just move their mouth, and I would be like, ‘What are they saying? I have no clue,’" Garibay recalls.

But there was one teacher Garibay was able to understand: her ESL teacher. And she says that relatonship helped her navigate scary waters that included basic tasks like knowing where to go once the school bell rang at the end of the day.

"I felt like I was very lucky because I know students that never had that. They were literally dropped outside that yellow bus and they had no clue where to go. They didn’t have that support system that I had."

Garibay credits having a good teacher in her life as the reason she was able to graduate, and it's why she decided to become a teacher herself.

"Kids that look like me could have someone that would just be there for them without judgment and just realizing through that support they could graduate, just like I did," Garibay says.

Related: Teaching a global nation: Supporting immigrant students in a place where they are not the minority

As a teacher in Austin, Garibay says she deals with many mixed-status families whose members include people with different immigration and citizenship statuses. The US Census Bureau estimates that 9 million people live in such families. And it can bring a host of issues that can trickle down to the classroom. One example Garibay cites is that many parents of her students don't have a driver's license or identification, which can make even the simple task of driving their child to school not so simple.

“The police works very close with Immigration and Customs Enforcement," Garibay says, "so if they get stopped, for instance, they can take them to jail and they can be deported in 48 hours."

Garibay says deportations do happen and they've made a lot of parents afraid of driving their children to school. Not long ago, Garibay had to intervene in such a case.

"The mom was bringing him and, all of a sudden, the child didn’t show up for a week, a week and a half. So, I called the parent, just asking, ‘Hey, what’s happening to the child? Why is he not showing up to school?' And the mother answered the phone and said, ‘Well, Ms. Garibay, my husband was deported and right now we don’t have the keys of the car.' The dad was driving, and the dad was going to work and he got stopped.”

Garibay says the mother also did not have any identification and couldn't get the keys from the police. So Garibay went to the police station on the family's behalf to retrieve them. Her principal later warned her about getting involved in such immigration matters, because she's not a lawyer. But Garibay says she argued that it affected her being able to teach the student.

“It goes beyond our classroom, and we can’t only just focus on teaching math and science. We also need to look at the reality that our students living every single day.”

This story first aired as an interview on PRI's The Takeaway, a public radio program that invites you to be part of the American conversation. Share your thoughts and ideas on Facebook at our Global Nation Exchange, on Twitter @globalnation, or contact us here.