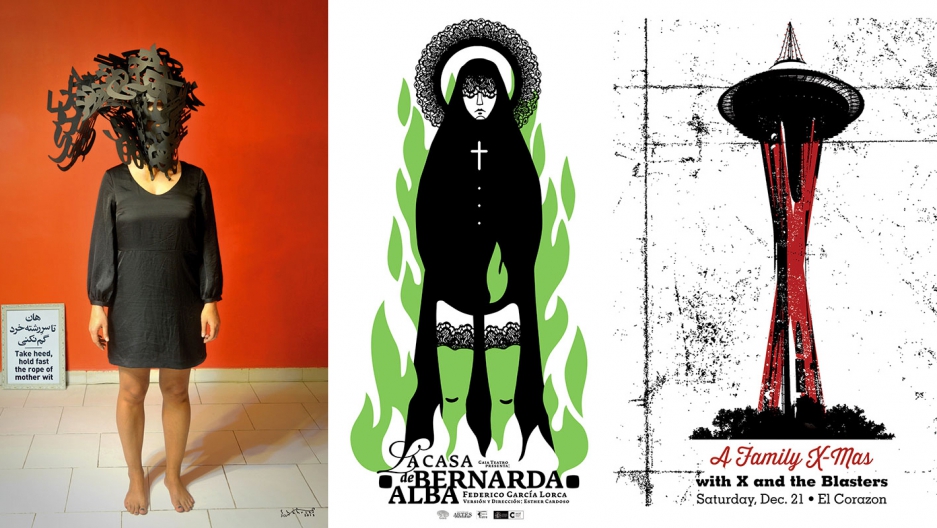 What do you get when you combine poster designers from Seattle, Havana and Tehran?

A SHT Show of course.

Seattle-based curator and designer Daniel Smith first came up with the idea for a Seattle–Havana–Tehran Poster Design Show 10 years ago when he visited Cuba on a cultural exchange.

“In that visit I saw how amazing the work was and saw that what was happening was very similar to what was happening in Seattle, in terms of silkscreen posters and incredible poster content. I thought we really have to get together and exhibit as one,” says Smith.

“Ellie Goulding” by Jon Smith in Seattle (pink stripes); “Hippies” by Fabian Muñoz in Havana (roller-skates); “The Individual Is Always the Exception (In Memoriam of Morteza Momayez) by Homa Delvaray in Tehran (unicorn).

“I had no information about what was happening in Seattle at that time,” says Menéndez, “Dan told me about this music scene poster production and I was really surprised and excited to be part of [the show] from the beginning.”

They both ended up curating a Havana–Seattle show together in 2008, which was a huge hit in both countries.

Smith then started collaborating with Iranian designer Iman Raad to curate a show of American and Iranian poster designers. Then Smith thought why not curate a show with designers from all three countries.

“In Havana and Tehran the design community is pretty small. In Seattle there’s a pretty tight poster-making community around music, so it’s very possible for us to look at what’s happening in our cities and to grab posters and images and start playing,” says Smith.

“Blondie at Marymoor” by Ames Bros in Seattle; “Metalros” by Raúl Gonzálex in Havana; “Jewelry as Sculpture 2” by Mehdi Fatehi in Tehran.

Smith, Menéndez, and Raad started sending posters to each other via email. They went through hundreds upon hundreds of designs until they found the posters included in the show.

When you see the posters from each country next to one another what’s surprising is not how different each design appears, but all of the similarities between the posters.

“It doesn’t surprise me any more that there are so many commonalities. When I went to Tehran, when I went to Cuba ,there are so many things that link us together that we’re not aware of — possibly because we never see these things in the media. At least in America we never see Tehran. I couldn’t imagine the city and the people. And the people are incredible and they want the same thing we want, better communications, better relations,” Smith says.

Speaking of better communications, the real work of curation began when Smith had to collect the physical posters. You can’t send mail between Havana and Tehran and the US so each poster had to be hand delivered.

“There’s nothing standing in the way of us working together. Working with the communists down in Cuba or working with the Iranians, there are no barriers to doing this except in trying to get posters to each other. But the beauty of a poster show is we can wrap it up in a tube and hand deliver it to each other,” says Smith.

The Seattle, Havana, Tehran Poster Design Show, or SHT Poster Show, opens this weekend as part of the Bumbershoot Festival in Seattle.

The SHT Show will travel to Cuba and Iran in the coming year.