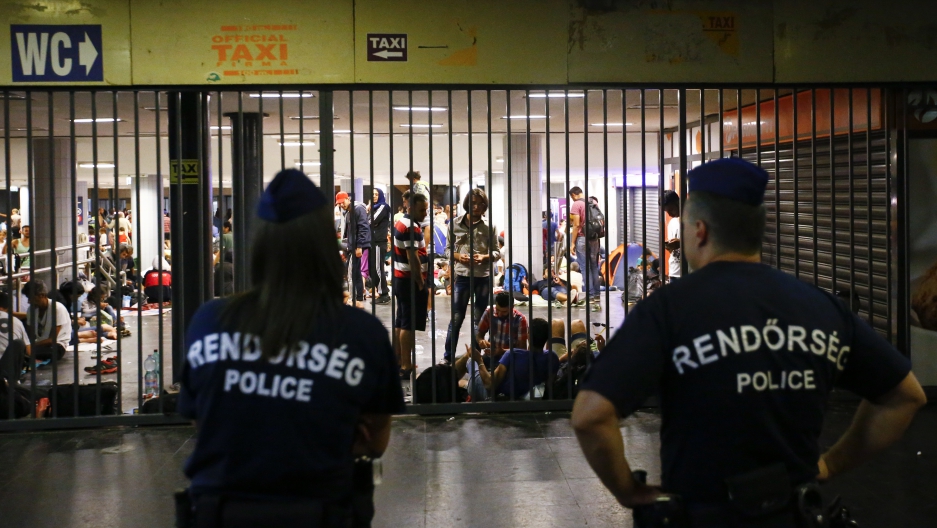 Hungarian police guard refugees at a makeshift camp in an underground station near the Keleti train station in Budapest, Hungary September 2, 2015.

A train station in Hungary is the latest place where the migrant crisis is playing out.

But for now, the trains aren't going anywhere.

Nabih Bulos of the New York Times has been following the migrants on their perilous journey through Europe and says the scene at the station is simply surreal.

“You’re talking about hundreds, if not thousands, of people congregated there, sleeping, eating and trying to make their way to Germany,” he says.

Bulos says it would be easy for Hungry to let these people move and make the journey to Germany. “For some reason, Hungary has taken it upon itself to be the bulwark of northern Europe. I’m not entirely sure why they’re doing that,” he says.

So for now people are waiting around and hoping they can move on soon.

Bulos says the long hours of waiting around are tough.

But at the same time, he adds, many of these people have fled a civil war. They don’t have much of a choice and they will do what it takes to get to their destination.

“These are people with identities and they had a life before this,” he says. “They try to maintain a semblance of that life in some shape or form.”

For example, Bulos came across one man who carried his hookah with him all the way from Syria to Hungary. Others sing songs and play card games to pass the time. Meanwhile, residents of Hungary have had mixed reactions to the current turn of event.

Bulos says while some donate money and try to help, others are overwhelmed. “[Some of them feel that] these people are defacing an ancient and, I guess, a very elegant train station and they are sabotaging the train station’s working.”

Bulos says the government in Hungary faces a difficult balancing act. “Do you try to satisfy the refugees who really are in need — but at the same time you have to satisfy your own populous who is very sad, but need to get on with daily life.” he explains.

Reconciling those interests is especially tough when emotions are running high. The images of drowning children and families slipping beneath barbed wire on Europe's borders are leading some to call on European nations to ignore their refugee quotas and procedures.

But others, like Jerry Kammer, a senior research fellow at the Center for Immigration Studies, say immigration restrictions and laws shouldn't be overlooked, despite the crisis. Kammer thinks fear and polemics are stymying a level-headed policy debate.

"There is an inevitable tendency, for well-intended reasons, to cast immigration as the story of vulnerable migrants seeking inclusion in societies and facing resistance from hard-hearted nativists or xenophobes or bigots," Kammer says. "All those labels ... have the effect of chilling the debate and make many people who would like to be part of a well-informed discussion fearful of entering into that discussion because they're concerned that they themselves might be labeled as a racist."

Kammer says there are "good liberal reasons" to limit immigration and ensure that immigrants who have gone through the proper channels have a better chance of success. He says unrestricted immigration will play havoc with labor markets, and stretch to the breaking point the bonds that link together neighborhoods, schools and healthcare systems.

"When you think of someone in a boat, that's foundering off the coast of Italy, or the coast of Libya trying to get to Italy, you absolutely must reach out and provide aid and comfort to those fellow human beings," Kammer says.