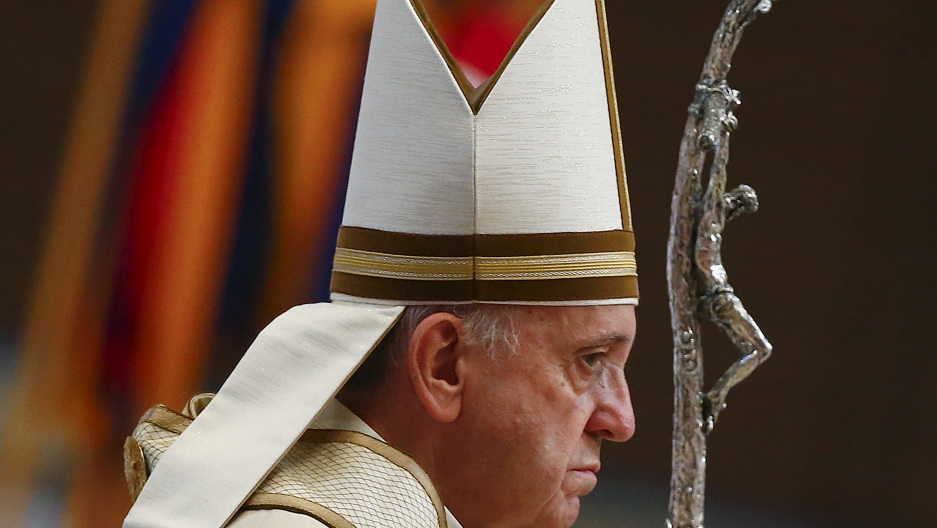 Pope Francis arrives to lead a mass marking World Day of Prayer for the Care of Creation in Saint Peter's Basilica at the Vatican September 1, 2015.

Pope Francis announced Tuesday that he will allow Roman Catholic priests to absolve women who have had abortions of their sins, if they seek forgiveness.

It's part of the Jubilee Year of Mercy — a special year for Catholics to receive blessings and pardons from God — which begins on December 8. Every 25 or 50 years since the year 1300 the Catholic church has evoked a jubilee year, as the National Catholic Reporter explains.

In a letter published today, Francis said he understands that some people approach abortions with "superficial awareness." He writes:

"I know that it is an existential and moral ordeal. I have met so many women who bear in their heart the scar of this agonizing and painful decision. What has happened is profoundly unjust; yet only understanding the truth of it can enable one not to lose hope. The forgiveness of God cannot be denied to one who has repented, especially when that person approaches the Sacrament of Confession with a sincere heart in order to obtain reconciliation with the Father. For this reason too, I have decided, notwithstanding anything to the contrary, to concede to all priests for the Jubilee Year the discretion to absolve of the sin of abortion those who have procured it and who, with contrite heart, seek forgiveness for it."

Though the news has been welcomed by some, Rev. James Bretzke, a professor of moral theology at the Boston College School of Theology and Ministry, says the pope’s announcement does not mark a doctrinal shift in the Church's teachings on abortion.

“This is a big deal, but I don’t think it should be misunderstood,” Bretzke says. “He is not saying that abortion is no longer a sin. What he’s saying is this is a real sin and we need to give the power to deal with that real sin to as many priests as possible so that everyone who needs to have this reconciliation can obtain it easily, and in a sense of mercy and forgiveness.”

Historically under church law, only bishops and certain priests had the power to absolve the sin of abortion. But Francis is extending that ability to every priest worldwide.

“Let’s use a business analogy: If you wanted to open a checking account, maybe you had to go to the bank’s main office,” Bretzke says. “Now, [Francis] is saying you can go to any ATM or any store — any place where there is a representative of the business. That’s really what he’s doing — he’s given this power not just to the branch office or the main office, but to every priest, wherever that priest is.”

Pope Francis has the ability to permanently delegate this power to all Catholic priests, though it’s still unclear if he will do so. And many Catholics in the United States are split on the issue.

Since he assumed his role in March 2013, Pope Francis has consistently shaken things up in the Catholic Church. He has criticized the “tyranny” of unfettered capitalism; he has tackled climate change and called on Catholics to be stewards of the Earth; he has sought to address clergy sexual abuse, and he’s touched on issues of divorce and homosexuality.

In the United States, Pope Francis’s more liberal stances on all of the aforementioned issues have caused a stir among conservative Republicans. And though this new announcement may complicate his trip to Congress later this September, Bretzke says that Catholic lawmakers must stand with the pope.

“If they’re good Catholics, they have to follow pope and the Gospel of Jesus Christ on forgiveness of sins,” he says. “This pope is putting the accent on forgiveness and mercy. Certain bishops and priests, regrettably, have put the accent in the past on punishment and excommunication. I think the pope is trying to say that we need a different approach.”