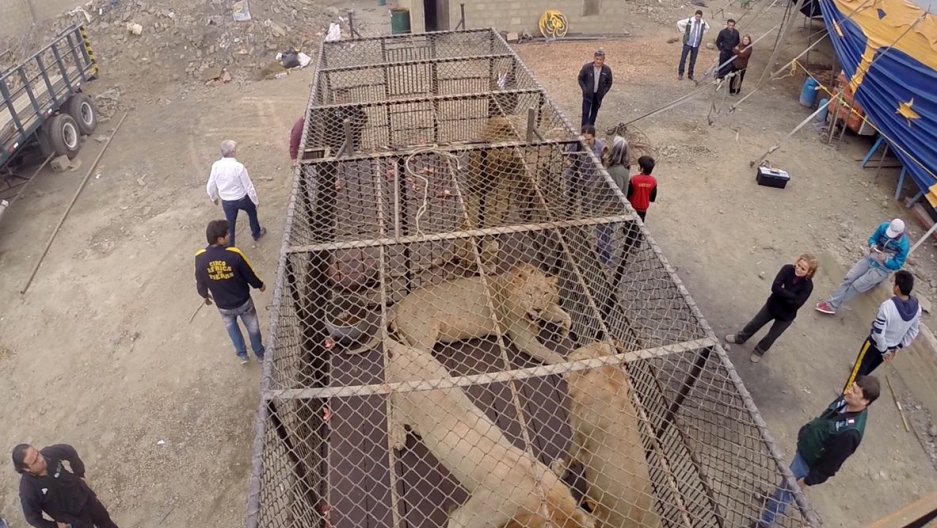 LIMA, Peru — After the shocking death of Cecil the lion this summer, here’s a rare piece of good news for Africa’s biggest cat. A total of 33 lions rescued from miserable lives in circuses in South America are heading home next month, back to Africa, in what’s being billed as the largest ever airlift of its kind.

Many of the felines spent years in Peru and Colombia being mistreated, underfed and forced to perform tricks for the public.

Working with local authorities, British group Animal Defenders International (ADI) has rescued the animals over the last couple of years, and is now organizing a charter Boeing 747 flight to South Africa.

There the animals will start a new life of relative freedom, in pristine African bush at the 12,000-acre Emoya Big Cat Sanctuary in Limpopo province.

Let’s bring them home! The 33 lions rescued by ADI from circuses in Peru and Colombia during the Operation Spirit of...

That’s the best possible outcome for the lions given that they would be unable to survive in the wild. Many were born in captivity and have never learned basic survival skills, including hunting.

But that may be the least of it. Almost all the lions had their claws removed in captivity and many have broken teeth. One is almost blind.

Emoya is a private reserve, off limits to the public. It also operates a no-breeding policy, putting it at odds with South Africa’s booming big game hunting sector.

That industry makes huge profits by rearing thousands of animals every year for wealthy tourists to shoot — the fate that befell Cecil in neighboring Zimbabwe. A rescued lioness at the Emoya Big Cat Sanctuary.

In a statement, ADI President Jan Creamer said she was “delighted” the lions are returning to Africa, where they belong.

“The climate and environment are perfect for them,” she added. “When we visited Emoya Big Cat Sanctuary we knew this is a dream come true for ADI and, more importantly, the lions.”

The sanctuary is owned and run by the Heuser family with financial backing from the public.

Creamer also praised the commitment of officials in Colombia and Peru to enforce new laws, brought in following ADI’s campaigning, that ban circus acts with animals.

Peru actually outlawed the practice in 2011. But many circuses refused to stop, and the animal rights group’s experts, accompanied by government officials and police, braved several violent confrontations with circus performers to rescue lions.

To avoid the crackdown one Peruvian circus even escaped to Ecuador, where it continues to perform.

In total, 24 lions were rescued in Peru and nine from Colombia. Roughly another 60 animals, including mountain lions and monkeys, were also saved.

The lions are currently recovering from their ordeal at a special reserve near the Peruvian capital Lima. With many of them malnourished and having spent their entire lives in tiny cages, vets are working to improve the animals’ muscle tone and overall health.

Originally, ADI planned to take them to a private reserve in Colorado. But when the opportunity at Emoya came, the group couldn’t pass it up. Another rescued lion at Emoya.

More from GlobalPost: These Peruvian circus lions could be headed to a new life in Colorado

The airlift is schedule for late October. ADI is still raising money for it — priced around $600,000 — but said it’s confident it will reach its goal.

“It is more expensive to relocate these animals to Africa, but who can put a price on taking them home to where they belong?” Creamer said. “It also sends such a clear and important message about protecting wildlife in their natural habitats and ranges.”

“They have a lot of lost time to make up for. They will live out the rest of their lives in a natural habitat, the closest they can ever come to freedom.”