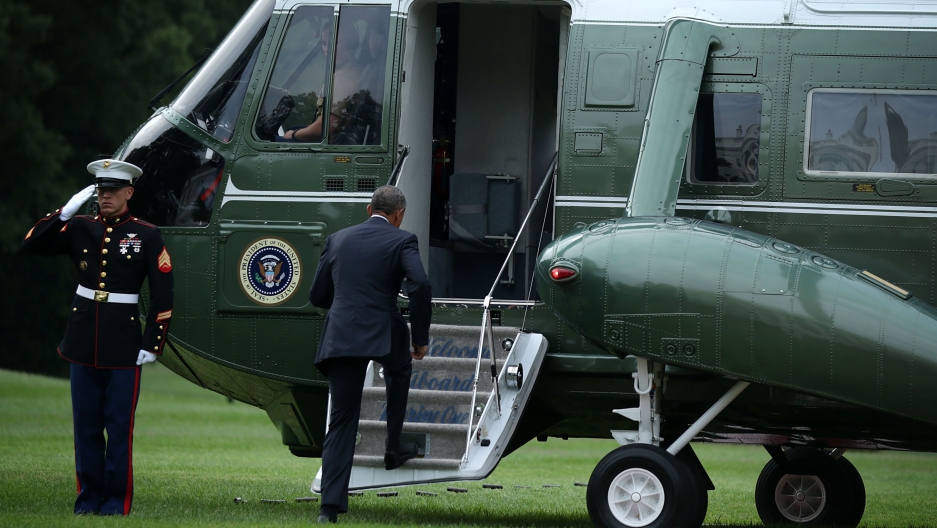 WASHINGTON, DC - AUGUST 31: U.S. President Barack Obama boards the Marine One prior to his departure from the White House August 31, 2015 in Washington, DC. President Obama is travelling to Anchorage, Alaska to address the Global Leadership in the Arctic: Cooperation, Innovation, Engagement and Resilience (GLACIER) Conference.
Credit: Alex Wong
Share

Editor’s note: US President Barack Obama and Secretary of State John Kerry are focused on climate change in Alaska this week, with both leaders in Anchorage addressing the Conference on Global Leadership in the Arctic. Alaska has shown some of the most pronounced symptoms of a changing planet, including loss of permafrost and sea ice along with eroding coastlines and threats to wildlife. Obama has made combating climate change a priority in his second term, but environmental advocates were baffled by the Obama administration’s approval of Shell's plan to drill in the Arctic’s Chukchi Sea earlier this month. The “Oil Rush at the Top of the World,” as GlobalPost's 2012 Special Report called it, is a fierce competition among countries, corporations, environmentalists and local communities with often competing agendas. Correspondent Caitlin McNally, who has reported in the Arctic and Antarctica for GroundTruth, visited Shell’s London headquarters this summer to better understand the company’s approach to expansion, climate and sustainability.

LONDON — The Royal Dutch Shell offices in London are housed in an imposing 1960s compound, about 30 stories high, overlooking South Bank and the London Eye.

The building’s air conditioning system is run by hydroelectric power from the adjacent River Thames.

This is one of the first tidbits I learn from Sally Donaldson, Shell’s cheery media relations representative who showed me around one day this summer.

The hydroelectric power was a revolutionary sustainable energy strategy for a major corporation over 50 years ago, she explains.

I see her point, especially considering the product Shell chiefly sells — about 3.1 million barrels of oil per day. Shell consistently ranks among the largest oil companies in the world, up there with America’s Exxon Mobil and England's British Petroleum.

And yet, as I walk through the lobby, I take note of large glossy posters papering the walls. One exclaims: “I’m a 16-year-old girl and I created a hydrogen powered car.”

There are no pictures of oil rigs. It’s all scientists in goggles and white coats holding up test tubes, and declarations lauding “10 years of carbon innovations” and the “Shell Eco-marathon.”

These images, which were not what I expected to encounter in the lobby of one of the world’s biggest oil companies, catch my eye because I’ve come here to learn about a concept that engenders cognitive dissonance upon initial consideration: Shell’s philosophy on climate change.

In March, I spent two weeks reporting for The GroundTruth Project on an expedition to Antarctica with — among 80 others — a climate change advisor for Shell, David Hone.

After the expedition, when I’d tell people about meeting Hone, their response was, first: Shell has a climate advisor? And then: Why did they send him to Antarctica?

All companies and countries on earth are prohibited from exploiting Antarctica, which belongs to no one, until at least 2041, at which point the international treaty preserving the wild continent as a reserve for “science and peace” will be up for negotiation.

When I raise this with Donaldson, the media liaison, she is quick to insist that Shell is not plotting in secret for that time 26 years from now when Antarctica may open up for oil drilling. Hone was on the Antarctica expedition because Shell’s commitment to sustainability “permeates the departments of the company,” as he himself put it. "Shell’s sustainability department is permeated through the company … it’s the bread and butter behavior of all the businesses within Shell, not a single department.”

Donaldson confirmed: Sustainability at Shell is not confined to a department, she says. “It’s inherent.”

On the Antarctica expedition, Hone’s role was to educate participants about the dire worldwide consequences should global temperatures rise on average two degrees Celsius above where it was before the use of fossil fuels, which began with the industrial revolution sometime after the mid 1700s.

Hone, a career Shell man and former engineer who has been working as a climate advisor for Shell since 2001, was the one who described to us how Antarctica holds the world’s largest store of fresh water. He also was the one who stressed to us, in measured and scientific terms, the disastrous consequences should Antarctic glaciers and sea ice continue to melt at the current rate.

Many of the statements he made as we examined calving icebergs and depleted glaciers could have come straight from the staunchest conservationist. The oil guy on our expedition was the climate change Chicken Little, warning of the sky falling.

“Antarctica is an inspiring place,” he said. “It’s better if we don’t know what’s there. We have the privilege to leave it alone.”

But just as David Hone spoke those words gazing out at Antarctic sea ice as a representative of Shell, other Shell employees almost 11,000 miles away in Alaska were making plans to drill in the Arctic pending a likely approval by the Obama administration that had billions of dollars in the balance.

Three years ago, I was in the tiny coastal Arctic town of Wainwright, Alaska, reporting with GroundTruth founder Charles Sennott on Shell’s plans to drill exploratory wells offshore, and what that might mean for the local indigenous Inuit population of hunters and fishermen. At the time, Shell was up against some serious hurdles: a snarl of permits that weren’t going through, sea ice that came in earlier than expected, and a rig that ran aground as it was traveling up from Seattle.

But Shell waited it out, and continued to invest in the venture — an approximate $7 billion dollars, making the well they will eventually drill possibly the most expensive on earth — with the belief that possibly up to one-third of the earth’s remaining untapped oil and gas reserves are in the Arctic.

In the end, the patience and tenacity paid off, at least for the near future.

In May, the US Department of Energy green-lit Shell’s provisional plans for exploratory drilling, including a proposed comprehensive spill response strategy.

As I wrote this, Shell’s rig, the Transocean Polar Pioneer, was approaching its destination 70 miles off the shores of Wainwright, Alaska. Some of the recently granted permits are annual and others are not. But after the lengthy and stringent permitting process, there's finally some time for Shell to see what's there.

If they hit oil, they’ll send the samples off to their geologists to take a look. And then it’s a long process — the company says it could be 10 to 15 years before actual production if and once the company finds what it believes is there.

Environmental organizations and local populations worry that Shell may not have developed sufficient infrastructure to handle drilling in an environment as unforgiving as the Arctic.

And one Bureau of Ocean and Energy Management analysis forecasts a 75 percent chance of a spill occurring in Arctic waters at some point after production begins. This analysis does not apply to the current exploration phase; but still, you can see how some people, especially those who live there, might find cause for concern when they look ahead.

Shell may not have everything in place right now, but they’ve got at least a decade to figure it out. And they’ve currently got at least enough safeguards in place that the US government has finally allowed them to go for it.

A decade seems like a good long while, certainly, and it will be easy to put Shell’s Arctic production plans out of mind for about 10 years while they prepare to open the spigot.

But here’s what many worry: If we keep saying we'll figure this out down the line, we eventually get to 2041, the year Antarctica could be opened up just as the Arctic has been.

By then, it is projected that there will be close to nine billion people on earth. Will we be so desperate for more fossil fuel we won’t be able to resist digging around on the last wild continent?

At Shell in London, it was made abundantly clear to me that the company accepts the fact of global warming and the consequences of climate change as a new normal.

As Donaldson put it, “we need to get a handle on CO2 emission.”

Various Shell departments collaborate every year to put out complex, sophisticated climate scenarios projecting what might happen over the next 35 years as the planet warms, and what it might mean for geopolitics and the corporate bottom line. Climate change is a reality Shell is already planning for:

"The climate change crisis is far from over. The decade 2000-2010 is the hottest ever recorded and data reveals each decade of the last 50 years to be hotter than the previous one. The planet is enduring more and more heat waves and rain levels — high and low — that test the outer bounds of meteorological study."

But part of this focus on climate change reality includes an unapologetic reminder to the world that Shell is, after all, an oil and gas company.

In February, Ben van Beurden, the company’s CEO, made a speech at the International Petroleum Week in London saying that oil and gas companies need to interject “realism” in to the debate.

“We’re not going to defossilize by 2050,” van Beurden declared. As the population increases, people need energy. Keeping all those resources in the ground is not, as Shell puts it, “realistic.”

Herein lies the rub for oil and gas companies today: at the very same moment you’ve got representatives in Washington lobbying the American government for permission to drill in the Arctic, you’ve got a climate specialist on an expedition to Antarctica stressing preservation and preaching about rising sea levels.

Like all the other big time fossil fuel players, Shell walks a fine line. In time, it will only get finer.

While David Hone and I were in the Antarctic, warming climate conditions caused an iceberg the size of a city block to break off the ice shelf. It floated right past us.

When that iceberg melts, it will turn into millions if not billions of gallons of water. That would be enough to run the hydroelectric-powered air conditioning system at Shell’s London offices for many years to come.