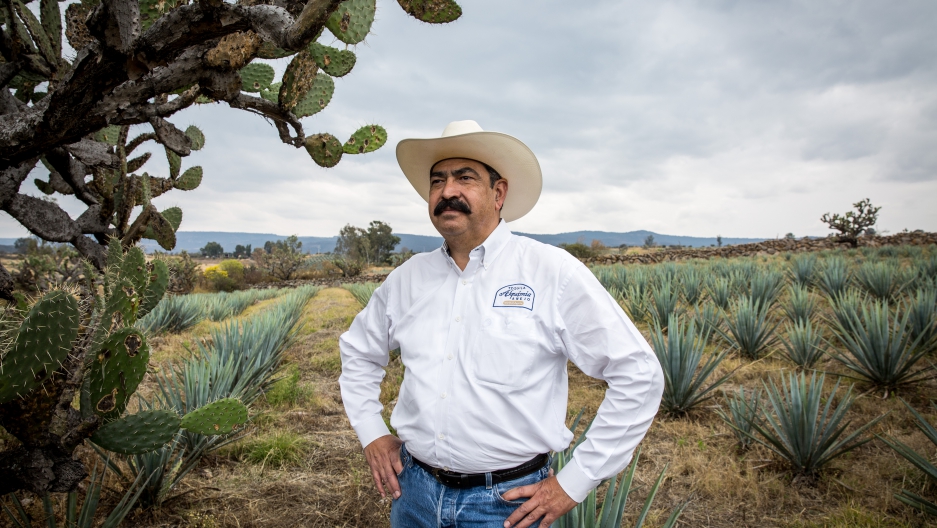 Tequila grower Adolfo Murillo at his agave fields near the village of Agua Negra in Jalisco, Mexico.

Tequila can have a pretty rough reputation as far as spirits go. But have you ever had really good tequila? Perhaps an organic brand?

Mexican tequila producers are hoping their high-end products will appeal to Chinese consumers with a strong desire for Western luxury items. The Mexican government recently negotiated an end to Beijing's ban on the liquor. (China had longed tried to protect its sprits, but has now lifted its ban on tequila.) Soon, China could become the second-largest export market for Mexican tequila, behind only the US.

Selling to China wasn’t the original intention of organic producer Adolfo Murillo, who has created an award-winning brand, Alquimia. Murillo, who has a doctorate in optometry from UC-Berkeley and resides in California, created his organic brand to help give back to his native community in Jalisco, Mexico.

“The thing that’s really remarkable about the brand (Alquimia) to me is that while it’s tapping into this demand for organic product, what it’s doing at the same time — when you say we’re not going to use chemicals, we’re not going to grow our plants in that way — it requires much more field labor. And what’s that done is create jobs,” says Ted Genoways with the Food and Environment Reporting Network.

Genoways profiled Murillo in a collaboration with Mother Jones. Here's an exerpt:

Murillo was determined to show that his organic methods yielded a better product. He started Alquimia (a nod to Paulo Coelho’s novel The Alchemist, whose protagonist pursues an impossible dream) while still maintaining his optometry business in Oxnard. Now, he jokes, “I help people see twice as well during the week, and then I help them see double on the weekend.”

In just eight years on the market, Murillo’s brand, Alquimia, has won 35 gold medals in international contests, including best in show for its extra añejo—the classification for tequila aged in an oak barrel for more than three years—at the San Francisco World Spirits Competition in March. The key, Murillo told me, is in the high sugar content of his plants. Many larger distillers have embraced the extra añejo category, because strong oaky flavors can mask poor-quality tequila, but the natural flavor of the plant is overwhelmed. “If you age tequila too aggressively,” Murillo told me, “you lose the agave characteristics.” To demonstrate the contrast, he poured his añejo into plastic tasting cups perched on the armrest between our seats, somehow topping off each shot as he braked and eased around craters in the blacktop.

But if somebody drinks organic tequila with a non-organic lime, is the drink still organic? Or is it better just to drink the tequila without the lime?

“Absolutely unadorned,” says Genoway, without hesitation.  “I think it would be criminal to have a lime.”