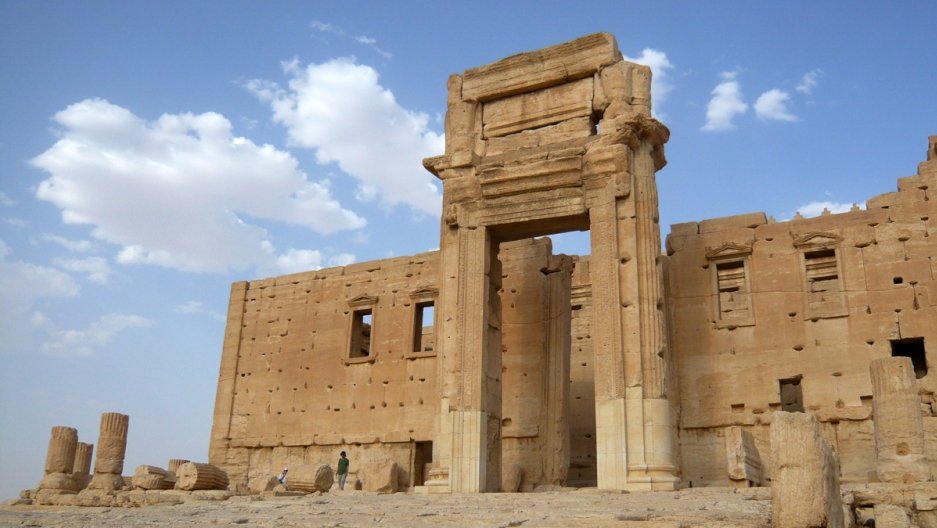 The Temple of Bel in the historical city of Palmyra, Syria, August 4, 2010. UNITAR has confirmed with satellite images that ISIS has destroyed the ancient temple.

There was a powerful blast on Sunday in the ruins of the ancient city of Palmyra and now another site of cultural importance has been mostly reduced to rubble — the Temple of Bel.

Considered one of the most prominent sites in Palmyra's archaeological complex, satellite photos released by the United Nations Institute for Training and Research show the blast destroyed the complex's main building.

Palmyra's ancient city, a UNESCO World Heritage Site, is the location of important ruins from the first and second centuries. Before ISIS took control of the city in May, more than 150,000 tourists visited Palmyra every year.

The Temple of Bel was dedicated in AD 32 when Tiberius Caesar ruled the Roman Empire. And, although the Temple of Bel "doesn't have the resonance of the Pantheon in Rome," Holland says, "it is on that level. It is that significant. This is one of the most significant pieces of architecture of the 1st century."

Palmyra’s Temple of Bel withstood 2,000 years of war and invasions — until the Islamic State http://t.co/Lj2EoNuvkF pic.twitter.com/fpFJSAtjU7

The Temple of Bel, a Roman-era structure devoted to a Semitic deity, is only the latest atrocity in Palmyra, which is being systematically destroyed by ISIS militants. Less than a month ago, Syrian archaeologist Khaled al-Asaad was brutally killed. The militant group beheaded Asaad, the foremost expert on Palmyra history, and then hanged his body from one of the Greco-Roman columns in the ancient city.

The extremist organization killed Asaad for trying to protect antiquities from ISIS, which has ransacked the ancient site. And the Temple of Bel isn't the first structure to meet a tragic demise. ISIS has also released photos of explosions at the Temple of Baal Shamin in Palmyra, which UNESCO has called a war crime.