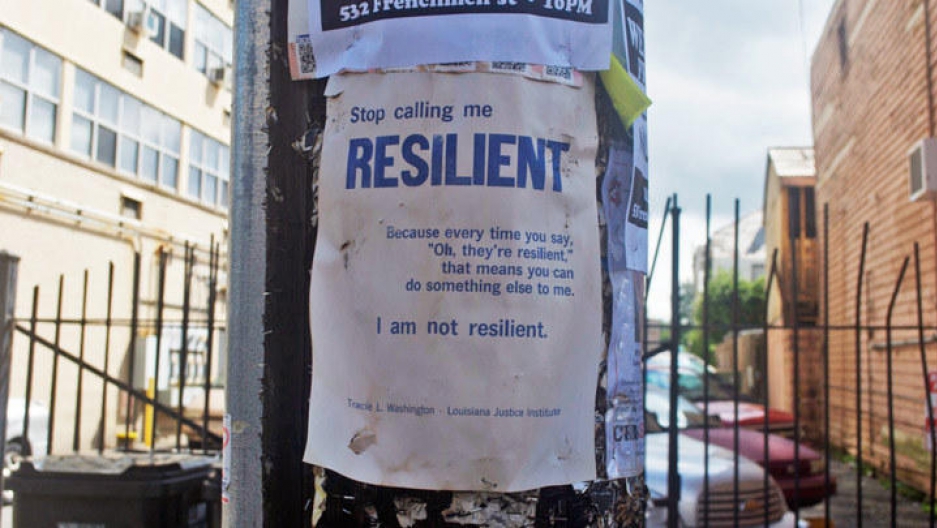 An "I am not resilient" sign on a New Orleans street post. The quote is credited to Tracie Washington of the Louisiana Justice Institute.
Credit:

Bostonians, in the aftermath of the Marathon bombing, like to remind themselves that Boston is Strong. A similar sentiment is echoed hundreds of miles to the south in New Orleans 10 years after Hurricane Katrina. Its slogan is Resilient New Orleans.

On the surface, puritan Boston and rollicking New Orleans would seem to have little in common, other than rich maritime histories. But the old colonial capitals of New England and New France are also wedded by trauma. Boston’s wrought by terrorism; New Orleans’s by natural disaster. And both cities have had to answer a hard question: After a city unites in the face of trauma how do you keep it united?

New Orleans artist Duane D. Conrad says residents are united in their love for this city.

“My brothers tease me all the time. Why do you like New Orleans so much? Man, I’m like ‘I fell in love with it. And, this is home. There’s no place like this place.'"

Conrad, standing outside a gallery in the French Quarter, exemplifies this city’s come from behind spirit. He was among thousands whose lives were greatly altered by Katrina 10 years ago.

“Oh yeah. I lived in the Lower Ninth Ward all my life. Loved that area. Loved the people. Loved my families there. But yes, we had to vacate."

He lost his home, but Conrad is back in business. The French Quarter — barely touched during the storm but impacted nevertheless — is also back. And the infamous Louisiana Superdome not far from here, where so-called refugees in their own city survived hellish conditions — has long been restored to what it was meant to be — a stadium.

“The people of New Orleans have done something really miraculous.”

Related: Marco Werman: It's about the flood, not the storm

“We realized that it took a lot of years for the city to deteriorate and we chose not to build the city back the way it was. We chose to build it the way it should have been.”

But if built “The way it should have been,” says Conrad, it would be inclusive of all its residents. And that, he argues, despite his love for this city, is not New Orleans today.

“You know you have those that have and have-nots and those who have a lot. So we still got a lot to learn. We have to learn to pull together more. And these past few years I haven’t seen it. And that’s what hurts.” 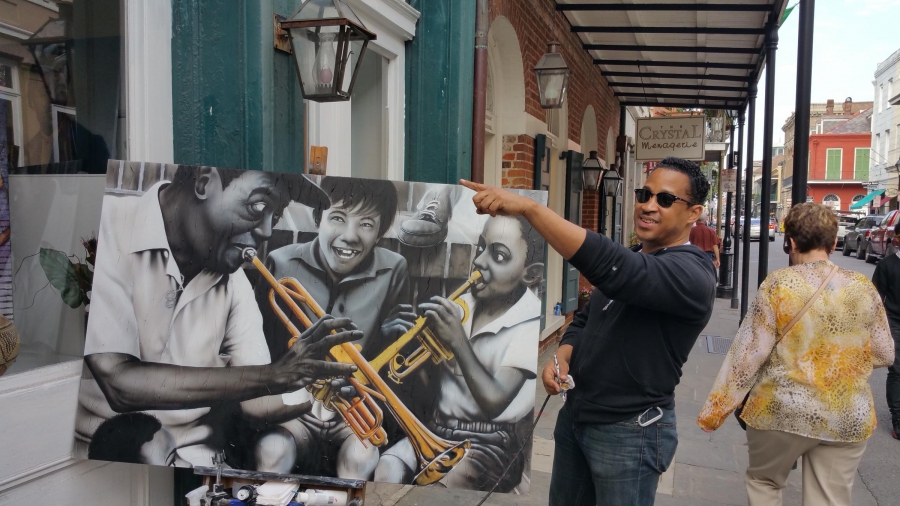 The slogans that have bolstered spirits in the aftermath of tragedy — Resilient New Orleans and Boston Strong — suggest unity, but some like Bostonian Alex Ponte Capellan are pushing back against the very notion.

“These messages kind of distract people from what’s really going on. And it’s just a marketing campaign to get everyone thinking that everything’s fine and dandy when there’s real issues happening, like gentrification."

And that, says Alex Ponte Capella, a 21-year-old housing activist, is the crisis facing both New Orleans and Boston: Poor and working class residents pushed out by rising rents and gentrification:

“Things that are happening in New Orleans is just a way for people to come in and take over," he says. “People are stranded and a lot of homes were destroyed and it just gives people room to come in and swoop in.”

Ponte Capella is one of several activists who camped out recently to protest a planned housing development in Jamaica Plain's Egleston Square that they complain provides little in the way of relief for poor people in the area surviving on less than $25,000 a year for a family of four. He says New Orleans and Boston have much in common: 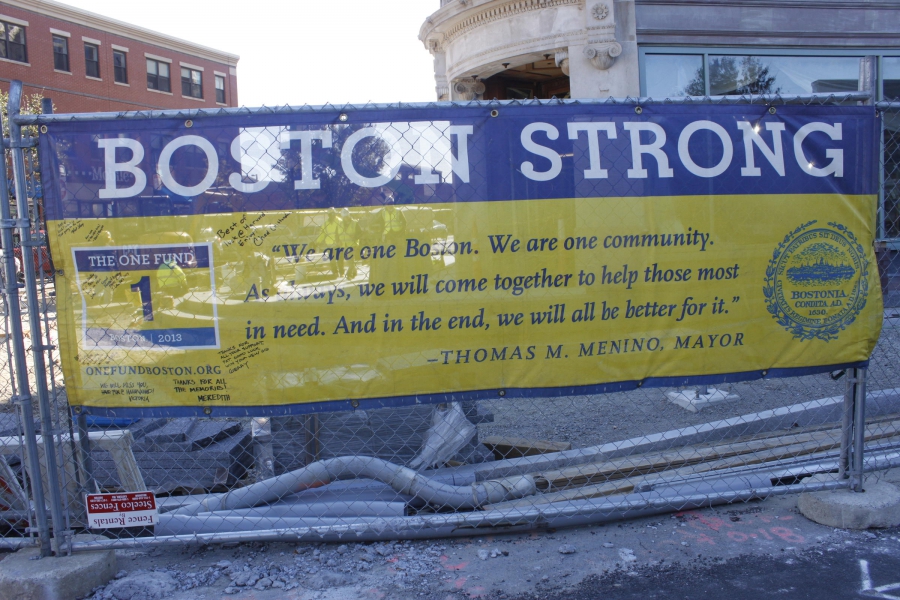 A Boston Strong banner posted at a construction site in Roxbury's Dudley Square neighborhood in 2013.

It’s a concern echoed by Conrad 1400 miles away in New Orleans: “Since Katrina you see the gentrification that’s going on in this city and it’s rampant.”

Before the levees broke, New Orleans was 66 percent African American. Today, it’s less than 60 percent — a loss of about 100,000 black residents. They have been replaced by thousands of young white artists and professionals pouring into the city.

Luther Gray was among those who left the city. “We had eight feet of water in our house. I have two sons. My wife, myself, we loaded everything we had. You know my wife’s family lives about 60 miles between here and Baton Rouge in Gonzales, Louisiana. So we went there and we realized after the third or fourth day after Hurricane Katrina, ‘Wow, were going to have to enroll our children in school out here.”

Luther Gray is the curator at the Ashe Cultural Center — a noted African-American landmark near the Industrial Canal. His family found its way back, but he laments those who never returned or are being pushed out by high rents. He says the wealth moving in leaves New Orleans poorer for it.

“Oppression has been long lasting here. And there has not been much economic equity, but this is where our rich culture comes out of — the poor neighborhoods.”

Mayor Landrieu puts a different spin on the demographic changes.

“It’s still a majority-minority city. That’s never changed. We have about 90 percent of our people back — either physically in New Orleans or in the surrounding counties, what we call parishes. It’s about 1.4 million people are back.”

And what some residents of the city see as gentrification, Landrieu sees as restoration and the resilience reflected in New Orleans’s optimistic slogan.

“What Katrina did was it really held up a mirror and it forced us to look at ourselves and it forced us to acknowledge that for 40 years we have been treating each other poorly,” says Landrieu. “We haven’t been creating the jobs that everybody needs, that political leaders and business leaders had made bad decisions. Although we still have significant problems in the city — of crime, of violence, of racism — the city has made tremendous strides in preparing itself to be a 21st century city. It’s been a pretty amazing story of resurrection and redemption.”

Related: 'Tomorrow is not promised' — What Katrina brought to my father

In Boston and New Orleans, Black, Latino and Whites are of different minds about the strength of a city to bounce back from trauma and how that affects the actual meaning of resilience. In Boston, Mildred Rodriquez, a low income tenant in Roxbury whose landlord is threatening to double her rent, says Boston would only be strong if its poorest residents — Black, Latino, White and Asian — were to unite.

“Boston Strong was a very reactionary slogan. There is an attack and the idea then is to get people to come together. But we want to sort of build a fight that’s more sustainable and consistent. That doesn’t wait for something to happen in Egleston or JP or Boston in general, but try to prepare for decisions being made about our community without our consent." 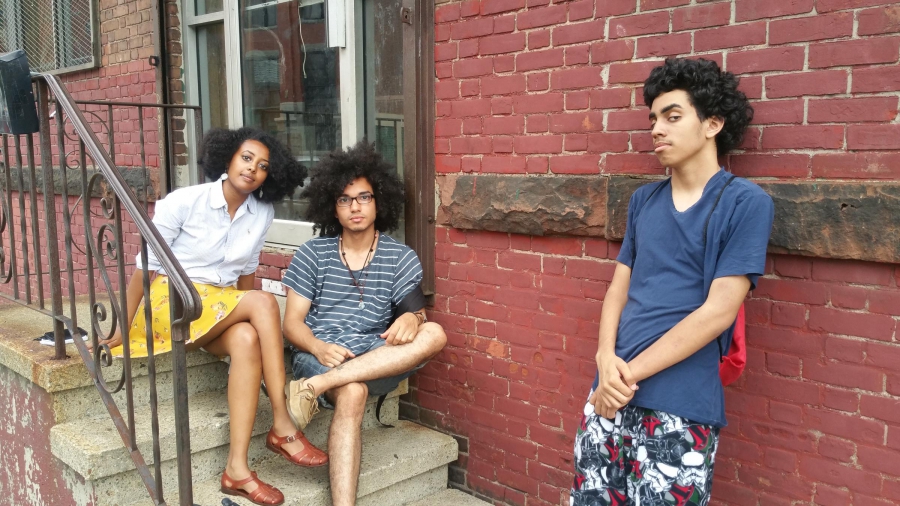 Related: This woman's job is to make Boston stronger

In New Orleans, a CNN-USA Today poll found that a majority of whites believed the city had bounced back, while a majority of blacks did not. A resilient New Orleans to Grey at the Ashe Cultural Center could only mean one thing:

“Where we are now is working toward equity in New Orleans where no longer will Whites control everything and Blacks are just subservient. We really want to be equal partners since, of course, we create most of the culture, including a lot of the food. Katrina was a turning point and we’re trying to recreate the city in a better way. In a way that we can all see the future.”

Landrieu — the popular twice elected white mayor of this city — agrees and says, the divisions notwithstanding, residents are united by their affection for the Big Easy:

“If you go see people in New Orleans, they will complain like anybody else in the world — complain about what it is that we tend to complain about every day. But if you ask them whether they love New Orleans they’ll tell you it’s ‘the greatest city in the world.’ They’ll say it’s better than Boston.”

And in the French Quarter, Conrad, while lamenting the city’s inequities, says “it is indeed the greatest city in the world."

“And you come here and you feel good. And it’s good to wake up in the morning and say ‘hey man, how you doing’? You don’t get that everywhere. This is one of the few places where somebody will actually say, ‘man, how you doing this morning.’"

Conrad says that is the New Orleans he’s always known, and he hopes a place where people say ‘how you doing this morning’ will not be replaced by the silence of strangers arriving to this rapidly gentrifying urban landscape.