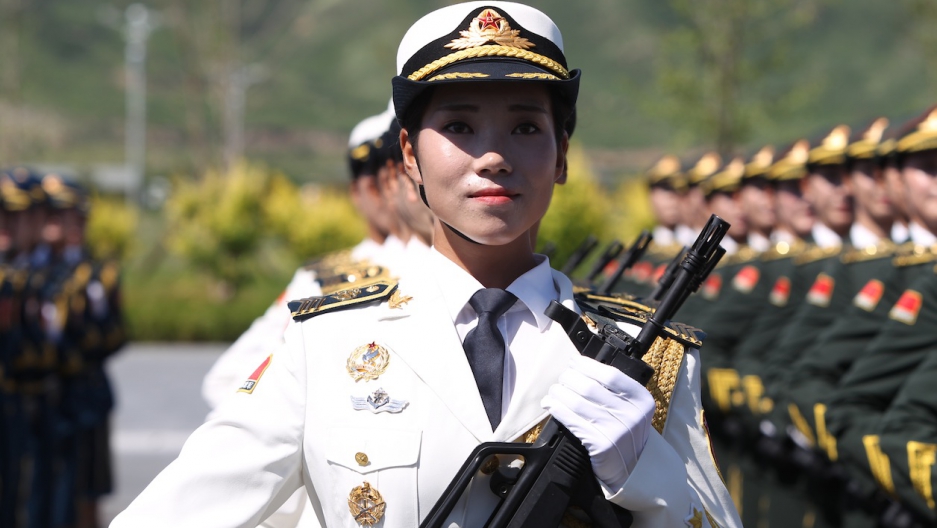 A female soldier from the People's Liberation Army gets ready for a real laugh-riot of fun.
Credit: ChinaFotoPress
Share

BEIJING, China — There may be storm clouds scudding over Beijing this week — but not for long. On Thursday, the capital will effectively shut down for several hours as China’s leaders, along with a smattering of foreign heads of state, observe a tightly orchestrated military parade along the normally traffic-choked streets.

The Cold War-style display of firepower, ostensibly aimed at commemorating the 70th anniversary of Japan’s surrender in World War II, comes at a time of particular anxiety for China’s leaders, who face growing concerns over fizzled economic reforms, a sliding stock market, and the fumbled handling of a disastrous chemical explosion near the prosperous city of Tianjin.

As they put on a brave face for the audience at home, Chinese authorities will not be letting a little bad weather rain on their parade. The civilian populations, though, have little chance of escaping their homes to glimpse any goose-stepping troops or war planes overhead: the entire route, a five-square-mile block of the city center, is off-limits for ordinary citizens of the People’s Republic. Onlookers take photographs near an area in Beijing's Tiananmen Square where access has been blocked to the public on Sept. 1, 2015.

Temporary measures designed to dispel pollution and restore a rare azure complexion to the gray skies are familiar to Beijingers, who coined the term “APEC blue” to describe the fleeting pleasure of clean skies that heralds the arrival of overseas dignitaries. Shutting down factories and restricting traffic are just part of a tightening noose of restrictions, designed to ensure nothing goes off-script, while mildly infuriating residents.

More from GlobalPost: How bad is the Chinese economy right now? That's a good question

Homeowners in Badaling whose houses overlook the troops entering Beijing have allegedly promised not to gawk, take pictures, interfere with military vehicles or “use balloons.” Meanwhile, the Tiananmen branch of Yonghe King, a Chinese fast-food outlet near the parade’s epicenter, has been requesting all customers register their names, ID and cellphone number.

Residents are used to even the more unusual measures that China’s paranoid officials deploy to assure higher-ups their bureaucracy is attuned to all possible threats.

Policemen check the identity and bags of people around Tiananmen Square.

Critics have been quick to note a distinctly fascist quality to the lead-up for an event in honor of anti-fascism.

This year, pigeons won’t even get close to the festivities: a bestiary of falcons, hawks, hounds and macaque monkeys have been dispatched to clear the skies of any avian menace. According to state media, the birds were not killed but given the “choice” to settle elsewhere.

More from GlobalPost: China is hell-bent on having clear skies for its military parade

Other, more down-to-earth precautions applied citywide include registering one’s ID to use the mail, the closure of gas stations, parks and museums, and rigorous subway checks: Passengers now report being forced to sip from any bottles to prove the liquids inside are safe. Popular TV shows are banned from broadcasting for five days. Sales of drones, gliders, and model planes are strictly verboten. (A recent list of the restrictions can be found here).

Critics have been quick to note a distinctly fascist quality to the lead-up for an event in honor of anti-fascism: these include restrictions on visitors entering Beijing (with long-distance buses from Xinjiang ordered to report any ethnic Uighur passengers) and the arrest — followed quickly by a confession — of a financial journalist for Caijing who reported on futures trading and a final stifling of the liberal Nanfang Group, once the most highly regarded newspaper organization on the mainland. Chinese military guards secure shops in Tiananmen Square on Sept. 1, 2015, prior to a Sept. 3 military parade to mark victory over Japan and the end of World War II.

A prisoner amnesty for certain war veterans, juveniles and senior jailbirds will not apply to the hundreds of journalists, lawyers and critics locked up in the broadening crackdown on civil society that President Xi has overseen.

In fact many, looking to take advantage of a weakening yen, have booked tickets to Japan to escape the tedious rigmarole of a populist event directed at shoring up nationalist sentiment. It’s an irony that Beijing’s bureaucrats, nervously eyeing domestic consumption for signs of waning confidence, will have little time to appreciate.