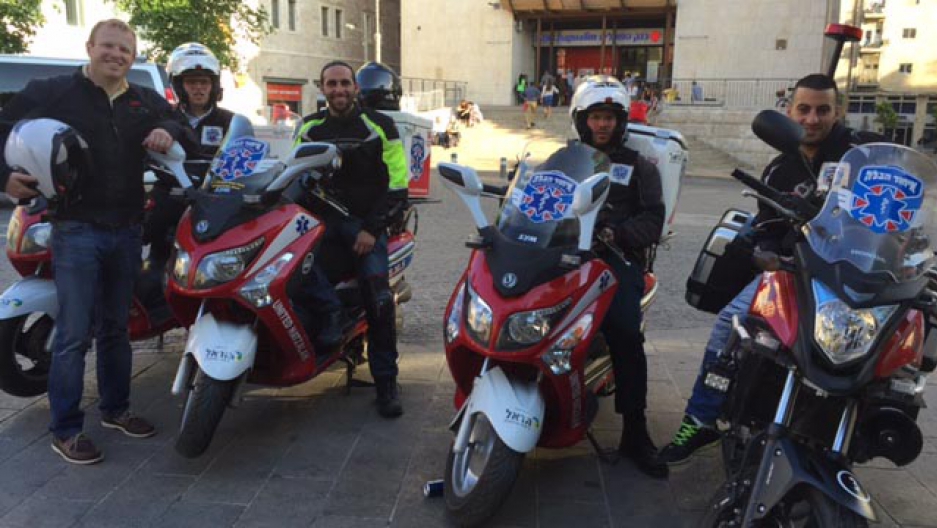 A member of United Rescue and Jersey City Medical Center, Paul Sosman, in Israel learning from members of United Hatzalah.

Jersey City is just across the water from lower Manhattan and the Statue of Liberty. About 40 percent of the town’s residents were born outside the United States, and more than half the city speaks a language other than English at home, according to the most recent census data. So, it’s perhaps no surprise that Jersey City is embracing a style of emergency medical services that, until now, has only existed abroad.

It’s staffed by community volunteers, and it’s based on an Israeli system, called United Hatzalah.

Jersey City already boasts one of the lowest urban 911 response times in the US. It takes less than six minutes, on average, for an ambulance to get where it is needed. Nine minutes is more typical.

Recently, a paramedic team responded to a patient reporting a heart attack in about four minutes. But that's not good enough. The city and its hospital have set an aggressive goal of responding to emergency calls in less than two minutes. That’s unheard of in this country, but not in Israel, where GPS software deploys two response teams at once: an ambulance, plus people nearby who can help until it arrives.

Mark Gerson co-founded the US version of this program, which is called United Rescue. "The difference between arriving in 90 seconds and five minutes is very often the difference between life and death," says Gerson. "The goal of United Rescue is to crowd source emergency first response, to enable those who are trained and equipped to save lives to do so, and to be immediately followed by the ambulance."

Community volunteers undergo 60 hours of medical training and agree to be tracked by GPS software. Jersey City Medical Center is leading the charge. Director of Emergency Medical Services Robert Luckritz says, "Not only do we have to account for how long it takes the ambulance to get to the home, but also how long does it take to get on an elevator and get to the 42nd or the 52nd, or now we have a 95-story building being built in Jersey City. So, if there's someone on the 41st floor trained in CPR and emergency care, and there's an emergency on the 35th floor, we want to make sure that we can get them there quickly, because it can take time for us to get up into some of these high-rise buildings."

So far, the hospital is training about 300 volunteers. It also provides gear, such as oxygen, defibrillators and other first aid supplies. New Jersey has Good Samaritan laws to protect the volunteers who help out, but what about protection for those who call 911 and find someone who doesn’t work for a hospital at their door? Luckritz says they’re taking that just as seriously.

"We're putting them through all of the same process that any one of our employees go through," he says. "We're performing a thorough background check. We're vetting these individuals, going through an interview process, to make sure that they truly are the type of individual we would want to walk into our homes."

The software the hospital is using to deploy community responders was created for Israel, but it’s also being used in Brazil, Australia and the UK. Jersey City Mayor Steven Fulop says it’s pretty simple. "It is similar to what one would think with Uber or Google Maps. Simultaneously it will route out an ambulance and it will notify a United Rescue volunteer that the system recognizes is in the immediate vicinity," he says.

Given the many cultural and legal differences between Israel and the United States, it raises the question whether a program like this might end in lawsuits. Lee Goldsmith, a medical doctor and an attorney specializing in medical malpractice, believes there's a reason why restaurants have signs posted about how to perform the Heimlich Maneuver, and that's because it saves lives.

"You cut the response time. Lives will be saved," he says. "This should be done all over the place and I do not foresee any increase in litigation anywhere in the United States."