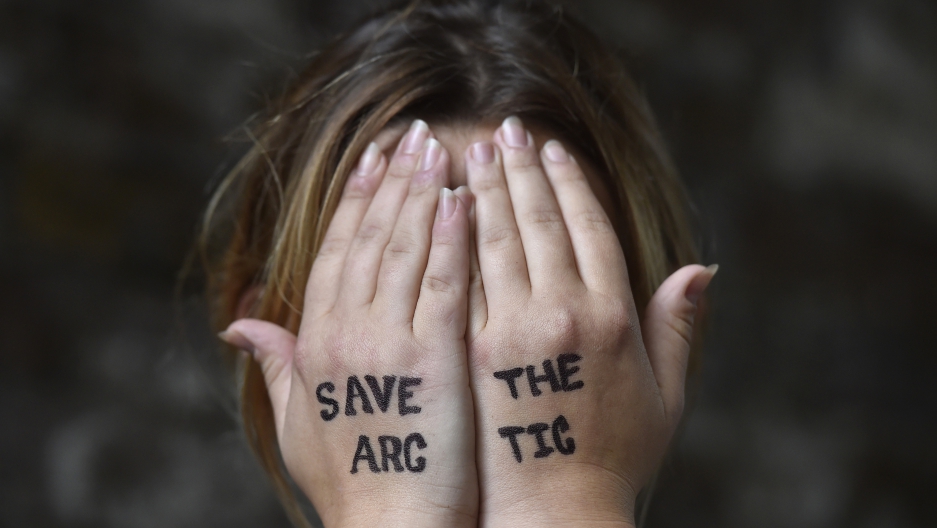 British singer Charlotte Church holds her hands to her face during an environmental protest near the offices of Shell in central London, Britain August 26, 2015.

If you're looking for President Barack Obama this week, leave a message. He'll be in the Arctic. Today, Obama embarked on a three-day tour of Alaska where he'll venture north of the Arctic Circle — a first for a sitting president. His focus will be on how a warmer climate is changing the Arctic. The president will be attending an international conference on the subject.

Melting ice is increasingly opening up the region to activities like shipping and oil drilling. But the US lags behind other nations, like Russia, in pressing its claims on the Arctic.

Anchorage-based reporter Elizabeth Arnold recently had the chance to hop aboard a Russian icebreaker in the Chukchi Sea, a body of water between Alaska and Siberia. She says she immediately noticed something. "There are definitely more vessels transiting this area than you would think," she says. "And that's largely because there's less ice."

Most of those vessels are not operated by the US. We have only two icebreakers compared to Russia's 41. A lot of Arctic countries have been hot on the place for years while the US has taken a back seat. Arnold says the US didn't really even attend conferences about the Arctic for the last 13 years, even though we are an Arctic nation. "In terms of territory, we can't submit claims because we haven't signed the 'Law of the Sea,'" she says.

The "Law of the Sea" is a United Nations treaty adopted in 1982. It aimed at setting guidelines and rules regarding the oceans, including the Arctic. But it still hasn't been ratified by the Senate after all these years. Arnold says that's due to lawmakers being leery of approving any UN treaty. But that's allowed other countries to aggressively pursue and claim land.

Arnold says the Arctic is going through a rapid change.

One stop on President Obama's tour of Alaska is the city of Dillingham, where he's expected to spend time seeing how climate change is affecting this coastal community. Obama will engage directly with the residents and one subject likely to come up is the effects climate change has had on their shoreline.

Erosion is happening all along the coast of Dillingham, says City Councilman Paul Liedberg. While there are no accurate numbers, he says, "all one has to do is to travel down the beach ...  and you can see the constant erosion taking place. That erosion is coming from water — ice, wind, ground water — that seeps out through the bluffs and with projections for more storms and higher sea levels related to climate change" the conditions are likely to worsen.

Dillingham is 300 miles southwest of Anchorage. The city is along the coast but inland are mountains that stretch up to 5,000 feet — which feed the rivers that form crucial salmon breeding habitat.

And those salmon breeding areas are especially important to Liedberg.

"Salmon needs two area to survive. They need the rivers and streams where they hatch their eggs and are reared for a period of time.  And they need the oceans where they are maturing and growing ... and warmer temperatures in the oceans will affect both of those and it's of critical concern to the region."

Liedberg says he want Obama to "wave a magic wand and ensure conditions remain in place to support the habitat that we have and the salmon runs."