This buffalo in the village of Kaskikot, Nepal, survived last April's magnitude 7.8 earthquake, but an estimated 55,000 farm animals and nearly half a million domesticated birds did not. The losses were deeply felt in a place where livestock are often thought of a members of the family.

When a buffalo is born in the Nepali village of Kaskikot, it’s treated a lot like a human birth. Today Aamaa, whom I live with, and I are cooking a special meal in honor of baby O’Neil, a buffalo who was born last week. We’re making rice pudding.

People and animals nurture tender relationships here in Nepal. The earthquake that took nearly 9,000 human lives earlier this year also claimed an estimated 55,000 farm animals and nearly half a million birds, and the effects of these losses have been felt by both people and animals. Especially in villages like Tripureswor, 100 miles east of Aamaa’s house, where nearly every single one of the 947 houses were destroyed.

Tripureswor resident Binda Thapa has a photo of her house after the earthquake — a pile of rocks with two pieces of tin roofing strewn over it. She says her buffalo was pinned down under its collapsed shed for hours, and was jittery for weeks afterwards. For a while it didn’t even provide milk predictably. Maybe, she thinks, out of fear or shock. 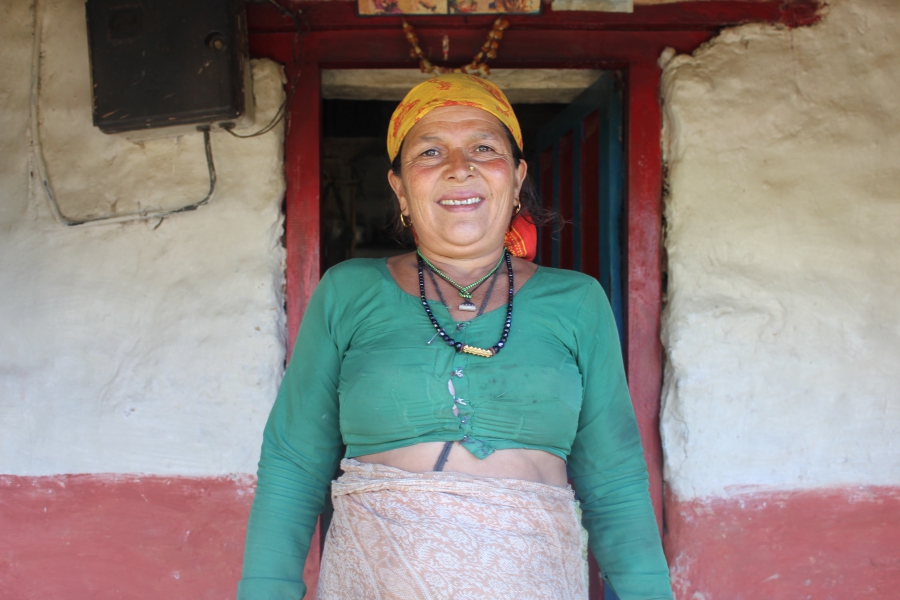 Producer Laura Spero has lived with this woman — whom she calls Aamaa —in the Nepali village of Kaskikot for much of the past 12 years.

Farm animals play a vital role in the lives of rural Nepalis. Buffalo are raised for milk, and their waste is used for fertilizer and mixed in to the mud in traditional stone houses. Goats are sold for meat, oxen plough and chickens provide eggs. People like Aamaa and Binda spend most of their day caring for their livestock, beginning with milking in the morning, then cutting grass for feed and carrying it home in heavy loads each afternoon.

From the outside, it’s easy to reduce livestock to economics, and that’s certainly one aspect of their existence. But they’re also members of the family.

You have to love the animals you raise more than your children or parents, Aamaa tells me. It’s a lot of work — cutting grass for it, cooking for it, cleaning the dung out of the shed multiple times a day. The reward for providing that love is that we humans get to eat.

And it’s not just humans who suffer when their animals are harmed. The reverse is also true. Livestock often have one primary caretaker, like Binda, who reenacted for me the loving conversation that she has with her animals each day as she’s coming back from the fields.

They’ll hear her, she says, and respond, “My human is coming!” “Maybe they’re saying, ‘My mother is coming! Give me something to eat!’” Binda says. So she’ll coo at them, she’ll toss some grass to them and say, “Hey guys, are you little ones doing good?” And they say “baaa,” “meh meh,” “moooo…”

What this all means is that, for animals whose people were killed in the earthquake, it’s like losing a parent. And that feeling goes both ways.

Anyway, you look at it, says Nabin Thapa, who lost three goats and a baby buffalo in Tripureswor, these animals are like our mothers. “We drink their milk and get stronger,” he says. “Even the old people among us are like babies to them.”

He shrugs and adds, “Nobody’s even asked how many animals we’ve lost until now. I’m glad you’re asking.”

As villages like Tripureswor rebuild, people and animals alike are left to contend with their mutual losses. Meanwhile, back in Kaskikot, Aamaa and I are preparing an important ritual: the celebration a new life.

Since baby O’Neil’s was born 11 days ago, we haven’t mixed her mother’s sacred milk in to any of our other food. On the 11th day, we held a ceremony to name the baby, just like we would for a human. Today we can inaugurate its milk in to our daily meal. In to the rice pudding it goes.

Aamaa leans back against the clay wall of the kitchen. “These souls we’re raising,” she says, “are souls just like our own.”

This pot of rice pudding marks an important moment in the life of Aamaa's household — the first use of her buffalo's milk 11 days after the birth of a new calf. Maintaining rituals like this are a vital part of restoring normal life after April's deadly earthquake.