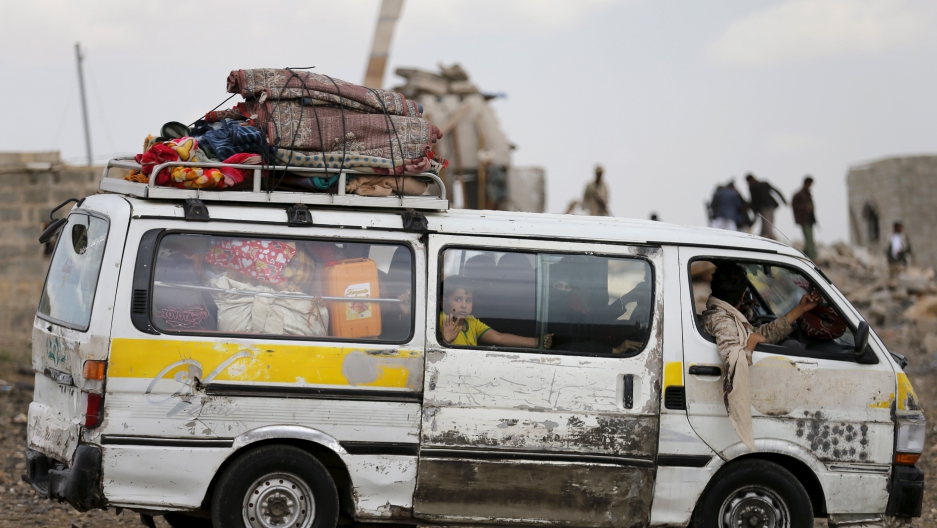 People ride a van as they flee their house near the site of a Saudi-led air strike in Yemen's capital Sanaa August 26, 2015.

My father-in-law asked, "When was the last time Yemen had a government?"  I kept coming up with incomplete answers:

Yemeni president Abd-Rabbu Mansour Hadi is in exile in Riyadh. His government has Saudi backing and recognition from the US and Britain, among others. But his rule is dependent on foreign fighters and the massive armories of the Saudis and the UAE.  When he was elected president in 2012 he was the only candidate. Sorry, Dad, Hadi's government doesn't have wide support.

The Houthi leadership, with guidance and support from the former Yemeni president Saleh, has control of the Yemeni capital and several other key cities, and it has no intention of giving that up without a fight. But few argue that it's a real government that conducts statecraft, builds roads and schools, provides water or hauls trash. No, Dad, that's not it either.

3. It had one for three decades.

From 1978 President Ali Abdullah Saleh controlled the capital and the nation's military, signed treaties, and welcomed ambassadors from many countries. But he had weak support in the nation's north, where he was fighting off the Houthis, and in southern Yemen, where separatists longed to restore an independent state of South Yemen. And al Qaeda was sprouting in the southeast, some say with his tacit approval. No, Dad, Saleh's government wasn't universal, and in fact it was brought down by a popular uprising.

The Zaydi royal Imam Yahya, and later his son, controlled much of northern Yemen after World War I, but he was constantly involved in turf battles with neighbors such as Ibn Saud (the founder of Saudi Arabia) in the north and the British who had loose colonial rule of the south.

5. Some went on for centuries.

"The Ottomans? They ruled the region for centuries, but never had complete control of Yemen's mountainous region. The Rassulids? The Sulayhids?" I'm scrolling through Wikipedia now and my father-in-law is getting bored.

"How about the Queen of Sheba?" She ruled Saba in the eleventh century BC!

That gets his attention. But it's ancient history.

I just can't find a reference to Yemen ever being one big unified country. And as groups of Yemenis with different interests coalesce around the drive to defeat the Houthis, I see a fractured future for Yemen.  I tell my father-in-law about the UN-led National Dialogue that had many people, including President Obama, look upon Yemen as a post-Arab Spring success story.  But the Dialogue ended without buy-in from all parties. And you can see what's happened since.

I dread the threatened land invasion of Yemen's Houthi-controlled capital, Sanaa. I have friends who live there. And I fear that their city will be destroyed and left to bandits and zealots as was Aden, the first Yemeni city to be captured by the Saudi-led coalition.

"When was the last time Yemen had a government?" I don't know, Dad. But I don't think there's going to be one anytime soon.