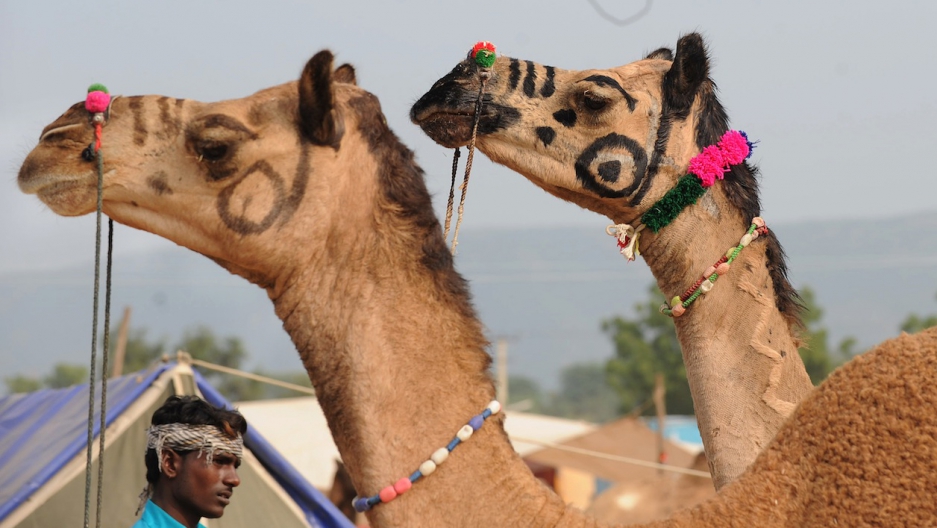 NEW DELHI, India — In a shaky video clip, a camel bellows in protest as a crane lifts it into a waiting panel truck bound for an underground slaughterhouse. In others, camels thrash with their throats slit, which ensures their flesh remains halal.

It's not pretty. But the trade in camel meat has surprising advocates in the western desert state of Rajasthan—where the export and slaughter of camels was banned this March.

For centuries, the Raika, a caste of camel breeders, have worshipped the hardy animal the way most Hindus revere the cow. But with the demise of the royal camel herds kept by the state's once-plentiful rajas and maharajas, followed by the replacement of camel carts with cheap cars and trucks, the few camel breeders that remain in Rajasthan worry that outlawing camel slaughter will ensure they disappear altogether.

"Nobody is buying camels, so nobody is keeping camels."

That's because unlike wild animals, the continued survival of domesticated livestock depends on their profitability, argues Hanwant Singh Rathore, who runs a nonprofit called Lokhit Pashu Palak Sansthan, or "Welfare Organization for Livestock Keepers," that works closely with the Raika.

“Nobody is buying camels, so nobody is keeping camels,” Rathore said.

“If you're a young camel breeder, you can't find a wife, because you don't have any income.”

The Raika aren't the most surprising advocate of legalizing camel slaughter, however. That title belongs to the co-founder of LPPS, German veterinarian-turned-anthropologist Ilse Köhler-Rollefson. A tall, athletic-looking woman with wild, curly hair, Köhler-Rollefson came to India 25 years ago when unrest in Sudan forced her to abandon a research project involving the Bedouin.

At that time, India had the world's third-largest population of wild and domesticated camels, so it seemed a natural choice. But soon after she arrived, the anthropologist learned that India's main camel herders, a desert-dwelling caste called the Raika, were unlike the Bedouin or any other camel-based society she'd ever encountered. Moreover, their cultural taboos were rapidly causing the animal from which they'd always derived their identity to disappear.

Unlike the camel breeders of Africa and the Middle East, the Raika traditionally did not believe in slaughtering camels for meat, and historically only sold them for use as riding or draft animals. They thought selling camel's milk brought with it a plague of misfortunes ranging from drought to disease—even new grazing fees issued by the forest department. They consumed camel's milk themselves, of course. But the only real income they earned from them came from selling them at the huge annual livestock fair in Pushkar, where prices had plunged due to the growing affordability of trucks and tractors that replaced camels as a means of transport.

"There is a moral and an ethical question whether camels should pay the price."

Since her first introduction to the Raika, the anthropologist has gone native. She's bought a camel. She's founded a non-profit trust for pastoralists. She's pioneered a milk-selling cooperative. She's led teams of bards and shepherds to Germany and Africa for international conferences, and she's undertaken a 500 mile camel trek across the state known as “the land of kings” to draw attention to the rapid decline in the camel population, which plunged from more than a million to fewer than 200,000 over the past 20 years.

Gradually, she and Rathore—who started out as her driver and made himself indispensable—have succeeded in convincing many Raika to break their cultural taboos, though they still don't like to talk about camel slaughter. But their dogged advocacy backfired earlier this year when their long campaign to get the camel declared Rajasthan's state animal finally bore fruit.

Instead of releasing grazing land controlled by the state forest department or encouraging camel's milk products, the government simply named the camel a protected animal, barring export and slaughter of the animals for meat.

“We were initially very happy, because we thought there would be all kinds of support for camel breeders,” Köhler-Rollefson said. “But exactly the opposite happened.”

"If you have 10-15 male camels, they're fighting and killing each other."

Pressured by a signature campaign that attracted tens of thousands of animal rights activists, the government opted to apply the same approach to protecting the camel that Rajasthan and other states have used to protect cows—a subject that draws more pressure from Hindu groups. But anecdotal evidence already suggests that has been counterproductive, because it makes raising livestock unprofitable. Half of the animals born are males, which cannot be sold for as much as the cost to raise, since there is no legal market for their meat.

“If you have 150 female camels, you only need one male camel,” said Rathore, who points out that Rajasthan’s recent law also bans castration.

“If you have 10-15 male camels, they're fighting and killing each other."

Calling any potential move to normalize camel slaughter “a cop out,” Arpan Sharma, a spokesman for the Federation of Indian Animal Protection Organisations (FIAPO), says Indian state governments should instead look for other ways to support breeders like the Raika.

“All of us have more than a full empathy with the plight of many such [people],” Sharma said. “But there is a moral and an ethical question, whether camels should pay the price.”

The unlikely team, along with a group of die-hard Raika breeders, are fighting a rearguard action to save the state's camels and the Raika culture through the sale of products made with camel's wool and camel's milk. But even though a growing, if unproven, belief that nutrients in camel's milk can be beneficial to autistic children has driven Indian parents to go so far as to fly from Mumbai to Rajasthan on literal “milk runs,” Köhler-Rollefson fears there may not be any camels left by the time a viable mass market develops.

Currently, Rajasthan's milk cooperatives don't officially accept camel's milk—though they do so on the sly in times of shortage—and prices based on fat content prevent that from being a very profitable outlet.

News that the multi-billion dollar, Gujarat-based dairy cooperative Amul aims to add camel's milk to its product mix by the end of the year is more encouraging. But Köhler-Rollefson is skeptical that the initiative can succeed in Gujarat, due to its low number of camel breeders, and the issue of fat content.

That's why, to keep the herds alive, she and her Raika associates want Rajasthan to roll back the ban to allow the trade in male camels, as ugly as it may look on YouTube.