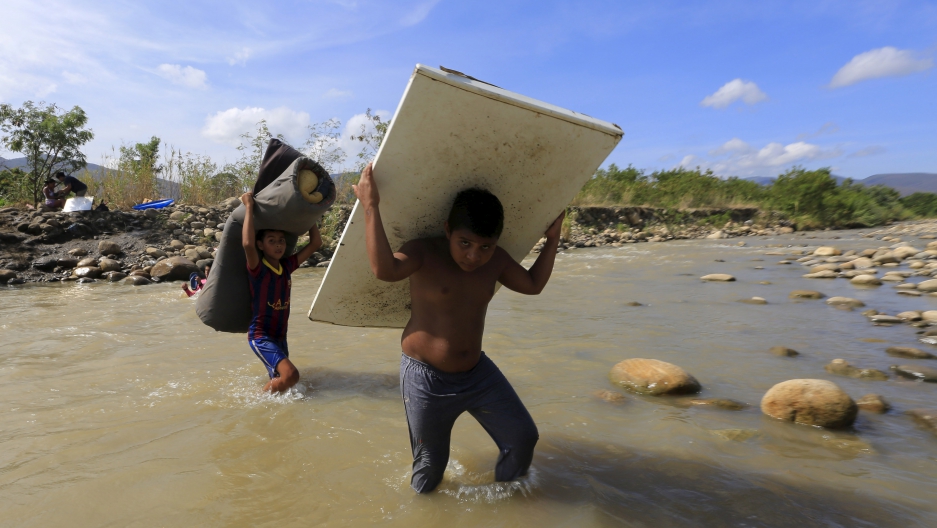 Boys carry their belongings as they cross the Tachira river border into Colombia from Venezuela, near Colombia's Villa del Rosario village, August 27, 2015.

Leading Republican presidential hopeful Donald Trump has suggested the US deport all of the country’s 11 million undocumented immigrants, but hasn’t gone into much detail about how he would propose carrying out such a massive undertaking.

It’s hard to imagine what it would look like — would there be, as journalist and recent Trump foil Jorge Ramos suggested in a op-ed, soldiers, police and  Immigration and Customs Enforcement officers, “raiding homes, workplaces and schools,” in “brutal raids” across an imaged "Trump-land," or would President Trump find another way to carry out his strategy?

This week, a glimpse of what a mass deportation could look like came from an unexpected source: Venezuela, where President Nicholas Maduro ordered that Colombians living in border towns be deported. Maduro alleges that they are responsible for cross-border smuggling and joining para military gangs. Critics quickly seized on the similarities between Maduro’s policy and Trump’s approach, with one Twitter using saying the only difference between the two was the color of their hair.

Fusion’s Latin America correspondent, Manuel Rueda, was at the border as the deportations occurred and covered the story. He sent us the following photo essay documenting what he saw.

Venezuela has deported more than 1,100 Colombian immigrants since Friday as diplomatic tensions rise between both countries. The unexpected move created a humanitarian crisis along one of South America’s busiest border crossings. 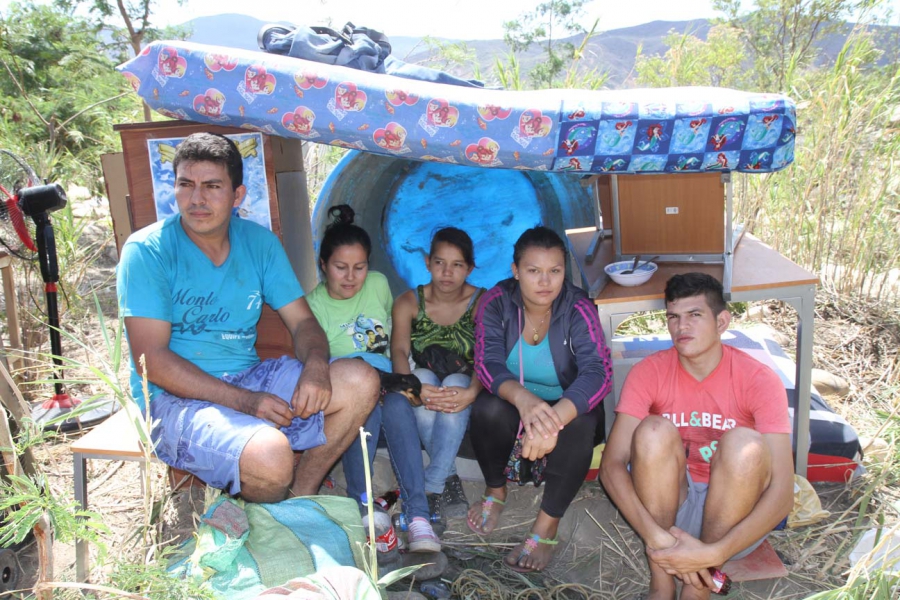 A Colombian family near the border with Venezuela.

Most Colombian deportees had been living in shanty towns located just across the border, where they lived illegally. Deportees said that they were expelled abruptly by Venezuelan National Guardsmen who searched for immigrants home by home, and rounded them up, without giving them a chance to explain why they were in the country, or even an opportunity to pack their things.

In the following days some immigrants made desperate efforts to return to Venezuela to rescue their belongings. From Saturday to Tuesday, dozens of people crossed the Tachira river, which separates the two countries, bringing back TV's, furniture, refrigerators, mattresses and even water toilets. 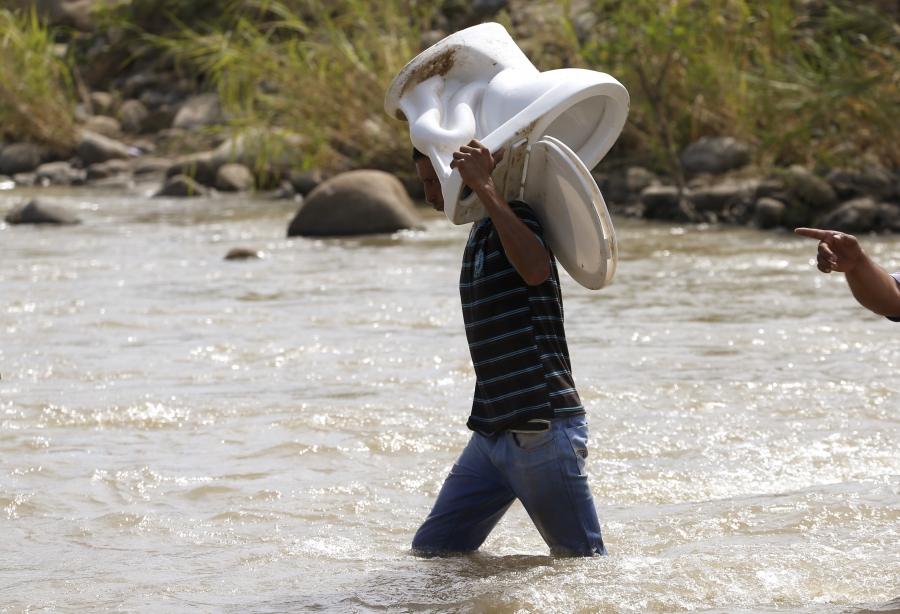 A man carries a toilet as he crosses the Tachira river border into Colombia from Venezuela, near Colombia's Villa del Rosario village. 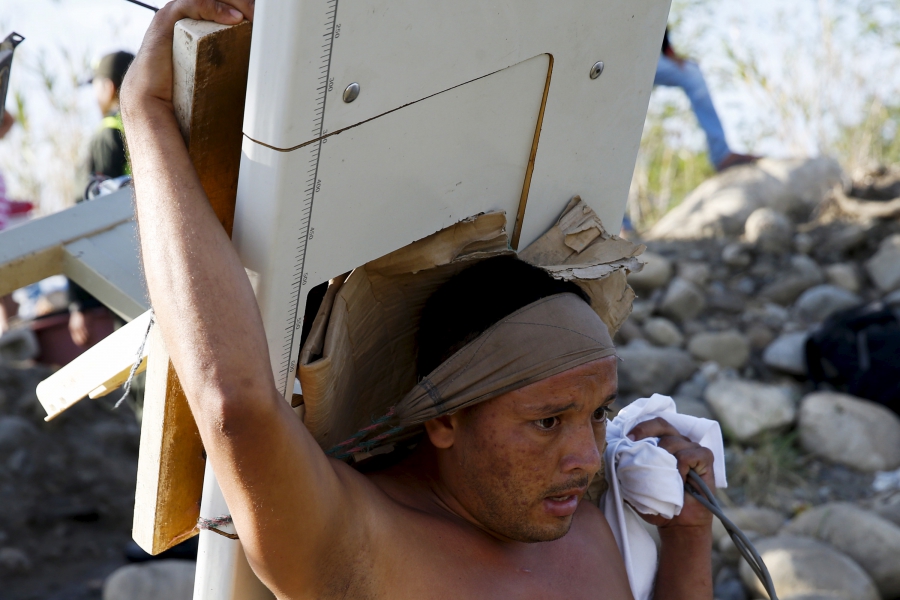 A man carries his household items to cross them to Colombia through the Tachira River at San Antonio in Tachira state, Venezuela.

Many deportees didn't have a place to go, so they are left their belongings on the Colombian side of the river while they find a new home. 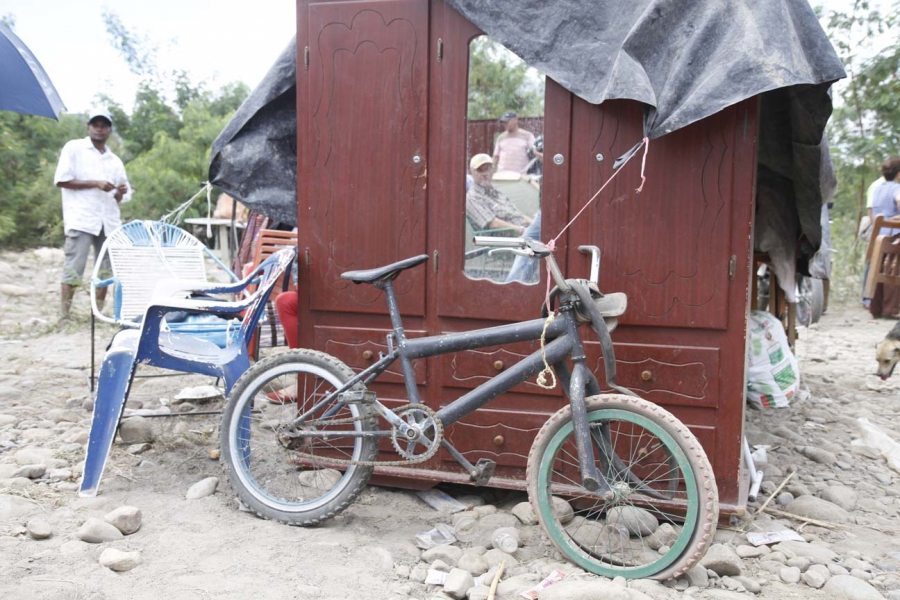 A Colombian family left their belongings by the Tachira river.

Kety Vuelbas and her husband Euclides said that they have been sleeping next to their things for two nights to ward off thieves. 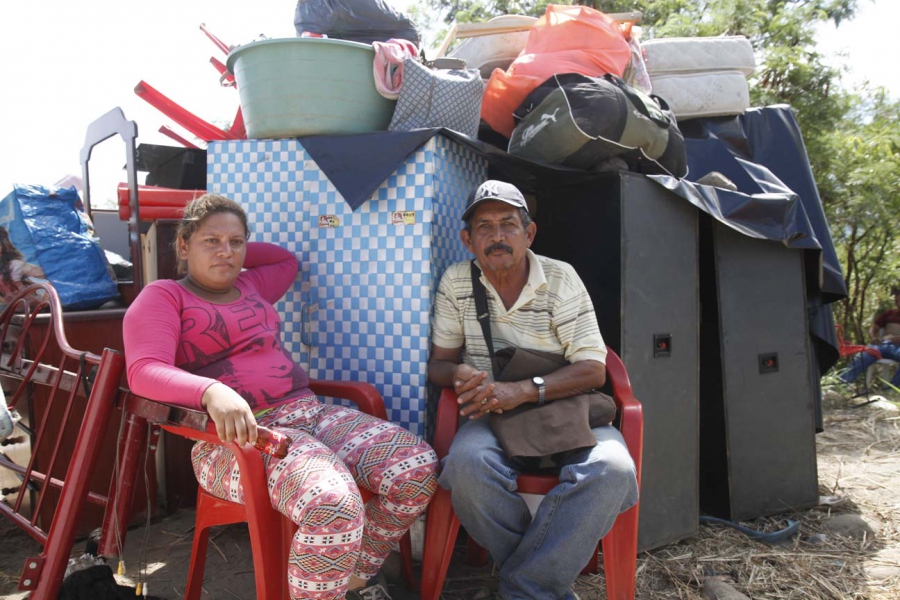 Kety Vuelbas and her husband Euclides slept next to their belongs on the Colombian side of the river have being deported from Venezuela.

Yesenia Perez and her four kids also setup camp next to their belongings. Perez used one of her mattresses as a makeshift roof. 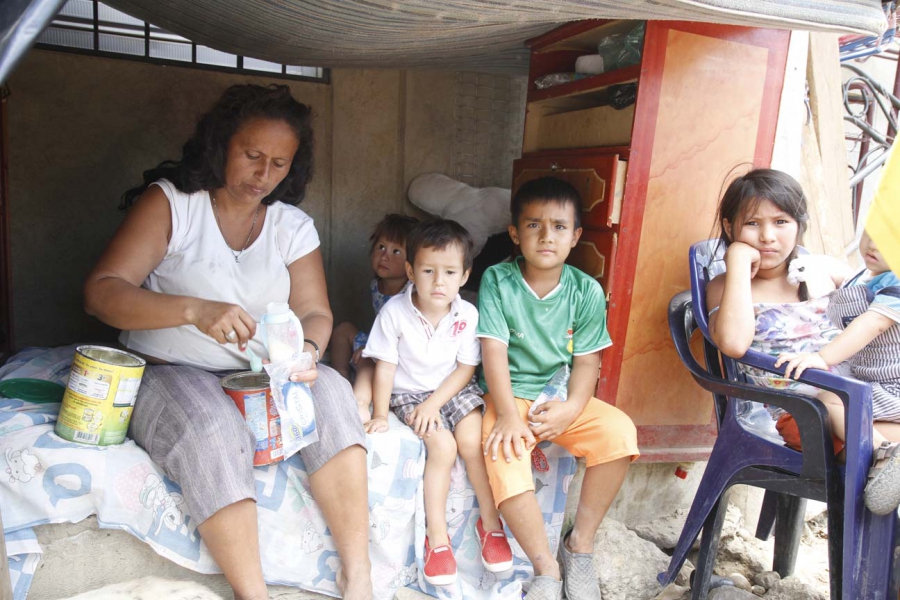 Yesenia Perez and her four children made a makeshift shelter with their belongings, with a mattress as roof, after being deported from Venezuela.

Venezuelan president Nicolas Maduro said that he expelled Colombians who were living along the border because they were responsible for smuggling subsidized goods across the border and joining right wing paramilitary groups that extort local businesses.

But deportees tell another story.

Jose Ayala said he had been working in Venezuela as a cook. "I burnt my hands for the past 12 years... and now we have been kicked out like dogs," he said. 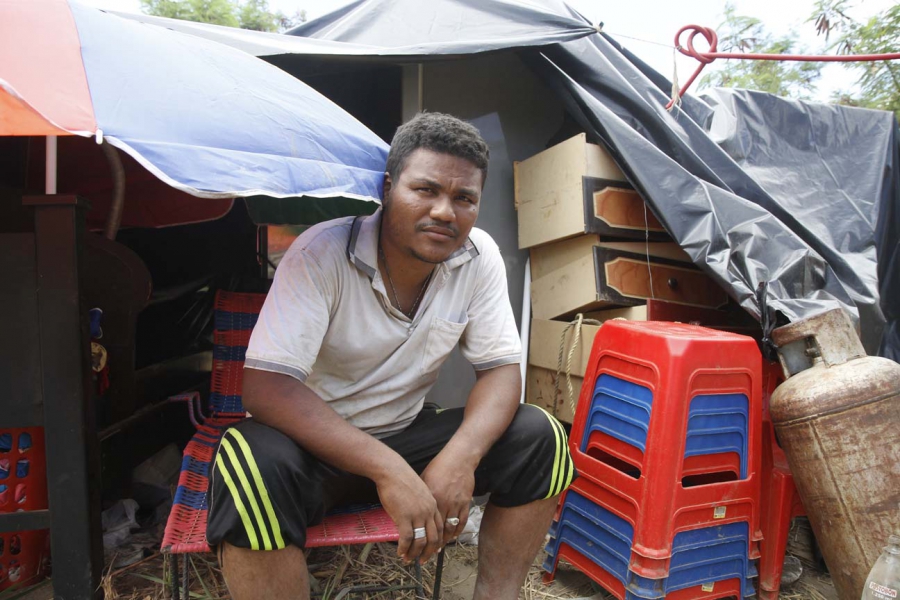 Colombian Jose Ayala worked as a cook in Venezuela before he was deported.

Mari Rey and Eduardo Niño said they moved to Venezuela because many services, like electricity, were cheaper than in Colombia. 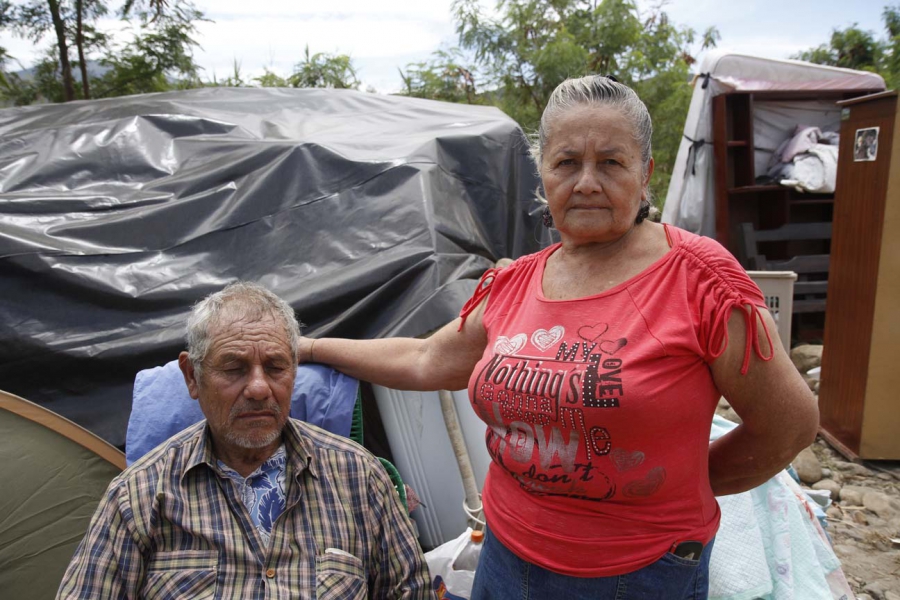 Mari Rey and Eduardo Niño moved to Venezuela to take advantage of cheaper services, but were deported this week.

Niño said that when he tried to go back to Venezuela to get his things, National Guardsmen beat him and tied him up for six hours. 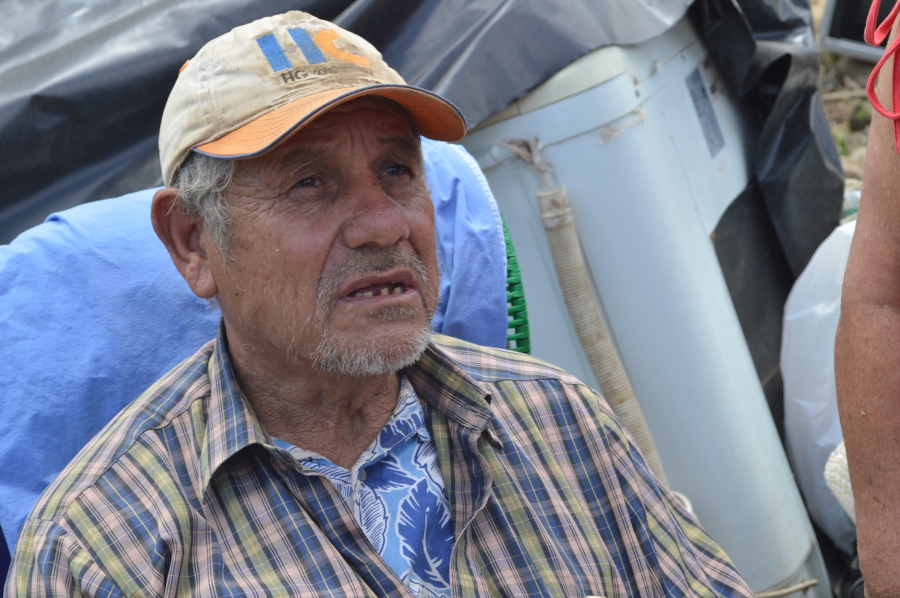 Eduardo Niño said Venezuelan national guardsman beat him and tied him up for six hours when he tried to cross the border again to get his belongs after he was deported.

The Venezuelan National guard demolished some of the homes were Colombians used to live. Homes slated for demolition were marked with a "D."

The home of a Colombian immigrant marked for demolition in Venezuela.

Venezuelan soldiers patrolled the border on Wednesday to prevent anyone from crossing the river to get more things. 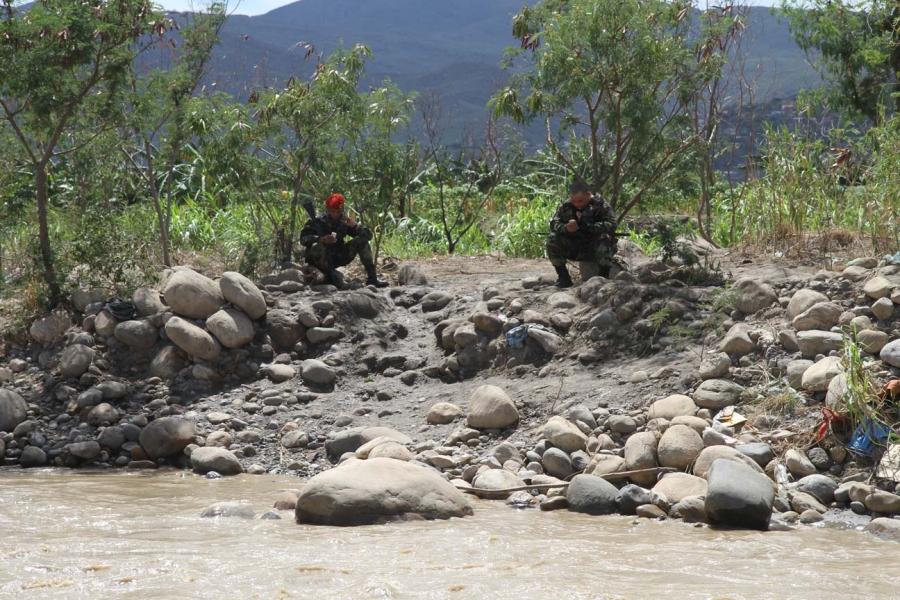 On Wednesday, Venezuelan officials said that Colombian deportees would be able to enter the country once again to get their remaining belongings. The deported immigrants are hoping that the Venezuelan government will keep its word, but tensions are high between the two countries. Colombia recalled its ambassador to Venezuela on Thursday, and Venezuela quickly did the same. Meanwhile, many businesses have closed on the Venezuelan side of the border their Colombian employees can’t get to work, according to a report by the Associated Press. 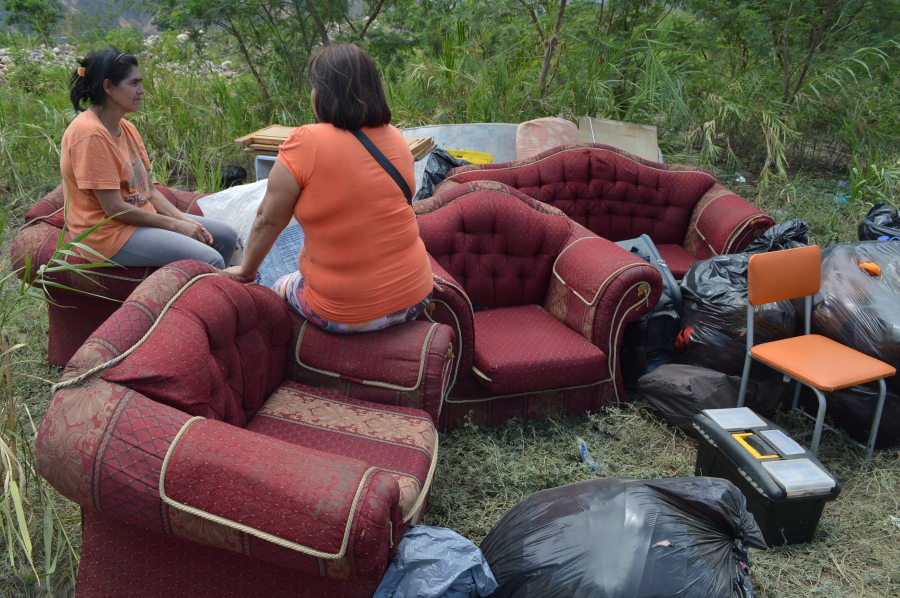