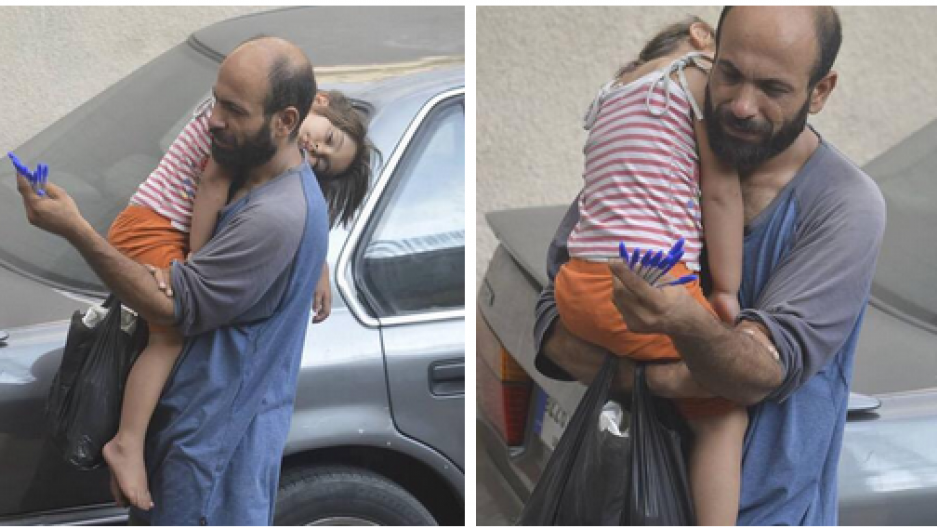 Abdul, a single father from Syria, and his four-year-old Reem, selling pens at the side of the road in Beirut.
Share

BEIRUT, Lebanon — It is an image that sums up the desperation of millions of Syrian refugees living throughout the region: a man selling a handful of pens by the side of the road in Beirut, Lebanon, with his exhausted daughter hanging over his shoulder.

The picture of Abdul Haleem al-Kader, a single father, and his four-year-old Reem, was posted on social media by Icelandic activist Gissur Simonarson and shared tens of thousands of times with the hashtag #buypens.

He was inundated with offers of donations for social media users, so decided to launch a crowdfunding page to raise money to help Abdul start a new life for his daughter and nine-year-old son Abdelillah.

Gotten a lot of requests to help this man and his daughter. Anyone know people in Beirut able to locate him? #BuyPens pic.twitter.com/KOz4mjW1rd

Within 30 minutes his goal of $5,000 was raised and at the time of writing, donations had reached more than $70,000. Simonarson said he is working with Unicef's special protection unit to help get the family to a safe location.

Writing on Twitter, he said: "I'm also considering setting up some kind of fund that would give him payouts monthly, so he doesn't end up with a bag of money, and not know what to do with it."

Finally found him =) Been a lot of work, but it was worth it! Now lets help them! https://t.co/Fcg59KTbbh pic.twitter.com/SjIDmytCeG

Abdul, a Palestinian-Syrian, is seeking refuge from the civil war in Lebanon. He had fled besieged Yarmouk — an unofficial Palestinian refugee camp in the suburbs of Damascus — an area of Syria that has been cut off from food and water for months at a time. Hundreds from the camp have died from starvation and thirst as the regime and rebels fight for control.

Abdul told BuzzFeed News that he left Syria four years ago for Egypt with his wife and two kids. When his wife wanted to go back to Syria, he refused, and so she returned without him and the children.

"I was surprised to know that people abroad heard about my story and care about my kids,” he told BuzzFeed. “I couldn’t hold my tears. I kept saying, ‘Thank god, thank god,’ and hugging my kids.”

More from GlobalPost: Syrian refugees in Lebanon would rather face bombs at home than ensure the harsh winter

Four years of civil war across the border in Syria has caused millions to flee their homes in search of safety. The influx into neighboring Lebanon has left the small country struggling to deal with the crisis: 20 percent of its population is now made up of refugees. Many live in extreme poverty and face hostility and resentment in the fragile state.

To donate to Abdul and his children click here.