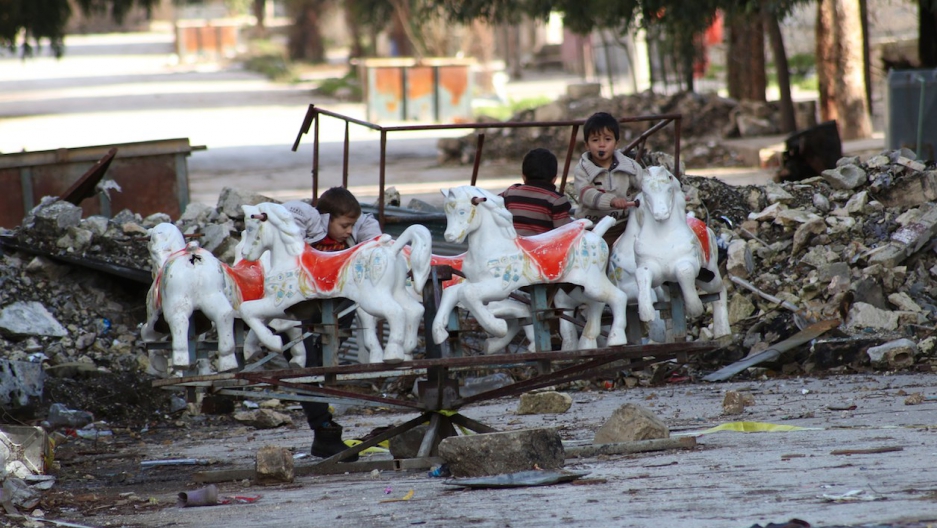 Children play on a damaged carousel in the northern Syrian city of Aleppo on Jan. 8, 2015.
Credit: ZEIN AL-RIFAI
Share

International media coverage of the war in Syria is full of shocking facts, and reminders of the horrific acts committed by the Islamic State and the Syrian government. Yet there is more to Syria’s current story than that.

When the news media ignores the heroism of everyday survival, it is dehumanizing to those engaged by the conflict and living in disaster areas. The stories of hope, joy amid pain, and impossible survival stir compassion for those fighting for their lives, the people who want their humanity back.

Every day in Syria, people defy hunger, scarcity and trauma in extraordinary ways. Their courageous actions seek to restore some normalcy and are a bold response to the deprivation imposed on their daily lives.

Most importantly, such actions carried out by local citizens maintain some trust in a country ravaged by a civil war that has destroyed the fabric of society. Some day, a post-war transition period in Syria will need the expertise of these resilient individuals who are solving seemingly insurmountable problems.

Every day in Syria, people defy hunger, scarcity and trauma in extraordinary ways.

The Syrian war is depleting almost every natural resource. Sources of energy have dwindled as the destruction spreads. Fuel and gas are almost impossible to procure, and, when available, are sold at prohibitively high prices.

Syrians are addressing this shortage in creative ways. Some harness the energy of the sun, installing solar panels on the roofs of their homes. Others power generators with methane gas that is fermented and siphoned from garbage and animal waste.

With no available alternatives, some turn plastic waste into fuel for vehicles and heating — despite the risks to health and the environment. Alternative energy generation carried out in rural areas can provide an entire besieged village with water and light.

More from GlobalPost: Meet the Yazidi family heading the fight against the Islamic State

Syrian citizens have turned to non-traditional means to express solidarity and hope for the future. It is not uncommon to see graffiti on the half-shorn wall of a destroyed building expressing that hope, and the promise to return home and rebuild. Messages like “Freedom has a high price” and “Stop the killing” announce the Syrian people’s views for the world to see. Elsewhere, Syrians are taking empty missile shells and turning them into pieces of art, flower vases or useful tools.

War also has destroyed green spaces like fields and forests. Agricultural lands have been burned, diminishing crops and leaving urban dwellers hard-pressed to feed their families.

Syrians who do not own their own land established rooftop farms to mitigate food scarcity and to fight the embargo. Small subsistence gardens have sprouted in deserted neighborhoods, where vegetables like parsley, lettuce and eggplants are grown. The harvests from these gardens provide food for families in a time of famine, although they are too meager to generate income. A Syrian man collects vegetables from a patch locals grew at the site where a barrel bomb hit a sewage pipe in the Baedeen neighborhood of Aleppo on Sept. 3, 2014.

Sexual violence endured by women and displaced families has been widely reported, but Syrian women are not solely victims. They have fought bravely for equal status and genuine participation in public life. High casualty rates among men have left women responsible for providing for their families. At great risk every day, they search for food and aid, and look for charity.

Women have also re-established schools for children as well as separate classes to build skills in practical trades for themselves. Other groups take this work to the next step, operating on a far larger scale. The Local Coordinators Network, for example, was started by a well-known lawyer who has established a network connecting Syrian towns and villages to organize resistance and document human rights violations.

After four years of war, bicycles have become the new norm of transportation. Before the war, girls were not allowed to ride bicycles, even with the approval of their family. It was believed that the practice would lead to women losing their virginity. The war and the dramatic rise in fuel prices have made bikes the preferred means of transportation for everyone.

More from GlobalPost: Reporting from Syria is nearly impossible at this point

Casualty figures from Syria’s war are catastrophic and the needs of survivors are increasingly dire. The demand for prosthetic body parts began in northern Syria in 2011. A project operated by Syrian Expatriate Medical Association now responds to calls from field hospitals within the country, delivering free prosthetics to those who have lost limbs.

Fitting the limbs, which are manufactured in Turkey, is done in the field. The workers also retrofit old pieces for children and assist in physical therapy instruction to ease patients’ transition into their new limbs.

War creates desperate, inhumane conditions for civilians, leaving them fighting with one another to survive. Despite this unimaginable situation, some Syrians have chosen to use whatever options remain to create their own means of survival and preserve their humanity.

Telling the stories of such simple, yet heroic, actions sends messages of solidarity and hope to those within Syria who are defying the odds in the face of death. Risking one’s life to establish ordinary decency in the midst of mayhem is, in itself, a declaration of one’s humanity.

Nisan Ahmado is a Syrian national living outside of Syria. She is an activist, blogger and translator. Nisan advocates for freedom, justice, and reconciliation for Syrians as well as for women's rights in the Middle East. This commentary is provided by Building Peace Forum, a magazine dedicated to themes of peace and security.