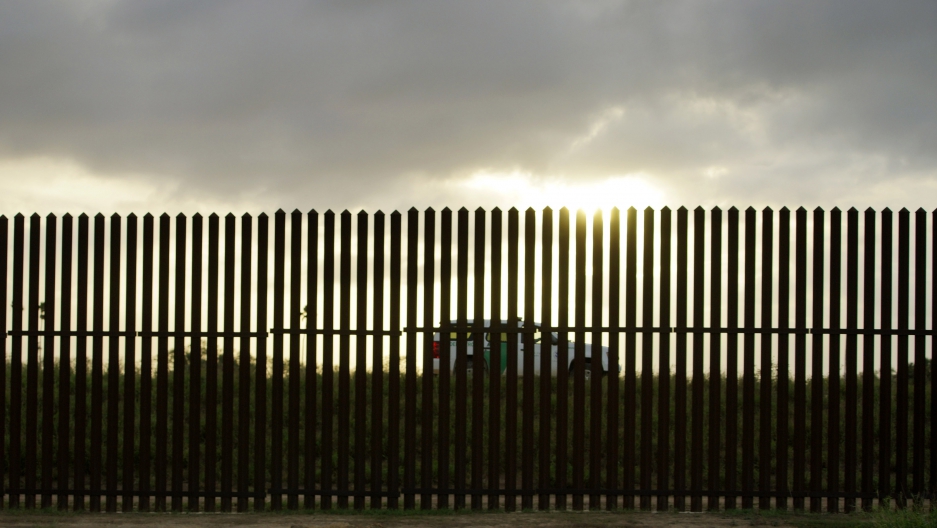 A US Border Patrol vehicle drives by the 18-foot (five-metre) high rusty steel barrier along the US-Mexico border at sunset in Brownsville, Texas.

Hungarian officials say the country is overwhelmed by thousands of migrants hoping to enter Hungary — the gateway to the European Union. In response, they're building a 108-mile border fence designed to keep them out, and they’re racing to finish the project by the end of the month.

But Élisabeth Vallet, author of "Borders, Fences and Walls State of Insecurity?" and professor at University of Quebec at Montreal, says that border walls don’t work.

“They do not prevent people from coming in,” she says. “If you consider border walls or fences as a public relations operation led by a government which is trying to show his population that he’s trying to do something, then they do work. They work as a symbol of a political goal, which is to show that you are secure within your territory.”

Vallet says it typically costs anywhere between $1 million and $10 million per half mile to construct border walls.

“It’s a very high cost just for the construction,” she says. “And then if we think about the maintenance of the wall, the border offices in the US have stated that it could be billions of dollars in the coming years. It is very expensive and won’t prevent anyone from coming in.”

According to Vallet, these walls often negatively affect the local economies on both sides of the border because the flow of goods, services and people are often halted. Furthermore, she says that it pushes the business of migration “underground” and often serves to keep those that have crossed in the receiving country.

One scenario she points to is that of migrant agricultural workers. If a Mexican migrant crosses the US border to work as a seasonal field hand, for example, a border wall makes it very difficult for that individual to cross back. For the migrant, it becomes more economical to stay in the United States if they are successfully able to get into the country from other entry points.

“You actually achieve the opposite of what you were looking for [with a border wall],” she says.

Beyond economics, Vallet says that border walls do virtually nothing to keep out terrorists.

“Look at what’s going on in Syria — young people are going from the US, from Canada and Europe to Syria, and they manage their way through very hard and secure borders that are being surveyed and policed because we fear those people going and coming back,” she says. “We can’t prevent them from going through.”

For many, these barriers seem like a quick-fix—and that’s because they are.

“The problem with border walls and border fences is that we’re not addressing the real issues,” says Vallet. “When we look at migrants, say those that are coming through Hungary and Serbia as we speak, the reason why they’re coming is not that they want to benefit from the generosity of the north. It’s a matter of security in their own country.”

On Thursday, dozens of migrants that were being smuggled across Europe were found dead in an abandoned truck on a highway east of Vienna. Vallet says it’s unlikely that migrants will return home once they’ve successfully risked death to go to a country they do not know.

“It’s [because] what you’re leaving behind is so bad that you’re desperate,” Vallet says. “When we erect fences, whether for terrorism purposes or migration purposes, we don’t look at the real problem. We put a lot of money into something that is a mere symbol.”

Vallet says that both modern and distant histories show this is the case. When examining modern day Israel, she says that border scholars conclude that decreases in terrorists attacks are related more to agreements between Hamas and Fatah, and the “pacification” of the Palestinian people and the region, than to Israel’s West Bank barrier.

“Regarding the Great Wall of China, by the time it was completed, the barbarians were not there anymore so it didn’t serve any purpose,” she says. “If we look at the Roman walls—there were some like the Antonine Wall in Scotland — those were designed to channel people in certain places and to be able to control flows. But the border was still seen as an open space or interface in between two countries. There were places where you would cross, maybe in designated areas, but you would cross nonetheless.”

When the Berlin Wall fell in November 1989, Vallet says the broken symbol allowed a new era of global peace to be ushered in, something that she says largely ended with the attacks of September 11, 2001. And as the world becomes increasingly interconnected in the 21st century, she says that physical walls seem more and more frivolous.

“People feel they suffer from globalization — from flows they cannot control,” she says. “Border fences and border walls do mean the return of the state and the sovereignty of a certain type of identity. In a way, it is laughable, but in another way, it is something that we have to address very quickly.”