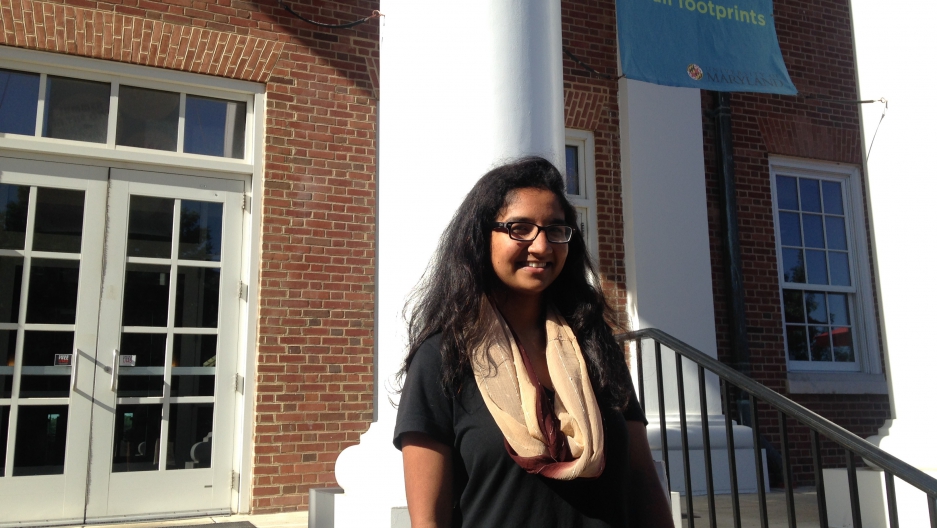 Amna Farooqi in front of University of Maryland's student union. The senior is Muslim, Pakistani American, and was just elected president of J Street U, the campus wing of the liberal pro-Israel group J Street.

The end of summer means students heading back to college, starting classes and taking up new roles on campus. On the University of Maryland campus this week, it meant games of ultimate frisbee and the drum and marching band starting to practice for football season.

For Amna Farooqi, a senior political science major at the University of Maryland, it means taking up a leadership position at J Street U. It’s the collegiate arm of the liberal pro-Israel group. Farooqi was elected its president last week.

“My background is a little different from many in the room,” she told the audience at a J Street meeting earlier this year. “I’m a Pakistani American Muslim. But I’m from Potomac, Maryland, so I guess I’m culturally Jewish.”

Farooqi grew up with lots of Jewish friends in the DC suburb of Potomac. But, being Muslim, she sympathized deeply with Palestinians.

The Israeli-Palestinian conflict wasn’t really something you talked about. By her senior year of high school, though, she did want to talk about it.

“I was editor-in-chief of our school newspaper, and the Palestinian Authority had submitted a bid to the UN for statehood,” she says. “I wanted to write an op-ed in favor of it, and one of my very good friends was very against it, and so we got into a pretty big fight, and that was like the turning point for me in realizing that this wasn’t just something I was intellectually interested in. I cared about it a lot.”

So she decided to learn about both sides.

“I knew there had to be truth on both sides just because that made sense to me. I don’t think anything is ever as one-sided as people like to think it is. And so for me it was just natural that since I felt so connected to the Palestinian narrative and Palestinian suffering that I needed to challenge myself more to understand the Israeli perspective, because so many people I grew up with clearly had a connection to this place.”

During her freshman year at University of Maryland, she got involved with Jewish student groups, including J Street U, and took Israeli history classes.

In one, the students actually play-acted a turbulent moment in the formation of Israel. Farooqi was assigned the part of Zionist leader David Ben-Gurion, Israel’s first prime minister. She spent weeks reading his diaries, and trying to see things as Ben-Gurion and his colleagues had.

“Understanding that there were all these people that were thinking so critically about their own identity in relation to other people. At that moment to be a Zionist was to care deeply about the future of your people and to try to save them. And I respect that.”

She spent time in Israel, first studying at Hebrew University, then this past summer working as a J Street intern. She’d call home and describe everything she was seeing to her parents—who can’t travel to Israel because they have Pakistani passports.

Paul Scham is the professor who taught the course where Amna Farooqi played David Ben-Gurion. He has kept in touch with Farooqi, and says he thinks her election to head J Street U (a group which he supports) will break down stereotypes Jews have about Muslims, and that it might also make Muslims hear the word “Zionism” differently. “It will encourage them to take a second look, and not think that Zionism is solely represented by settlers or others, but also has a liberation aspect to it.”

Scham thinks this is exactly why talking about the Palestinian-Israeli conflict on college campuses is so important. “There is actual discussion and debate going on. There is more of a possibility of students discussing and interacting and meeting people with other views.”

The election of a Muslim to head J Street U is, of course, not without controversy. Some commentators now question how committed J Street is to Israel.

But Seth Frantzen, a columnist and reporter for the Jerusalem Post, says that this could be an important lesson for Israel’s politics.

“The problem that we have in Israel is not just that the country is an ethnocracy in the sense that it’s a Jewish state. The problem in Israel is that even amongst the Jewish communities there’s a huge balkanization of what they call ‘tribalism’ here,” Frantzen says, talking over Skype from Jerusalem. “One of the big things Israelis can learn from this maybe is to say, ‘Wait a second, not everything has to be an ethnic ghetto. You can have diversity; you can have different types of voices.’”

Amna Farooqi says that her devotion to Israel actually comes from being a Muslim. “I am religious, I am Muslim, I care very deeply about that. But I think for me the way I practice that the most is by trying to make the world a better place. For me this is very Muslim work to try to be bringing together people who want to make a difference on this issue. Not just sit in the echo chambers but actually move out and make a difference.”