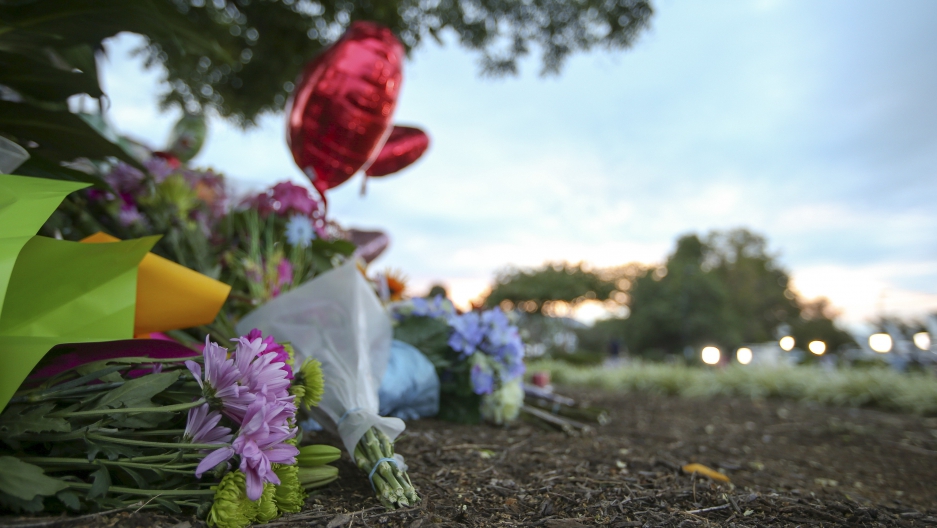 Flowers are seen at a memorial outside of the offices for WDBJ7 where slain journalists Alison Parker and Adam Ward worked in Roanoke, Virginia.

It's already being called America's first social media murder. We're debating a nation's exposure to the shock and immediacy of violence in its rawest form.

But for many Americans — myself included — the images from Wednesday's killings in Virginia, sadly, are nothing new.

It was nine years ago, back home in Chicago, that I got my first direct interaction with violence. Up until that point, my mother did her best to help me prepare to steer clear of it: whether that meant not letting me to walk to our neighborhood park alone as a kid, warning me to stay away from the living room windows on the 4th of July, New Year’s Eve, or any night the Bulls clinched a championship. And anytime I left the house, she said two words she still says to me now, even though we’re about 900 miles apart: be careful.

But all of that preparation evaporated at a red light nine summers ago on 95th Street, just down the block from the Obama family’s old church, Trinity United Church of Christ. Before that light turned green, I was just a mile from home and eager to finally eat something after getting out of a night class. But when that light turned green, I was shook. A bullet shattered the entire driver’s side window of my car. Wrong place, wrong time. It was too dark to see who did it. And I was too full of adrenaline to even know initially if I had been hit (thankfully I wasn’t). My only thought was getting home, so I drove off as fast as I could.

Unfortunately, too many, including in that same neighborhood, don’t get to make it home.

Peter Nickeas, an overnight crime reporter for the Chicago Tribune, has documented many of those stories, short and long, in neighborhoods across Chicago. Hours after Wednesday’s shooting in Virginia, he took to Facebook to write a post that reminded people of the regularity that such violence occurs in Chicago and countless other cities across the country but without the audience of the Internet or live television:

Today everyone saw what violence looks like, except the victims are usually a little younger and have darker skin. It's not often on tape so the reaction isn't so visceral. This is what violence feels like to people who see it happen, we can now all say, because we've all seen it happen.

In Chicago alone, it happens more than 2,000 times each year. Go to a crime scene and ask kids if they have seen someone shot. And the answer will be, "well, the first time ..." What the Internet is going through right now is almost a rite of passage for kids in urban areas.

Those kids, Nickeas writes, don’t have the option to press pause or unfollow:

Kids see the "oh shit" look on someone's face right before they get shot. And the video doesn't cut off. They hear the gunfire, see the body, see the police, see how the family reacts. Soaking it all up. And we wonder why a percentage of kids end up violent or starving for adult attention when they have to internalize all that anger and grief that the internet, collectively, felt today.

You wouldn't show the videos to your nieces and nephews. You'd go to great pains to prevent it from happening. City violence, any city, is often met with a collective "shrug."

That shrug includes treating children exposed to violence. In 2014, ProPublica called it a PTSD crisis being ignored in America’s inner-city communities. It surveyed top-level trauma centers in the 21 cities with the country’s highest murder rates at the time. What did they find? Only one center, the Spirit of Charity Trauma Center in New Orleans, screened all of its seriously injured patients for PTSD.

One of those many left untreated include Meosha Jackson, whom I interviewed in 2013 for a story about a group of Boston teens resisting violence and working to make their neighborhoods better. Meosha was 15 at the time, but by then had experienced the type of violence that some will never see in an entire life.

"I witnessed one of my friends get killed in front of my grandmother’s house, early in the morning — 7 o’clock — going to school," she said. "Somebody came and shot him to death."

"I lost my uncle to violence," she said. "Someone went in his house, and they, like, shot him to death. And it was kind of tragic because he was my favorite uncle. When I lost him, it was kind of like I lost everything."

And just the summer before we met, when she was 14, she lost another friend who was stabbed to death. But the breaking point for Meosha was losing her uncle.

"When it happened to my uncle, that’s when I became numb to it, 'cause after him, it was just, like, I don’t feel like I could take anymore, so when it happened to my friend last year — it hurt, 'cause I knew him well, but it was just, like, the fact that — I feel like the fact that he was gone is what hit me the most, but the violent part is something that’s kind of expected to happen around here."

Meosha maintained that she didn’t give in to settling for the violence, despite the numbness that it left her with.

"We all need to come together," she said. "And it shouldn’t just be when it seems tragic, because regardless of the situation, it’s tragic."