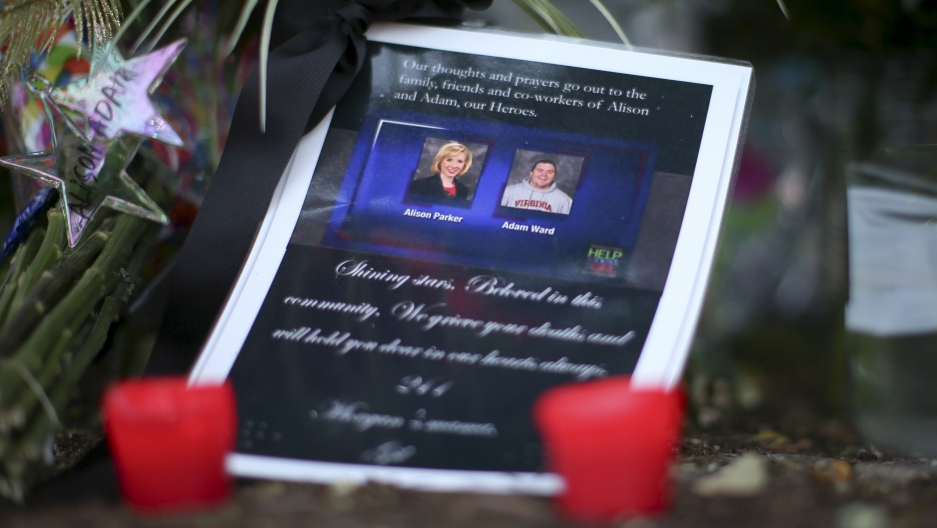 A picture of the slain journalists at a memorial held outside of the WDBJ7 newroom on Thursday.

Social media has become such a normal (and positive) part of many people’s daily lives, but yesterday offered a staggering example of its dark side.

On Wednesday morning, Vester Lee Flanagan shot and killed Alison Parker and Adam Ward, two reporters from WDBJ7, a CNN affiliate. The shooting was captured on film because Parker was filming a live interview, but a second video surfaced shortly after — recorded and posted by Flanagan himself.

Shortly after the attack, Flanagan — who was known by his colleagues as Bryce Williams — faxed a rambling 23-page manifesto to ABC News that all but pitched his attack as a news story. He also posted the video on his personal Twitter and Facebook accounts, along with negative comments about the two victims.

Flanagan’s accounts were deleted soon after he posted the video, but the incident has raised questions about the role social media plays in these tragedies, as well as society’s response to them.

Zeynep Tufekci is a professor at the University of North Carolina, Chapel Hill who writes about the internet and society. She says there are definitely parallels between how Flanagan used social media to broadcast the shooting and how ISIS uses it.

When the first ISIS beheading video surfaced, it was all over social media, she says. But then there was a backlash.

“A lot of us said, ‘They're killing for publicity, and we're giving them publicity.' The next time it happened, I got a lot of warnings from my friends. I gave some myself. I said, ‘Let's not share this. Let's instead share pictures of the victims.’ Mass media also adopted a lot of this attitude, and now when ISIS does a ghastly murder on video it doesn't go viral on my social media," she says.

Tufekci says these types of videos are meant to sensationalize the murders in the hopes of getting other troubled people to join or copy them.

And the limited research available suggests that it may work. A 2002 survey of 81 juvenile offenders in Florida found that more than a quarter of them had committed a ‘copycat crime,’ inspired by something they had seen in the media.

Recognizing this motivation just might put the power back in the social media users’ hands.

“We can really approach it differently, and learn from how we learned to react to ISIS,” she says. “If somebody is killing for publicity, denying them that publicity is a crucial component of trying to dampen that effect.”

Many prominent Twitter users seem to agree with that sentiment.

Guardian Columnist Jessica Valenti tweeted “Please do not tweet the shooter’s name or link to his social media profiles. Yes, he taped the murders. No, no one should watch it.”

Spencer Ackerman, another Guardian reporter, tweeted, “If you don’t have a professional reason to watch a snuff video, I encourage you to neither view it nor share it.”

Even Brent Watts, a meteorologist at WDBJ7, chimed in.

Obviously, people who want to see these types of videos can find them. It is the internet, after all. But Tufekci says it's still important not to post them.

"There's a very different effect between something existing on a seedy corner of the internet for somebody already troubled, versus mainstream attention, which is what the next troubled person is seeking and will be inspired by," she says.