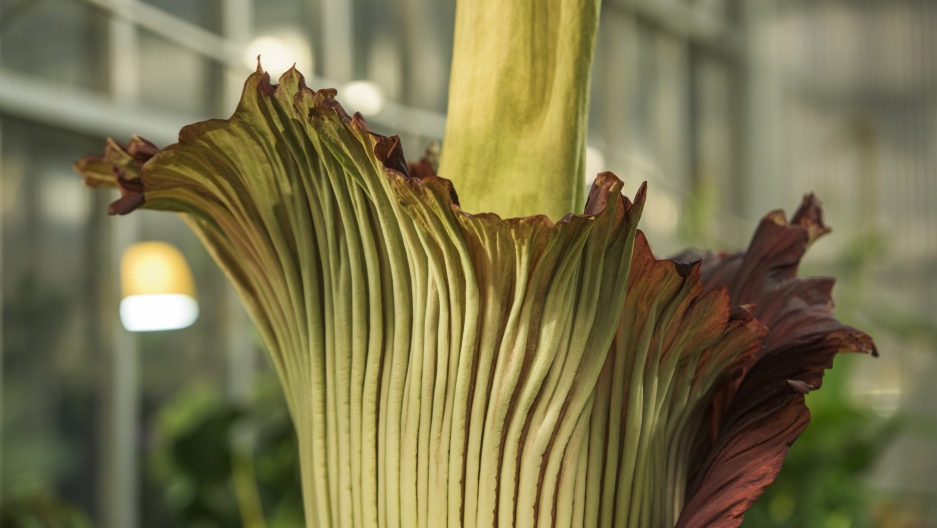 The corpse flower blooms at the Denver Botanic Gardens.

A rotten stench has been wafting through a greenhouse at the Denver Botanic Gardens — and visitors are all too eager to breathe it in. Who knows if they’ll ever get a second chance?

The odiferous offender is a plant native to the Indonesian island of Sumatra and known commonly as the "corpse flower" — for reasons that are pungently apparent when it starts blooming. At that point, it becomes a botanical stink bomb, emitting a noisome odor evolved to attract certain beetles and flies, which unwittingly spread the plant’s pollen. All told, the blooming process can take about 36 hours and won't happen again for years — if ever.

“It’s something that is potentially a once-in-a-lifetime opportunity to see,” says Nick Snakenberg, curator of tropical plants at the Denver Botanic Gardens. “We made the mistake of saying it might bloom on [August] 16th, and we had people lined up at the gate.” The garden has several corpse flowers, but this is this particular flower's debut bloom. The process started on Tuesday evening and finished on Thursday. This week, a corpse flower is expected to bloom in Chicago. 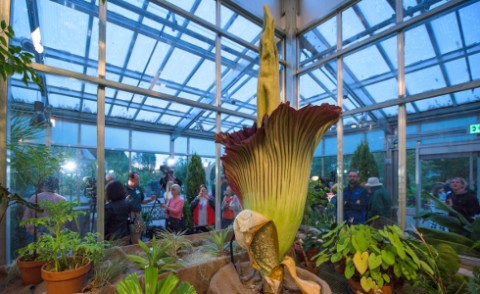 This corpse flower in Denver has now died, but another in Chicago is about to bloom.

The corpse flower belongs to the same family as common houseplants such as philodendrons and peace lilies. But unlike its more domestic cousins, the place you’ll most likely find this tropical species — which can reach 15 to 20 feet in its vegetative state, according to Snakenberg — is in university and botanical garden collections. In the floral stage, the plant is shorter.

It takes a lot of energy, and a long time, to build up a bloom. When a corpse flower finally starts the process — the Denver specimen is an estimated 12 or 13 years old — a leaf-like sheath called a spathe unfurls, revealing a ruffly, burgundy interior that starkly contrasts with the plant’s green exterior. In its fanciful shape and two-toned hues, the structure is reminiscent of a weird hat you might see in a Tim Burton film. 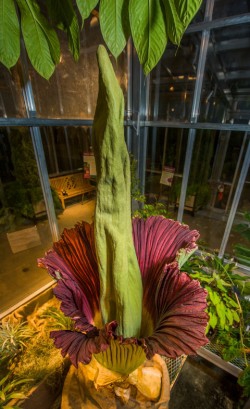 But the plant’s true centerpiece is a fleshy, protruding structure called the spadix, which inspired its scientific name, Amorphophallus titanum. Translation? “The giant misshapen phallus,” says Snakenberg. The spadix also heats up, probably as a way to better waft the stench to would-be pollinators.

Out of sight at the base of the spadix hides the actual flower — or flowers, to be more precise. In fact, the corpse flower is the largest unbranched inflorescence, or collection of individual flowers, on earth. The female flowers mature first, followed by the male ones, which produce the pollen that the insects collect.

The odor that emanates from the flowers is a putrid potpourri of chemicals, explains Todd Brethauer, a science education volunteer at the United States Botanic Garden, in a video produced by the American Chemical Society. Characteristic molecules include dimethyl trisfulfide, “which you can sort of describe as the smell of rotting onions or rotting cabbage,” says Brethauer, as well as trimethylamine, “which is the essence of rotting fish,” and isovaleric acid — “essentially the smell of old sweat socks.”

Given the plant’s fetid scent, why do visitors come in droves to sniff and see? “I think people have a similar reaction to this as they would to, say, a roller coaster ride or a haunted house or something like that,” says Snakenberg. “I think it's just wanting this sensory overload in a safe environment. A shock to the system.”

But maybe those visceral thrills will translate into something with staying power — at least, that’s what Snakenberg hopes, anyway.

In the way that big cats and bears excite zoo goers about the animal kingdom, “I think having plants like the Amorphophallus titanum species in our collection is a real strong tool to excite people about plants,” he says, “and when we get excited about plants and about animals, we get excited about conserving them in the wild and protecting their environments. And when we protect the megaflora and the megafauna, just by default, we’re protecting everything else that lives in those environments” — the stinky, the sweet and all that's in between.