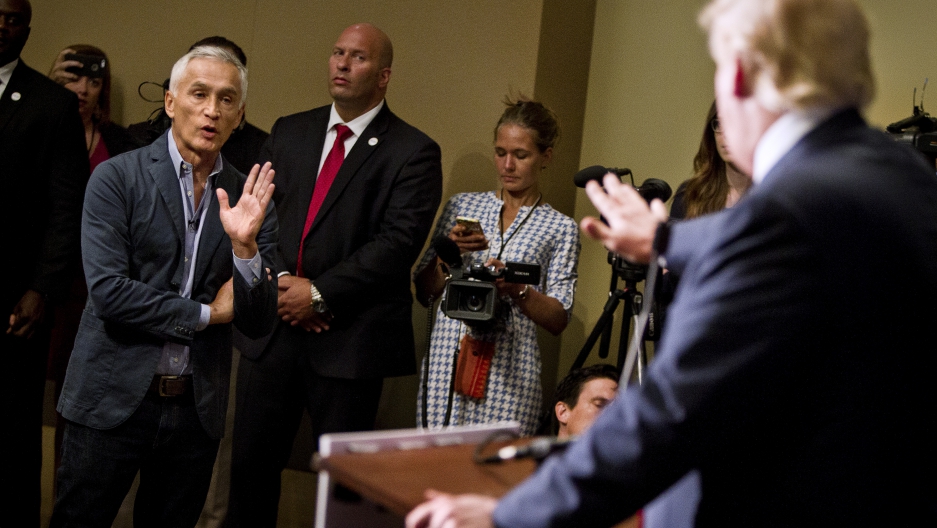 Let’s get to the actual question — and what Jorge Ramos tried to ask Donald Trump last night: How does he plan to deport more than 11 million undocumented immigrants, as he has often repeated?

It’s a critical question for all Americans and, especially, Ramos’ audience. For Ramos, the popular anchor for Fusion and for Univision, the biggest Spanish-language network in the US, there is no room to see the Republican Party presidential front-runner in the abstract or as a source of political humor.

For many immigrants and their families, what Trump proposes hits squarely at home. And Ramos — whether he’s tagged an “activist-journalist” or one who is appropriately aggressive in his questioning of Trump — knows he must ask it. Other journalists do, too. Again and again.

Read Trump’s immigration proposal. Doesn’t take long. And find out why more specifics are needed. He calls for the “mandatory return of all criminal aliens.”

That leaves a lot open to interpretation. Who and who won't be subject to return, exactly? And when Trump says undocumented immigrants and their US-born children "have to go," does that mean the disruption of millions of families. Estimates of the cost have ranged anywhere from $141.3 billion to $600 billion.

In the Global Nation Exchange

What are the questions we should be asking presidential candidates?
Join the discussion

Trump also pledges to dismantle President Barack Obama’s Deferred Action for Childhood Arrivals, which has protected thousands of immigrants who arrived here as children from deportation. It is a temporary program, however, and those enrolled feel vulnerable to political shifts that can change their lives drastically. Ricardo Aca, who works in the Trump SoHo Hotel in Manhattan, told us more about what this uncertainty feels like.

And the list of statements and proposals on immigration from Trump goes on, from ending birthright citizenship to making Mexico pay for a border wall. It makes for a lot of opportunities to check the facts when it comes to immigration, and present the realities of what the border wall means and effectively does.

To some journalists, it also means pounding away — just as Jorge Ramos did — to demand more specifics from Trump.

In his own words

Even if doing so means a sharp focus on a politician who is a master of distraction.

Good read on how/why the press and Trump's political opponents are struggling to deal with him http://t.co/hN8SFMhpLt pic.twitter.com/OxnBJ9yw2u