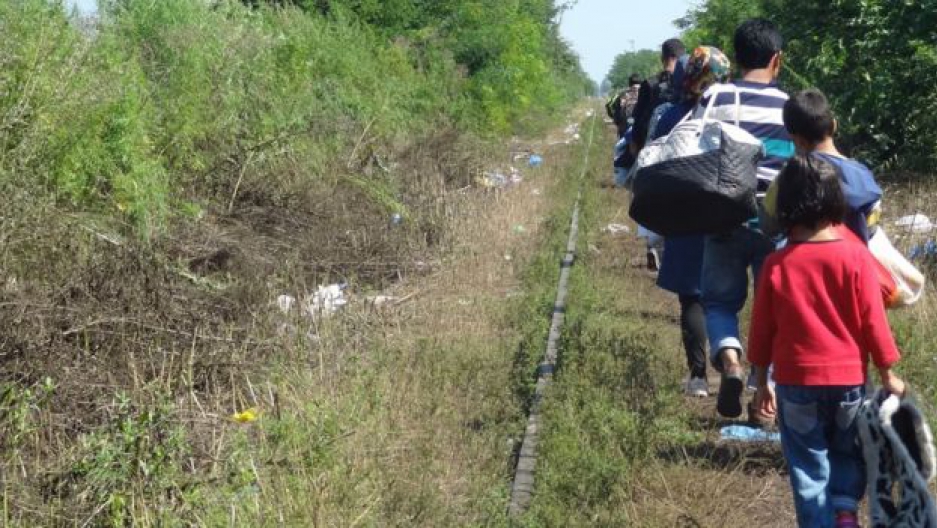 Afghan migrants walk down the track towards Hungary

There's a mood of exhausted chaos at the roadside near Roszke. More than a hundred Afghans, Syrians and Iraqis stretch out on the dry grass.

Some build fires in the early morning to keep warm. Small children munch apples they picked on the way from Serbia. Hungarian police stand guard, their smart blue uniforms and red caps in sharp contrast with the rags of the refugees. The late summer sun pushes the temperature close to 86 degrees. A police bus arrives and people line up to be taken to their first refugee processing centre nearby.

Just across an open field, Hungary's new "wire barrier" glistens in the sunlight against the tall stalks of maize. It consists just of coils of razor wire for now — the real fence comes later — and some migrants have just pushed it down or thrown blankets or sleeping bags over it, to lessen the danger of injury.

But at this point on the border most take the easier option. They simply walk down a rarely used railway line, which cuts a path through the fence. There, more policemen stand to welcome them in English — serious, but not unfriendly:

"Carry on down the track — one kilometer."

A bizarre contrast has emerged in Hungary's handling of the refugee crisis. While the government rages against "illegal migrants" and state-run media warn of the infectious diseases they may be carrying (hepatitis and syphilis are the most mentioned), the police on the border continue to work under procedures in full harmony with their country's obligations under the 1951 UN Refugee Convention.

Up the track in Serbia, an 18-year-old man from Afghanistan rests with his family. His grandmother is in her 70s. Her wheel chair rests in the long grass beside her. He has pushed her all the way from Afghanistan, he says. She looks exhausted, but still dignified in her black headscarf. She declines to be photographed.

This double-sided Hungarian response is as evident in the capital as at the border. Budapest has three major stations — Keleti, Nyugati and Deli — (East, West and South). They are all almost overrun with asylum seekers. Some are doing what they have been told, and travelling between refugee camps with documents that expire within 48 hours. But most are looking for trains, buses, taxis, or car-drivers who will take them to Austria or Germany.

Budapest's city council has provided running water and toilets. Volunteers move through the crowds distributing food, clothes, and even combs for the ladies. A woman dressed as a clown entertains the children.

However, Hungary still continues to build the fence along its border. It is well past the halfway mark, with about 68 miles of the 109-mile fence now in place.

A local journalist worries out loud. "The mood is fine now, because the police are polite with the refugees, so they are friendly in return. But the violence in Macedonia — when the police briefly fought back the migrant influx with teargas and stun grenades — is a worrying sign of what might happen here."

This story was cross-posted from the BBC World Service which co-produces the weekly radio show PRI’s The World.