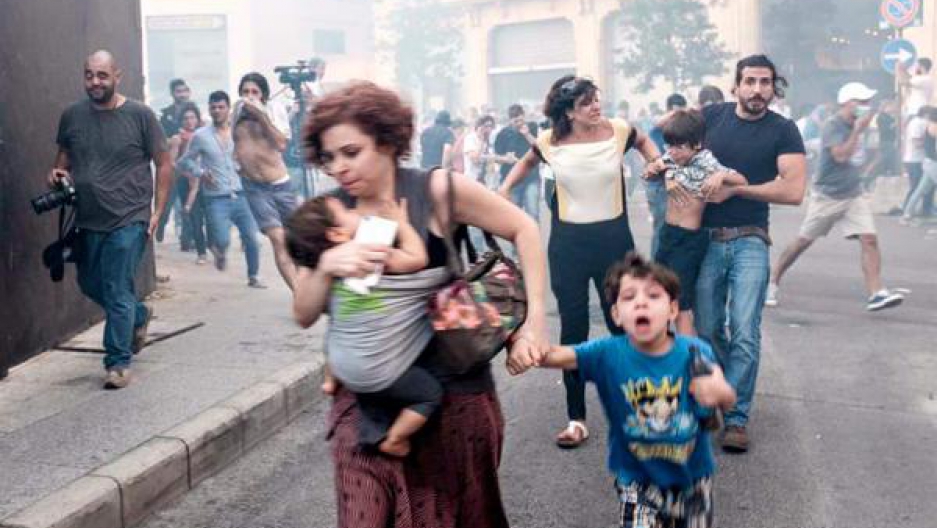 A mother and her children escape teargas fired by police on protesters in Beirut on Aug. 22, 2015. 10,000 protesters gathered to demand a solution to Lebanon's garbage problem; the event began peacefully.

Tear gas, water cannons and live bullets: This is the violent response that awaited the peaceful protesters of the #YouStink movement who gathered at Riad El Solh in Beirut on Saturday to demand a solution to the garbage crisis in Lebanon.

An estimated 10,000 people, in what appeared to be good spirits, came to call for a “sustainable solution to Lebanon's waste disposal problem.” On July 17, the country's largest landfill was closed and rubbish started piling up all over Beirut. Rubbish and summer do not go hand-in-hand, and as the waste bags continued to pile up along the streets of Beirut, the appalling stench poisoned the air, rubbing Lebanese people in the nose.

Many of those who turned up at the protest were wearing costumes and some brought their young children along. Extreme security measures taken by the army and riot police were at first more a joke than anything else, but tension escalated dramatically when security forces responded with disproportionate violence, catching protesters and the press off-guard.

Photographer Karim Mostafa shared photographs on Twitter of what became a violent confrontation, fueled by the riot police's brutality:

And when there was water! From the demo in #Beirut this afternoon. #Lebanon #YouStink #Trash pic.twitter.com/l0l9jcw6An

A protester gets help at #YouStink demo in #Beirut pic.twitter.com/MIGhKwLRCI

A wounded and lonely police start crying but gets help from the people in the demonstration. #YouStink #Beirut pic.twitter.com/84KYTdcAtA

In response, protesters have staged a sit-in at parliament, until the body resigns and new elections are held. Lebanon, already suffering from a poor infrastructure and daily electricity cuts, has had no president for more than a year. In 2009, its parliament extended its term until 2017, with no elections, citing instability as a reason.

Nancy Fakhoury shared a video showing protestors chanting on August 23, on day two of the sit-in.