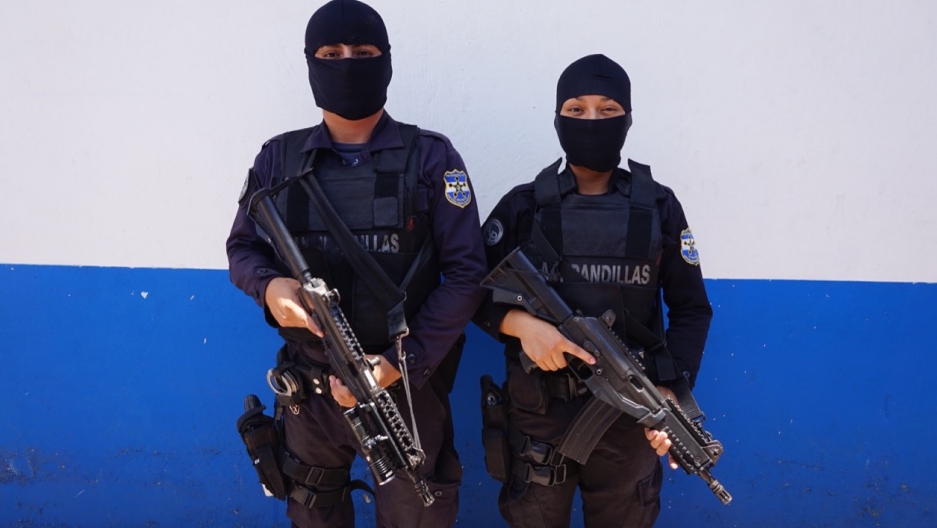 SAN SALVADOR, El Salvador — Seated in full body armor, with an ACE 21 assault rifle resting on her lap, Agent “China” speaks rather calmly about enlisting to patrol one of the scariest police beats in the world.

Agent China (she asked to use only her code name, for her own safety) studied to be a secretary, but joined the police force last year at 22 to provide for her mother and two younger brothers, she says. Her uncles were cops, and she felt personally called to fight the crime plaguing El Salvador.

She now works with the anti-gang unit, stationed across the street from the fortress-like police headquarters in San Salvador.

“I was a little nervous on my first raid,” China says. “When you get to a house, we can’t really knock. Then you get in there and you see the guys with the tattoos, it’s scary.”

On Monday, the Salvadoran Supreme Court declared the country’s major gangs “terrorist organizations,” perhaps the government’s strongest step yet in characterizing the power the groups have in the country. With the average now at 25 violent killings per day, El Salvador is on pace to replace Honduras as the world’s most murderous country outside a war zone.

Estimates suggest gang members and affiliates already outnumber the country’s 25,000 police officers. The gangsters mainly belong to the Mara Salvatrucha and the 18th Street gangs. The latter has split into two groups, the Sureños and the Revolucionarios, who are blamed for most of the increased violence this year. Members of the 18th Street gang at the Cojutepeque jail in El Salvador.

Twenty-five small children of police (age 5 and under) lost a parent this year. In response, President Salvador Sanchez Ceren announced financial support for the families of slain officers, though the program will only aid relatives for one year.

It wasn't supposed to be this way. A so-called gang truce from 2012 to 2014 was credited with actually bringing down the country's alarming murder rate. Police and gangs were all thought to be living side by side in a relative, tenuous peace.

Then the truce broke down, and murders spiked again.

Gangs claim the police escalated the battle first. In April 2014, the gangs accused the cops of 330 unjustified and unprovoked killings of gang members. Now, the gangs feel pursued by the police, and have started killing more cops, particularly when off duty when they have no backup, says Daniel Valencia Caravantes, a crime reporter at respected Salvadoran investigative journalism outlet El Faro.

Still, eligible recruits between the ages of 18 and 27 line up to join the force. The base salary is just $450 a month, but that's still more than the minimum wage in a country where unemployment and poverty are high.

Officers are not the only victims in this brutality, however.

Besides claims by the gangs, news sources like El Faro have accused police of extrajudicial killings. Those allegedly include the mass slaying in March of an 8-year-old boy named Danny along with seven other people.

“[President Sanchez Ceren] has turned and is now the first advocate who says ‘shoot first, ask questions later,’” Valencia Caravantes says. “There was a small war in the department of La Paz between the police and the gangs, and this attitude of responding with such action has permeated the entire police force.”

Salvadorans often say the national mood is as dark as it was during the civil war from 1980-92, with struggling individuals seemingly trapped in a pit of violence, neighbor against neighbor.

Pedro Gonzalez bridges the wartime and the modern gang battle. He served as an army lieutenant in the '80s, then helped co-found the Civilian National Police after the war.

At a recent job fair for 300 positions in the police force, 5,000 interested job seekers showed up. Gonzalez emphasized the Spanish word “abarroto,” “packed,” to describe the crowd.

“People are looking for work,” Gonzalez says. “But I tell them, here you should be looking for a vocation. You need to be a disciple. Your life is not worth $450, it doesn’t have a price.”

Agent China slipped on a black ski mask for anonymity before allowing a picture for this story.

“To be a police officer today in El Salvador is something personal, it’s a pride,” China says. “We cannot be left defeated.”