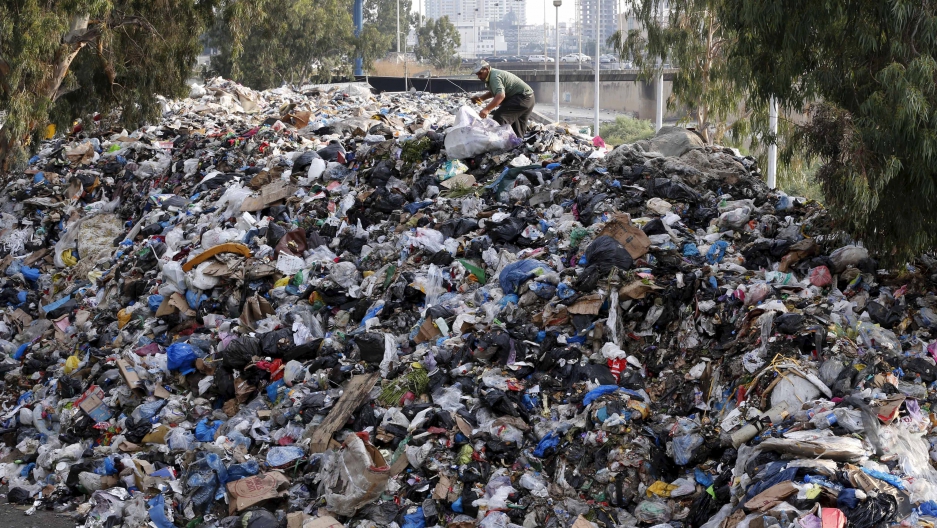 A scavenger sifts through garbage piled up on the banks of a Beirut river. The trash has been sitting uncollected along the streets for more than a month because one of the city's largest landfills is full.

The trash crisis in Lebanon doesn't appear to be ending any time soon. Fights have erupted between police and hundreds of demonstrators over heaps of uncollected trash in the capital city, Beirut.

Since the middle of July, more than 20,000 tons of garbage has accumulated all over Beirut. Rami Khouri, a senior fellow at the Issam Fares Institute at the American University of Beirut, says people are disgusted by the fact the government can't resolve this situation.

The protests are taking place under a campaign called "You Stink." But the slogan isn't directed at only the garbage problem. That's just the tipping point.

Khouri says politicians "sit there acting like prima donnas and have all the benefits and privileges and perks of high office and they can't do the work that a government should do, which is to provide its citizens with electricity, water, decent education, jobs, security and garbage removal."

Images from a protest

On Tuesday, trash collectors finally started removing some of the rubbish, reports Beirut resident Rami Khouri. But there was no celebration. "They just took the trash and dumped it in other parts of the country — so it's created a huge problem in other places. And in Beirut, where there are still piles of trash, it's pretty awful."

Lebanon's government is shared between 18 different religious groups, to ensure equal representation between the country's Christian and Muslim groups. But there is currently no permanent president, despite repeated attempts by parliament to select one.

People of Beirut started to speak out publically, saying they were "fed up" and wanted a new parliament that would address the needs of the people.

"So this public challenging of the sectarian leaders who have dominated for four generations is really quite historic."