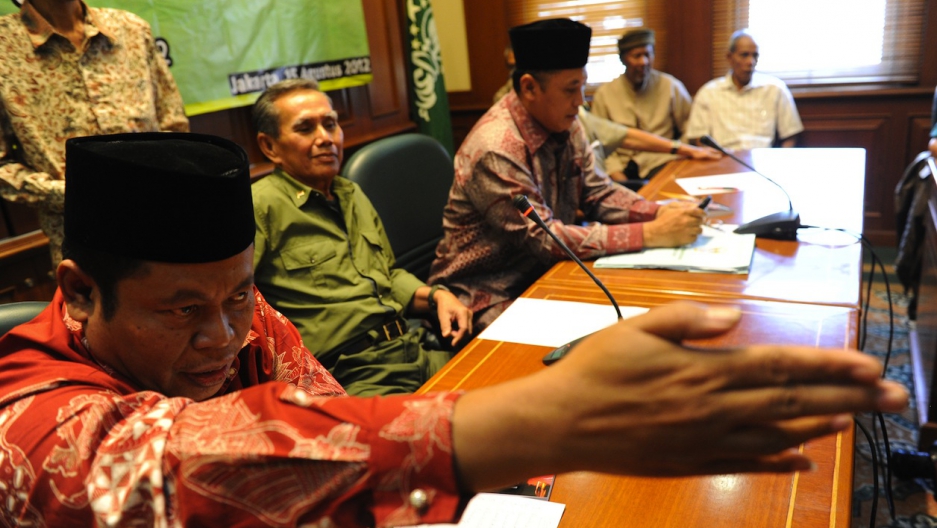 Indonesia's retired military commanders reject any apology to the victims of a bloody anti-communist purge, when between 500,000 and two million suspected communists were killed in purges in 1965 and 1966.
Credit: ROMEO GACA
Share

JAKARTA, Indonesia — Fifty years after a brutal crackdown on communists in Indonesia that left half a million dead, communism still haunts the country.

Here, it's still a banned ideology, a sweeping insult, and a hazy memory even for those whose families were hurt by false charges of "communism" used to suppress journalists and dissidents.

Felencia Hutabarat was 19 when she learned that, before she was born, her dad had spent 12 years in jail as a political prisoner, a “communist.”

“All I knew about that time, I learnt it at school. Those of us who grew up in Indonesia up until 1998 had to watch this movie about communists, every year. They were bad, they killed the generals and we had to be careful, it could happen again, anytime. I grew up watching that. Not knowing anything.”

“My family is a history marker,” she laughs. Her older brother was born in 1965, the year the six army generals every Indonesian knows about were kidnapped and killed.

More from GlobalPost: The quiet agony of filming 'The Act of Killing'

Felencia was born in 1978, soon after a first wave of political prisoners was released from the infamous Buru island prison. Including Felencia’s dad, who was actually a journalist, not a communist.

Seventeen years after the fall of the regime of General Suharto, whose anti-communist regime presided over the killings of at least 500,000 communists or alleged communists — including ethnic Chinese, unionists, leftist sympathizers, intellectuals — there has been no state investigation into the killings, and "communism teaching" is still banned. Thousands of political prisoners who were locked up without a trial still await an apology from the state.

In 2012, the National Commission on Human Rights ruled the killings a gross violation of human rights and called for those responsible to be brought to justice. The government’s answer, in the words of Djoko Suyanto, who was then the coordinating minister for political, legal and security affairs: “Define gross human rights violation! Against whom?”

There have been attempts to talk about what happened, to show what kind of impunity those responsible for the massacres still enjoy, most recently in the astonishing documentaries "The Act of Killing" and its sequel, "The Look of Silence."

More from GlobalPost: Oppenheimer’s ‘The Look of Silence’ casts a chilling gaze at massacre survivors

But the Indonesian team who worked on the films all “chose” to remain anonymous for fear of retaliation. In the central Javan city of Solo last February, the police banned a seminar organized by a victim advocacy group because of “pressures from different groups.”

Of course some things have changed. Indonesia is now a democratic state. “ET” — for “eks tahanan politik,” ex-political prisoner — no longer appears on ID cards. Students are not forced to watch the propaganda movie about the “treachery” of cruel and bloodthirsty communists who had to be “exterminated” by brave soldiers.

But the memories still haunt those who were persecuted under the banner of "anti-communism."

"They don’t have faith in this democratic era of Indonesia."

Vannessa Hearman, a lecturer in Indonesian studies at the University of Sydney, has interviewed many former political prisoners. She says most of them don’t dare to talk openly about the past.

Because communism is still forbidden, because events get banned, “people feel they can’t really let their guards down.”

“They’re concerned that if they’re completely honest about who they are there will be a backlash. If not against them, then against their children. … They don’t have faith in this democratic era of Indonesia.”

Last summer’s presidential campaign showed that insinuating an opponent is a communist remains an effective smear. The current president, Joko Widodo, arguably lost points in the presidential race after his opponent’s campaign team accused him of having communist sympathies.

Earlier this year, a Jakarta official called “conspiracies” against him “a new form of communism" as a way to defuse criticism.

As Hearman puts it, “communism” is certainly still “the country’s bogeyman,” even if the meaning's not very clear in their minds.

When asked, people in Jakarta say that communists are "cruel and evil," as Ali Gaang, a 69-year-old newspaper seller, told GlobalPost.

Adi, a 29-year-old nurse, agreed. “Indonesia believes in one God. The communists want to change that, they want to turn Indonesia into a atheist country. It’s very dangerous.”

“There are still a lot of communists but they act more subtly, they’re harder to recognize.”

She knew, of course, about the killings of the generals, not about the killings and imprisonments of “communists.” When asked whether there should be a state investigation into that, she shook her head. “Communists are evil, why bother.”

Some people we talked to said they suspect they were “brainwashed” at school. None of them knew about the 1965-66 massacres.

Ironically, says Hearman, the legacy of communist ideology is still visible in the policies and ideas of Indonesia's leaders.

“The ideas of nationalism, of the right to control their own resources, of not wanting to be exploited by imperialist countries. … Often people might not realize that all these ideas have come from very strong leftist movements in Indonesia in the '50s and '60s.”

Ken Setiawan’s father was also imprisoned on Buru island for eight years. Her story, she says, is different from that of other children of political prisoners, because she mostly grew up abroad. “My dad was never quiet about his experience, it was openly talked about at home,” she says. “The message was simple: Your dad was part of an organization which wasn’t liked by the people in power and then they sent him to jail.” She says the fact that she always knew about it makes it even harder for her to understand how little awareness there is about what happened in Indonesia.

Last October, Setiawan wrote about her experience in the Jakarta Globe. “As the daughter of a former political prisoner I have been asked, 'What is it that you want?' More than anything else, I want an acknowledgement,” she wrote. She hopes this will come from Indonesia’s new president, the first leader not to be linked to Suharto’s former regime.

“I hope that Jokowi lives up to his promise of bringing a new democracy to the country. Be courageous, Jokowi. Acknowledge past wrongs and put Indonesia on the road towards justice.”