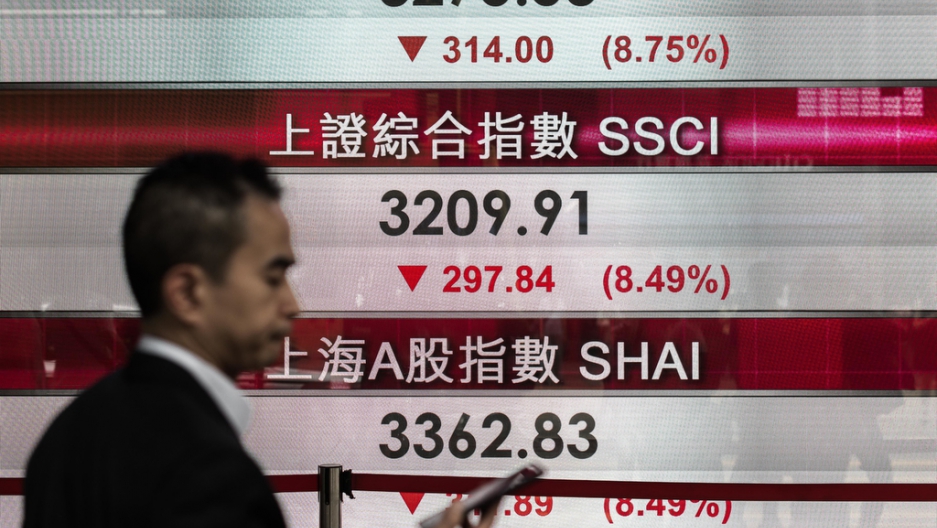 A man checks his cell phone in front of an electronic board displaying stock market information in Hong Kong on Aug. 24, 2015.
Credit: PHILIPPE LOPEZ
Share

There’s a saying among investors that if China sneezes, the world catches a cold.

Judging by the savage sell-off on global markets on Monday, people were worried about being infected with something far more deadly.

A more than eight percent plunge on China’s main stock market in Shanghai — the worst one-day fall since 2007 — ricocheted around the world as investors fretted that the Asian economic powerhouse was weaker than previously thought and that it could tip the world back into recession.

Most markets rallied on Tuesday, boosted by bargain hunting. But China continued its rapid descent even after the central bank cut interest rates to calm investor nerves. The Shanghai Composite Index closed down more than seven percent.

But is the situation in the world’s second largest economy that bad? The answer alarming many investors is: no one really knows.

Based on the official data released by the Chinese government in recent months, the economy appears to be in bad shape.

Exports — still a key driver of the Chinese economy despite efforts to reduce the country’s reliance on shipments of toys, cars and smartphones for growth — fell more than eight percent in July.

On top of that, Beijing unexpectedly devalued the renminbi, suggesting Chinese leaders were far more worried about the economy than they had been letting on, and the stock market crashed, taking with it the life savings of many Chinese investors and their faith in Beijing's ability to perform financial and economic miracles.

And if that wasn’t enough to put a few grey hairs in the well-dyed mops of China’s policymakers, the once-booming property sector is in trouble, local governments are deep in debt and there are fears that the unemployment rate could rise — if it isn’t already — as factories lay off workers or are forced to close due to the slowdown.

But here's the bit of data that really rattles investors’ nerves.

Despite the growing signs of stress in the economy, China’s gross domestic product, the most important gauge of economic activity, grew a better than expected seven percent in the second quarter, year over year. That matched the first quarter growth rate and just happened to be in line with Beijing’s annual target.

That has fuelled speculation that the country’s number crunchers are fiddling with the data to make the economy look better than it really is.

In China, that’s a legitimate worry. Observers have long been suspicious about the accuracy of Chinese economic figures on which the country’s unelected politicians base their careers and legitimacy.

During a dinner in 2007 with then-US ambassador to China Clark Randt, the now Chinese Premier Li Keqiang admitted China’s economic figures were “man-made" and “for reference only,” according to US diplomatic cables published by WikiLeaks in 2010.

Not much is likely to have changed since then.

"The question is not whether they're right, it's how wrong are they," Derek Scissors, an Asian economics expert at the Washington, D.C.-based think tank American Enterprise Institute, told CNN Money.

All of this matters for the rest of the world because of China’s size and importance in the global economy, a fact that has concerned its trading partners and regional neighbors in the past.

For now, though, a weak China is a lot scarier than a strong one.