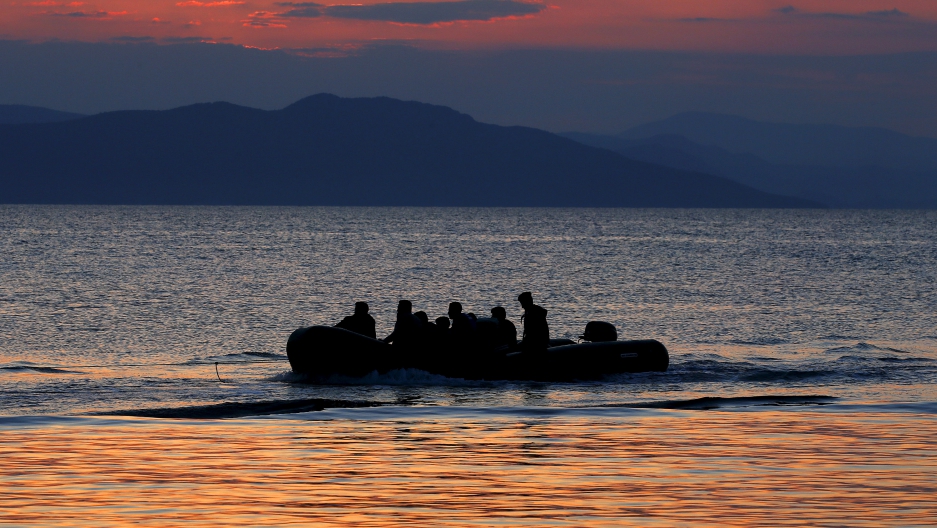 A dinghy with Syrian refugees is towed by a Greek coast guard patrol boat into the port on the Greek island of Kos, following a rescue operation in a part of the Aegean Sea between Turkey and Greece, early May 31, 2015.

Thair Orfahli stepped onto the boat knowing he might die. But that same reality faced him if he stayed in Syria.

Only a few hours before, he had bid his friend goodbye, handing over his laptop — his most-prized possession. "I told my friend if I didn't arrive, you can call this number and give everything [to] my family," he recalls.

Orfahli is one of thousands of men, women and children fleeing war-torn countries in the Middle East. He calls Syria home — or at least he used to.

Not long ago, he was a law student in Lebanon. He regularly went back to visit his family in Jobar, not far from the Syrian capital Damascus. Life was good.

Then came the war. The bitter fighting between the Syrian army and the opposition intensified.

Jobar became a battleground. "It [was] very dangerous. [There were] a lot of bomb, bomb, bomb," he says.

Thousands of Syrians have had to flee their homes during the country’s four year civil war. Many are living in refugee camps in neighboring countries as well as in Europe. So far, the US has accepted only tiny numbers of Syrians. Daryl Grisgraber of Refugees International says one big hurdle is the long security check process.

Soon neighborhood men started to disappear, either forced to fight in the Syrian army or locked up because they were considered members of the opposition.

In 2012, life in Jobar simply became unbearable. "I [took] my family and my mother and my sister and ran away to Lebanon," Orfahli recalls.

But even in Lebanon, he didn't feel safe. As a young and able Syrian, he feared he would get caught by Syrian regime sympathizers and sent back to fight. The thought terrified him. So, once again, he found himself on the move. This time, alone.

"In 2013, Thair became a refugee from the war in Egypt," says Sara Bergamaschi, a close friend of Orfahli.

Bergamaschi, who's Italian met Orfahli on a trip to Syria back in 2009.

"We spent almost every day together," she says, "We traveled all over the country. We became like brothers and sisters."

Bergamaschi says not long after Orfahli moved to Egypt, he began looking for work. There was just one problem: he needed a work permit.

"According to Egyptian law you need to ask for this work permit from the Arab legal organization of your own country," she says.

In short, Orfahli had to go back to Damascus in order to get the permit. Meanwhile, Orfalhi's student visa was running out fast and just when he thought things couldn't get any worse, they did. His passport was stolen. With no passport and no work permit, he had to act fast. He decided to make his way into Europe.

With so many Syrian refugees trying to make it to Greece and Italy, smugglers are not hard to find. A couple of phone calls later, Orfahli had found his smuggler.

The smuggler agreed. He promised Orfahli he would be in Italy within five days.

But the time it actually took to get there? Ten days and 12 hours. Orfahli, along with more than 100 refugees spent more than 10 gruelling days at sea.

On a boat to Italy w/ 234 other refugees and migrants. Their strength is unbelievable. #ShareHumanity -@ThairDamascus pic.twitter.com/YUe47RMHMG

There were elderly, pregnant women and small children on the trip.

Some of them, including Orfahli had to sleep on the deck. The nights were freezing and the waves of water that splashed onto them made it even worse.

As the days went on, the passengers became more and more anxious. They wondered whether they would make it to shore at all.

Finally, it happened. Their ship made it to the shores of Sicily.

"My dad went to pick him up and everybody was so happy," she says. "Even my dad, I remember that he told me, 'Sara, I'm amazed to see this guy because he really has nothing on him, just his little phone and he has holes in his shoes but he's so happy. I don't get it.' And I'm like, 'Yeah, papa, he's happy because he's alive. He's grateful to life.'"

Grateful as he was, he didn't stay in Italy for long. He had more borders to cross. He wanted to get to Germany.

And that's where he is today. He has applied for asylum and is waiting to hear back. As for his family, Orfahli says they're scattered all over the Middle East. One of his siblings is in Saudi Arabia, others are in Jordan, Turkey and Lebanon.

After a long & dangerous trip I arrive in #Munich, the entry point for many migrants. #ShareHumanity -@ThairDamascus pic.twitter.com/0W7N9lxaK7

These days, he's at a refugee camp in Germany. He spends his time studying English and German.

For Orfahli, now, it's all about building a new life in the place he now calls home.