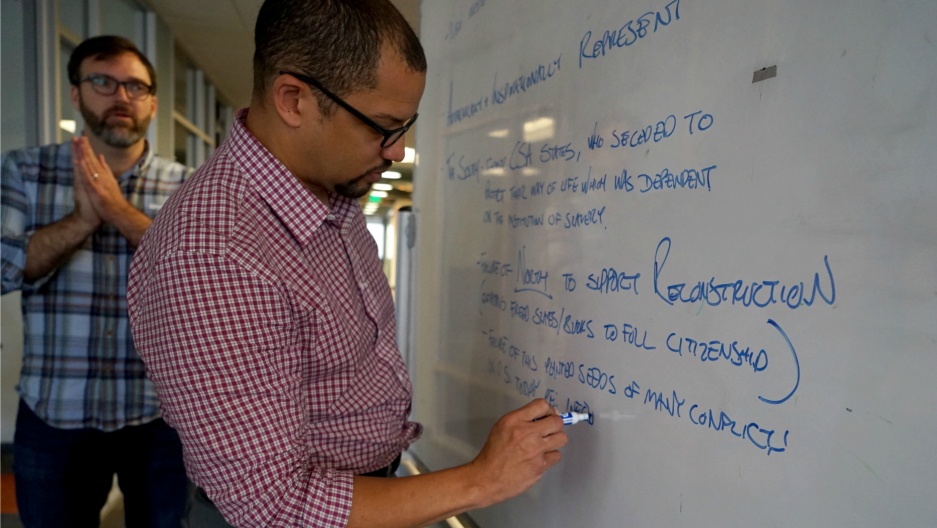 At Studio 360, we've redesigned all sorts of things --- big concepts like Mondaysor Canada, and simple objects like the board game Monopoly. Our latest experiment is to come up with a new symbol for the Southto replacethe Confederate battle flag.

This week we've got an update from the two senior designers from 70kft. Gus Granger is a founding principal of the firm. He's Minnesota-born and African-American, with family ties to the Civil Rights Movement. Stefan Reddick, the agency's creative director, is a white Georgian whose family history in that state goes back generations. They shared someexcerpts of their initial discussions of the design project.

Thoughts on the Confederate Flag

Granger: Robert E. Lee's message to Southerners after the Civil war was "to put the flag way," and if he's the standard with which Southerners align their Southern pride, then it's time to heed his words.

Reddick: Regarding our heritage, if we align with the tenets of our esteemed military leaders [Lee], we follow the example of his grace in defeat. It's grace on both sides that leads to healing and progress.

Granger: Our Southern agency believes designing a symbol that stems from years of deep-rooted controversy must be approached with care.

If we can't move beyond 150 years ago, we miss all the progress many Southerners made through sacrifice since. What about the non-violent protests of the Civil Rights Movement, the World War II vets who fought overseas for rights they didn't have back home, the Southerners who died in Charleston for welcoming a kid into their worship and the families who continue to forgive him?

Reddick: If this symbol continues to act as a symbol of terror, it runs counter to the values many Southerners attach to it. Because of this, it should be put away.

As a Southerner, with whom do I align? The racist kid who murders churchgoers and poses with the Confederate flag, or the parishioners who welcomed in a stranger to their church? Ten times out of ten, I side with the worshippers. That's being Southern.

Reddick: The South is much more than our antebellum characterization. We need an identity that reflects that.

Granger: We're still fighting over a symbol; let's put down our arms and show what moving on looks like. We must start by defining the unified South; a growing, positive South.

Reddick: We choose to be optimistic about the future while remembering our heritage. Our past doesn't have to dictate our future.

To close the wounds, you have to get stitches. Sure, there will be a scar there as a remembrance, but healing begins with closing the wounds. Wounds of white supremacy, wounds of hate, wounds of poverty, wounds of loss. It starts with forgiveness and putting others before yourself.

We'll be posting weekly updates from the 70kft team --- check our blogfor the most recent posts.