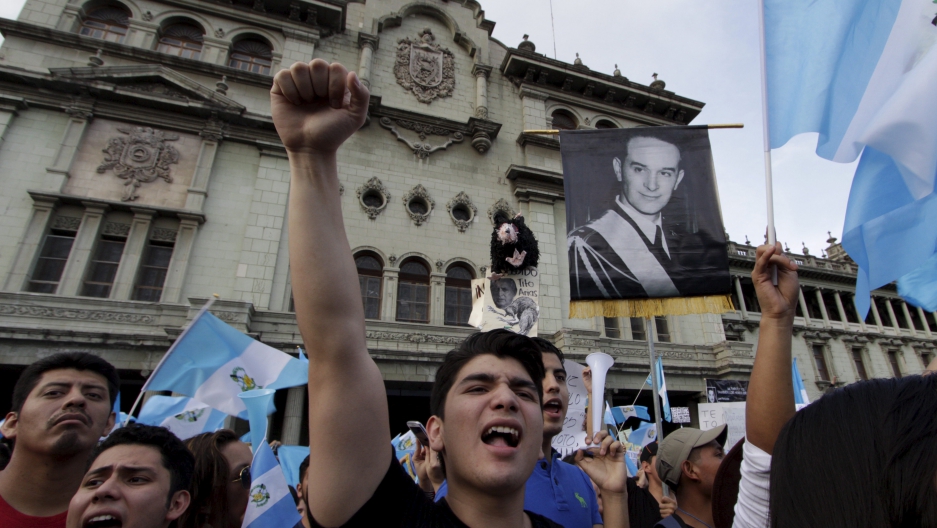 Demonstrators shout as they hold Guatemalan national flags and a picture of former Guatemalan President Jacobo Arbenz, during a protest against Guatemala's President Otto Perez in Guatemala City, Guatemala, August 22, 2015.

Since April, thousands have packed Constitution Square in Guatemala City each week to protest alleged corruption in the government.

Young members of Guatemala City's middle class organizes the protests through Twitter and Facebook, says BBC Mundo's Arturo Wallace. But a broad cross-section of the city turned out — not just the students who often protest. Who didn't protest? Rural residents.

"President Molina actually asked for peasants and indigenous people to revolt and protest in his favor," says Wallace.

But this doesn't mean it's entirely an urban/rural split. Or that only a small cross-section of people from Guatemalan society are upset about corruption in politics and business in the country. Wallace spoke with Marco Werman to help explain what the protesters are hoping to accomplish by taking to the streets. Here's a primer on how Guatemala got here.

Q. What do the protesters want?
President Otto Perez Molina to resign.

Q. Will he? And why does that name sound familiar?
You know Molina because he called for the legalization of drugs, saying the "War on Drugs" was a complete failure. But he hasn't made good on that plan. The drug war continues. As to him sending in his resignation? It’s highly unlikely, according to Wallace. A new presidential election will be held next month. His term ends this January. Chances are good he'll ride it out. "But by going against President Perez Molina and his party, the protesters might weaken the possibility of having his chosen replacement," says Wallace.

Q. Why did they start protesting in the first place?
It started last April, largely due to an investigation from the International Commission Against Impunity in Guatemala. Think FBI. "The commission discovered, and dismantled, a corruption network that was accepting bribes from Guatemalan businessmen to avoid paying import duties," says Wallace.

Q. So is this the Guatemalan version of the Arab Spring, right?
No. Wallace thinks the comparison is far-fetched. For one, Guatemala is already a democracy and Molina was democratically elected. "It's certainly important in Guatemala and it marks the resurgence of a civil society protesting," he says. "These are the biggest protests in the last 30 years in Guatemala. So it is a big thing. It is a reawakening of the civic spirit. ... There are certain similar aspects but I think it would be too ambitious to expect that this might result in huge political change within the region.”