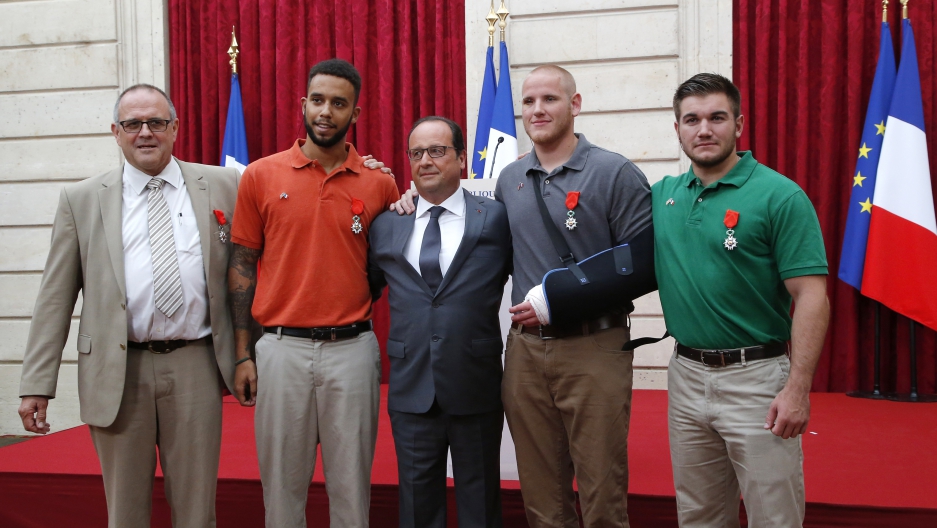 Spencer Stone, an off-duty US Air Force airman and marshal arts fan, was travelling with two of his childhood friends — student Anthony Sadler and US National Guard soldier Alek Skarlatos — when they saw a shirt-less man carrying an AK-47. Rather than run, the trio jumped into action.

Fortunately for them, the gun was jammed, which gave them time to tackle the man, who kept pulling out more weapons. He pulled out a handgun and then a box cutter. Luckily, the men managed to overpower the gunman, aided by Chris Norman, 61, a British consultant, and an unidentified off-duty French train driver.

During a press conference, Sadler, a 23-year-old student of Sacramento State University, said things might have been very different had the men not acted.

But security expert Juliette Kayyem says every situation is unique.

"It's not true that in every instance heroism is going after the terrorist," she says. "Most of the training today is for the public to run."

That, she says, wasn't an option for passengers on the train. But Kayyem says the best response would be to provide more training to the train staff on how to react in situations like this. For example, she says, they should have stopped the train sooner.

But Kayyem doesn't dismiss public involvement altogether. In fact, she says, getting people involved in their own security is crucial.

"Empowering people to take their own security into their own hands is a good thing to minimize the risk for them, but also to engage them in something that can seem quite scary — like terrorism," she says.

She urges people to be alert to their surroundings and to report any suspicious activity. She points to the "see something, say something" campaign.

Overall, Kayyem says, there is no single and universal way to combat terrorism, but a combination of training, surveillance and citizen engagement, she says, would help.