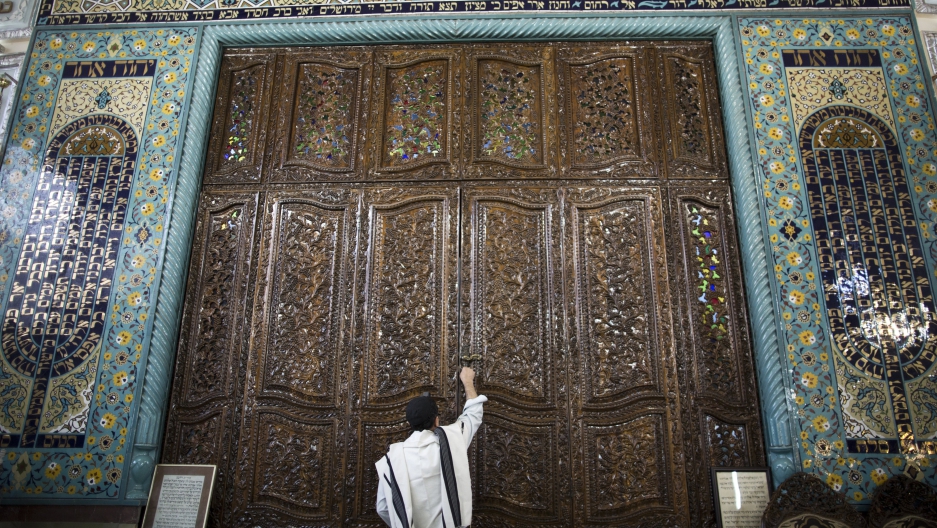 Iranian Jewish Es'hagh Akhamzadeh locks the door housing the Torah scroll after placing it in inside the designated cupboard during morning prayers at Youssef Abad synagogue in Tehran on Sept. 30, 2013.
Credit: BEHROUZ MEHRI
Share

Two prominent right-wing websites took aim at my GlobalPost article showing that Iranian Jews support the nuclear agreement with Iran and disagree with the views of Israeli Prime Minister Benjamin Netanyahu. A blogger for the "Committee for Accuracy in Middle East Reporting in America," also known as CAMERA, wrote, "By uncritically relaying comments of a people under surveillance and failing to fully note the threats they face, the article misleads readers."

A blogger at Breitbart.com, another conservative website, called my reporting "dubious" before launching into a personal attack on my work as a journalist.

While full of bilious rhetoric, at no time did either blogger disprove my main point: Most Iranian Jews support the agreement and disagree with the aggressive stand of Netanyahu. I'll get to their specific errors in a moment, but first some historical context.

For many years the right wing in the US has flexed its muscles in support of right-wing Israeli government policies. But they've faced big setbacks recently. The Israel lobby, headed by the America Israel Public Affairs Committee (AIPAC), strongly supported bombing Syria after the use of chemical weapons in 2013. American popular opinion overwhelmingly opposed US involvement in yet another Mideast war, and the Obama administration backed down. AIPAC lost.

More from GlobalPost: In Iran, ‘death to America’ doesn’t mean what you think it means

Now the lobby, with the backing of the Israeli government, is fighting ferociously to block the nuclear agreement negotiated in Vienna last month. Looks like they'll lose that one as well.

And then this guy (me) comes along writing that Iranian Jews — yes, Jews! — also want to see reduced tension between the US and Iran. Even worse, the article was reprinted by USA Today, the country's largest-circulation newspaper with a major online readership, too.

Both critics waged attacks on me while ignoring the reality in Iran as presented by myself and other Western reporters.

Now to the specifics. I'll summarize the bloggers’ main objections to my article before responding.

1. Both bloggers argue that since Iranian Jews are repressed by the government, they can't possibly express their real views. Iranian Jewish religious leaders take part in a ceremony marking the 34th anniversary of the return from exile of the founder of Iran's Islamic Republic, Ayatollah Ruhollah Khomeini, on Jan. 31, 2013 at Khomeini's mausoleum in Tehran.

Iranian Jews, indeed all Iranians, certainly face government repression. Holding an anti-government rally, or even posting regime criticisms on social media, can land you in jail. Conditions were worse under President Mahmoud Ahmadinejad; they are relatively better under President Hassan Rouhani. However, Iran remains a repressive, theocratic state.

But that doesn't mean everyone there lies to reporters. I've been reporting from Iran since 2001 and working in the Middle East since 1986. I've had experience telling the difference between someone parroting a government line and expressing a personal opinion. Those who fear repression will most often refuse to be interviewed. I met others who spoke very cautiously. I met people who spoke freely and critically of Iranian policies.

And, yes, I met Iranians who genuinely agreed with their government.

Larry Cohler Esses, an editor from the Jewish publication Forward, visited Iran at the same time as I. He was also able to interview random people and get honest opinions from Iranian Jews.

2. The bloggers say I fail to describe the larger context, looking into why so many Jews have left Iran. There is an interesting story to be written about why so many Iranian Jews have emigrated. But this story was about the views of those who remained. Just because Iranian Jews have suffered at the hands of the government doesn't mean they favor policies that could lead to bombing their country.

I mentioned that the 1979 population of over 100,000 Jews in Iran had shrunk to under 30,000 today. There are conflicting figures on the number of Jews in Iran today, and I got varying estimates from Jewish leaders. That's what I reported.

For context, I included examples of institutional discrimination inherent in having a theocratic state and examples of anti-Semitism protested by the Jewish community. I don't think a reasonable reader could come away thinking Iranian Jews live some kind of idyllic life.

Jason Rezaian, Washington Post correspondent in Tehran, took a similar approach is his 2013 story about Iranian Jews. Rezaian was later arrested by Iranian authorities and is being held in prison in violation of his human rights and international law. No one has suggested that his arrest was connected to his coverage of Jews.

3. The bloggers claim my article relies on three sources and can't possibly represent the views of Iranian Jews.

I only cited three sources in my relatively short article, but they represented the viewpoints expressed by others. During my nine days in Iran I interviewed over two dozen Jews and Muslims. I stopped people at random in various parts of Tehran. Almost all agreed to be interviewed. A significant number expressed support for the nuclear agreement. An opinion poll showed 57 percent of Iranians support the deal. The poll was conducted for the University of Maryland's Center for International and Security Studies at Maryland.

While I know of no surveys specifically polling Iranian Jews, based on my and other reporters' interviews, it's likely they support the accords by at least the same margin.

4. I'm charged with being an "apologist" for Iran. I'm compared to journalists who were duped to write lies favorable to the USSR or the People's Republic of China.

I am no apologist — either for the government in Tehran or in Washington.

The bloggers obviously haven't done their homework. I wrote a book called "The Iran Agenda," which sharply criticizes the Iranian political and economic system, as well as US policy toward Iran. I covered the 2009 Iranian presidential election and the subsequent eruption of mass protests. In articles and media interviews, I detailed horrific government repression.

I am no apologist — either for the government in Tehran or in Washington.

5. Ad hominem attacks are meant to discredit my reporting and to cast doubt on my allegiance to the truth.

The Breitbart.com blogger wrote: "The reporter has in the past revealed himself as an apologist for the Iranian regime; has shown anti-Israel bias in his reporting; has written in anti-Israel publications, and he even had noted anti-Semite, Noam Chomsky, write the foreword for his most recent book."

I thought this kind of smear went out of style in the 1950s. Note the lack of links or references of any kind. My reporting on Iran, Israel and the Middle East has been balanced and truthful. The blogger just doesn't like facts that contradict his views.

More from GlobalPost: Why Iran's Kurds don't want US sanctions to end

I have no idea what "anti-Israel publications" to which he is referring. Perhaps he means Moment Magazine, Hadassah Magazine and other publications in which I wrote extensively about Portuguese holocaust hero Aristides de Sousa Mendes? Or perhaps it was my writing about the hidden Jews of Portugal for the Christian Science Monitor? Or my many years of reporting for NPR, CBC (Canada), ABC (Australia) and CBS Radio?

As for Noam Chomsky, he is no anti-Semite. He advocates a two-state solution for Israelis and Palestinians. I'm proud that he wrote the introduction to my recent book "Inside Syria." And in another failure of right-wing research, the bloggers forgot to mention he also wrote an afterword to my previous book, "Conversations with Terrorists."

Special Correspondent Reese Erlich has reported for GlobalPost from throughout the Middle East and Latin America. His Iran reporting was supported by a grant from the Pulitzer Center on Crisis Reporting. His latest book is "Inside Syria: The Back Story of Their Civil War and What The World Can Expect."