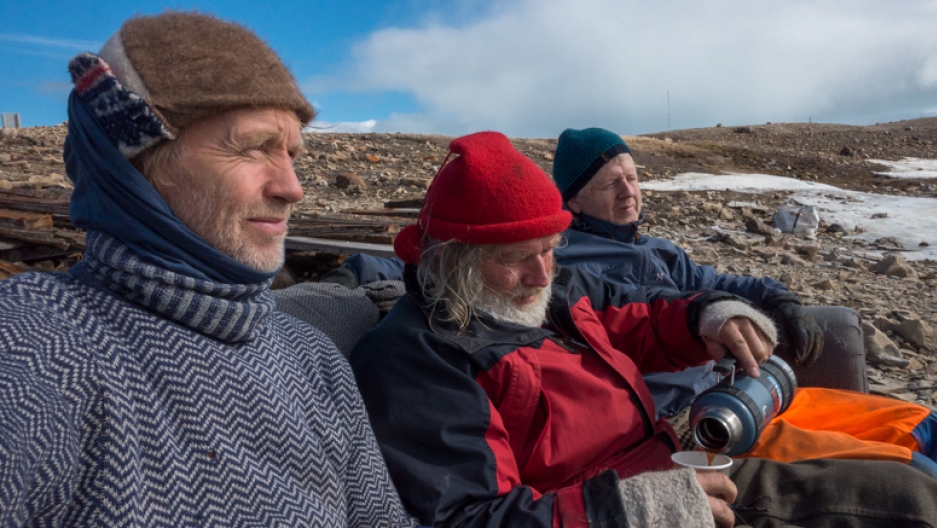 Even during an era of great explorers tackling the nigh impossible, the Norwegian seaman Roald Amundsen was sui generis: He discovered the fabled Northwest Passage through Canada; he led the first crew to reach the South Pole, and was the first explorer to successfully reach both poles.

However, Amundsen went bankrupt and died a broken man, on a rescue mission searching for the crew of an airship stranded in the Arctic. His plane — and his body — were never found.

Finally, after more than 80 years, one of his most famous ships, Maud, may now be coming home.

It’s a task worthy of Amundsen himself — persuading the Canadian government to relinquish a legendary shipwreck. On top of the politics, the technical hurdles are high, too. It involves using a never-before-attempted method of raising the hull from an Arctic seabed, then towing it all the way back to Norway.

The Norwegian company Tandberg, which decided to bring Maud home, found the right man for the job: Jan Wanggaard, artist, world-champion windsurfer and builder of Viking ships, among other things.

But when Wanggaard petitioned the Canadian government to release Maud, it turned him down. But hey, Amundsen didn’t reach the South Pole on his first attempt either.

Wanggaard persisted, arguing the ship was of intrinsic significance to Norway’s heritage. Maud was built by Amundsen himself, who Norwegians consider a kind of a “super hero,” Wanggaard says.

In the end, the Canadian government relented and ruled in Wanggaard’s favor. But now, he has to raise a wrecked ship, weighing hundreds of tons, from its shallow resting place about a half mile outside the Arctic settlement of Cambridge Bay in Nunavut.

It’s so remote, Wanggaard says, “you feel like if you look far in the distance, you can see the North Pole” — though it’s more than 1,000 miles away.

He’s been trying to raise Maud for three years now, a task complicated by the short summer season. This year, when his crew arrived in June, “Maud was completely closed in the ice and we started to dive as soon as the ice started to open.” 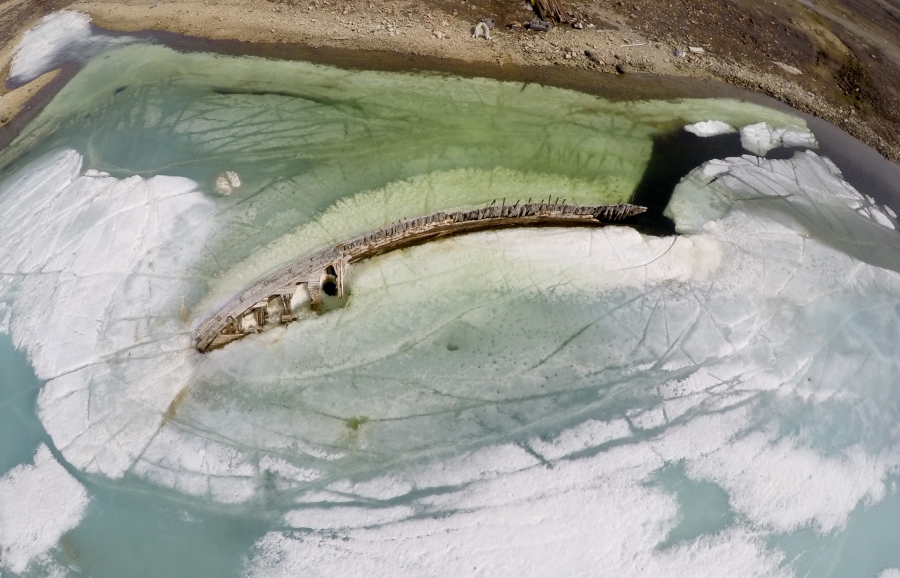 Come September, that ice will start to close back in. But Wanggaard believes they are in the final stretch and that soon Maud will rise again — with the help of five guys and some really big balloons.

“It's a very slow process because the balloons are really big and we have to attach them in a way so the Maud can be lifted in a safe way,” he says.

Given the complexity of the task, Wanggaard says he wasn’t given a fixed budget — or deadline — to bring the ship home. And not everyone is in a hurry to see Maud leave. The citizens of Cambridge Bay have been gazing at its skeletal outline across the water for decades. 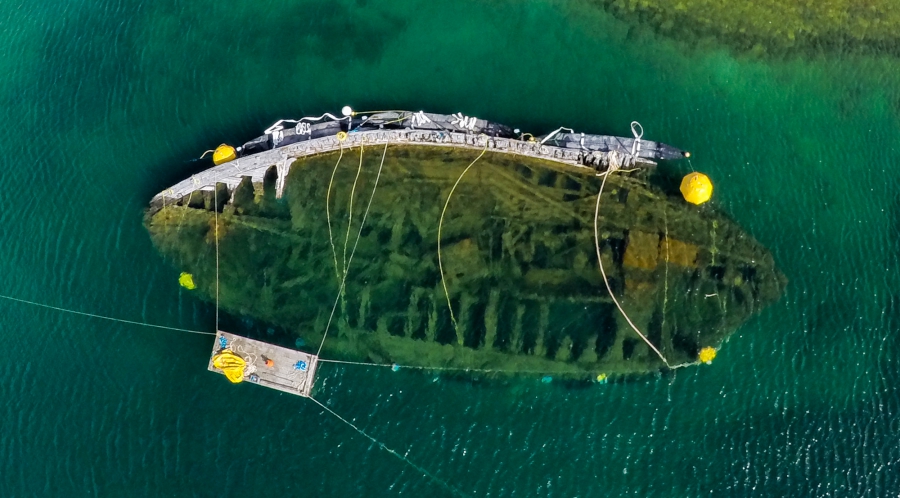 A bird's-eye view of Maud

“There’s nowhere else you can really go and just see a piece of history standing out like that,” says Zachary Townsend, a college student whose parents live in Cambridge Bay.

Cruise ships have made Maud a tourist pit stop, but it's more than a landmark. The ship helped build the town — literally.

“There’s no real trees or any source of wood up here, so what a lot of the locals did when they were building the town, is they actually took pieces from the boat itself and used that to build their houses,” Townsend says.

Looking at it that way, I guess Maud will never really leave Cambridge Bay.

And Wanggaard says he understands where the locals are coming from: he feels a connection with Maud too.

“When I saw the ship the first time ... it was very emotional,” he says. “OK — this is the ship and this is what we're going to bring home.”

This reverence is ironic, because Maud was considered a failure during Amundsen’s time. He spent seven years trying to reach the North Pole in the ship, but he went bankrupt and Maud was seized by creditors. It was only years later that his team was recognized for the scientific research accomplished during those years crisscrossing the Arctic. Maud, in the meantime, was sold to Hudson's Bay Company and used as a floating warehouse until it sank, in 1930. 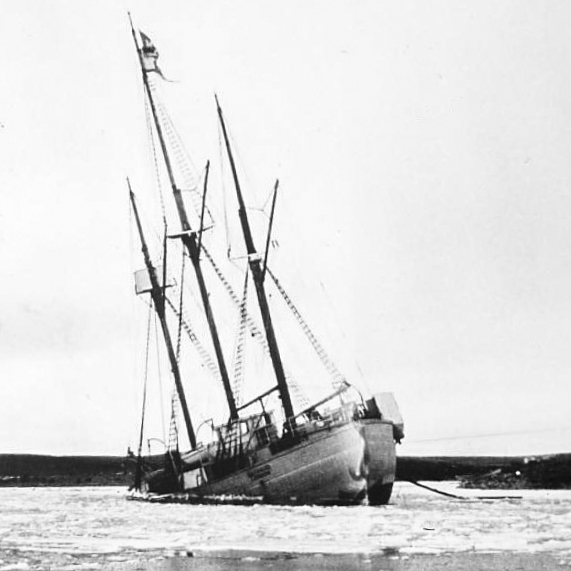 Tandberg now plans to build a “futuristic” museum back in Vollen devoted to the returning the ship. But first Maud must be lifted from the sea bed. The big question is when.

“People ask ‘Is it happening tomorrow? Or after tomorrow?’” Wanggaard says. He tells them, “it’s happening in the timespan between now and [when] the ice arrives."

But what if they can’t beat the ice, I ask, or their balloons just aren’t strong enough to, you know, float the boat?

An answer Amundsen definitely would approve of.