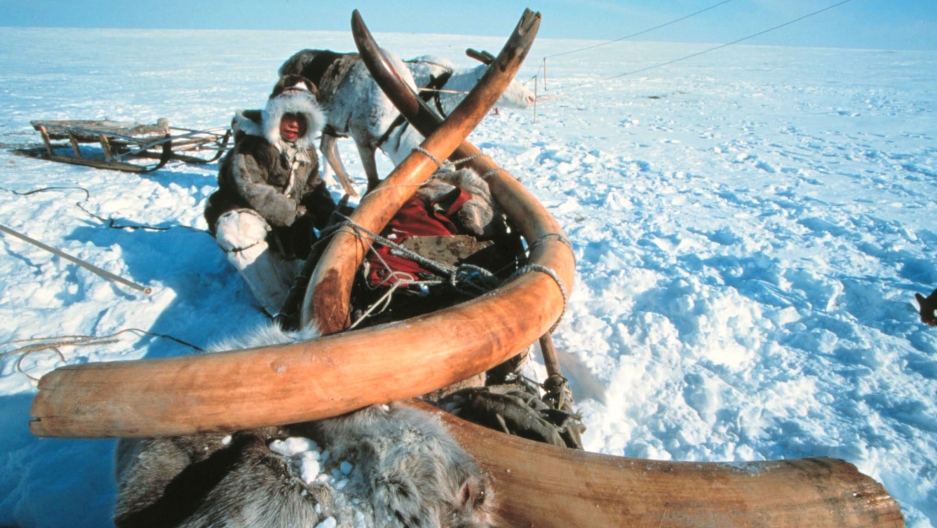 Selling elephant ivory is illegal around the world thanks to tough regulations like the Convention on Trade in Endangered Species. But despite the international ban, elephant poaching continues in Africa and ivory carvings made from elephant tusks fetch high prices in China.

So, as anti-ivory enforcement efforts and education campaigns impact supplies of elephant ivory, some traders are turning instead to ivory recovered from woolly mammoths. Their tusks have been preserved in the frozen tundra of Northern Siberia for thousands of years. Some have called the booming trade in these tusks the new "ivory rush."

“This is due to a combination of factors: One is simply the cost that ivory is fetching and the fact that even this 20,000- to 30,000-year-old ivory from the perma-frost  is in almost as good a condition as the ivory of modern day elephants," says Dan Fisher, a palaeontologist at the Museum of Palaeontology at the University of Michigan.

High prices are driving ivory traders into the remote regions of Siberia to collect whatever they can, he adds. But their efforts are much easier now than they might have been dozens of years ago for one reason: global warming. “There's especially accentuated climate change going on in the Arctic," says Fisher, who’s been carrying out field research in Siberia for the past 15 years. "The melting seasons are much longer, and more vigorous, and more specimens are coming to the surface. ... We prospect hill slopes, riverbanks, along the coastline, wherever there is erosion.”

It’s estimated that more than 90 percent of mammoth ivory comes from Siberia, and that half of the world's exports of mammoth tusks are from Russia to Hong Kong. The ivory is used by artisans there to craft pieces of ivory jewelry and trinkets. Sometimes entire tusks are ornamentally carved with intricate scenes and animal figures.

Aside from plundering scientific excavation sites and Siberia’s natural history, there’s nothing especially illegal about traders acquiring or selling mammoth ivory. But there's still a problem. New evidence has emerged that some Chinese ivory traders are passing off illegal elephant tusks as mammoth ivory, to evade CITES export controls and thus profit from the sale of elephant ivory. And that poses yet another threat to already-threatened elephants populations.

This all scientists and conservationists scrambling to find ways to track or regulate the commercial sale of mammoth ivory. One idea that’s been proposed is to list the woolly mammoth as an endangered species under CITES.  “There’s an argument to be had that the trade in mammoth ivory should be banned,” says professor Adrian Lister, a palaeontologist at the Natural History Museum in London. “If we want to shut the door on the poaching of elephants it may be necessary to shut down the trade in mammoth tusks, as it keeps up the demand for ivory.

But can you simply add an extinct species to an endangered species list? The conservation issues that arise in the case of elephants and woolly mammoths are quite different, says Fisher.

“There's no question there is some interaction between the two and a need to understand the similarities and the differences and to develop a way of managing each of these for its own purposes," he says. "Elephant populations need to be protected, but equally our knowledge of mammoths and their history, that is, our scientific access to some of that material is something that's worth concerning ourselves with as well.”

For the near future, at least, woolly mammoths will likely not come under CITES protections, as it would unduly restrict scientific researchers and natural history museums. But Fisher says the global trade in mammoth ivory should definitely be on the radar of people who are enforcing the international ban on trade in endangered species.