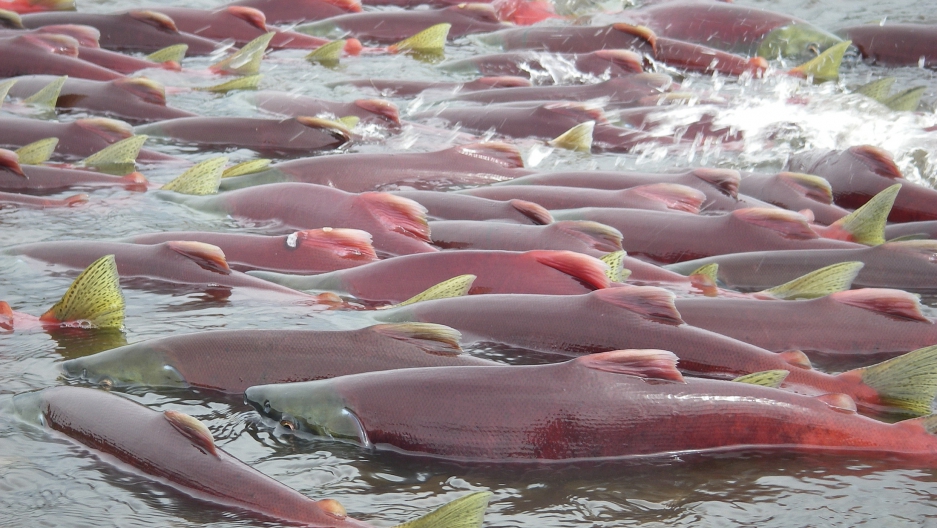 Salmon accounts for 75 percent of the southeat Alaska's seafood economy.

Summer in southeast Alaska is salmon season. As the days grow long, the iconic pink fish begin to run up rivers and streams, and the fishing economy jumps to life. But this summer, fishermen are worried that new mining development could put their livelihoods at risk.

Alaska produces more than 50 percent of US seafood, a success cultivated by careful regulation. “Alaska is the jewel of the world when it comes to fisheries management,” says Mike Erikson, the CEO of a small seafood processing plant in Juneau called Alaska Glacier Seafoods, “and that’s because you don’t see dams on our rivers you don’t see a lot of development in these watersheds that will have a negative impact.”

Salmon is the dominant fish on the menu in southeast Alaska, accounting for 75 percent of the region’s seafood economy. Five different salmon species — Chum, Pinks, Coho, Sockeye and Kings — swim up rivers here to spawn. The salmon life cycle is a well-documented natural wonder. Somehow, each fish manages to find its way back from the open ocean to a little freshwater stream where it was born. But last summer the salmon cycle was disrupted on one of the biggest sockeye rivers in North America.

On August 12, 2014, a dam holding back wastewater from the Mt. Polley copper and gold mine in British Columbia burst, sending more than six billion gallons of polluted water and mine waste into the Fraser River, just as the fish had begun their journey upstream.

It’s still too early to know how the Mt. Polley spill will impact the salmon runs on the Fraser, but some fishermen see the Mt. Polley disaster as the first shot in a growing conflict between Canadian mining businesses and the Alaskan salmon industry. British Columbia is in the midst of a mining boom, and several BC metal mines are planned along rivers that ultimately flow into Southeast Alaska — rivers like the Unuk, the Taku, and the Stikine. All of the mines would create massive amounts of toxic mining waste that will need to be stored and kept out of rivers.

“[The mines] are all in very close proximity to major salmon streams and they are in remote very geologically unstable, wet environments,” says Chris Zimmer of the conservation organization Rivers Without Borders. Zimmer says that the accident at Mt. Polley shows that mining companies don’t have the technology to mine safely in sensitive ecosystems like wild rivers.

Many fisherman agree. “Mining on a salmon river, I’ve never seen an example where it worked to the benefit of salmon,” says Len Peterson a fisherman based out of Juneau.

Many of the proposed mines are in early development and still need investment, but the Red Chris copper and gold mine opened this summer. Owned by Imperial Metals, which also owns the Mt. Polley mine, Red Chris is located along a tributary of the Stikine River, about 70 miles from the Alaskan border. BC minister of mines Bill Bennett has maintained there will be no problems containing the wastewater from Red Chris, but some Alaskans downstream aren’t convinced.

“It’s all part of this watershed,” says Angie Eldred of the Southeast Alaska Watershed Coalition. “If anything were to go wrong or there were to be a water quality impact, it’s going to wash downstream and impact all of our resources ... on this side of the border.”

That’s a concern for many people in the town of Wrangell, Alaska, a few miles from the mouth of the Stikine, people like tour-boat operator Brenda Schwartz-Yaeger. Part of the town’s small but growing tourist economy, Schwartz-Yaeger takes visitors upriver to see the bald eagles, grizzly bear, and wild glacial landscape of the lower Stikine.

“Wrangell wouldn’t be here today or earlier if it wasn’t for the bounty of the river,” she says. “I mean the natives came and settled this area because it was so rich and bountiful.” And native Alaskans in Wrangell today still depend on the Stikine’s bounty.

“Each year I go up there and get sockeye and put that up for the winter,” says Einar Haasath, a member of the Tlingit tribe, one of the largest in southeast Alaska. Einar mostly fishes for subsistence, but commercial fishing is the biggest industry in Wrangell, and residents fear that the Red Chris mine could threaten the river at the center of the town’s fishing economy.

“If you lost the fishing industry you wouldn’t have anything,” Haasath says. “[Wrangell] would be a ghost town.” On August 2, about 100 Wrangell residents marched through town to protest mining development on the Stikine.

The Alaska state government has communicated extensively with British Columbia about the new mines, and so far state officials have said they trust British Columbia’s mine permitting process.

“Our laws are very comparable, our standards for the mining industry are extremely comparable. We go about the business of evaluating mining proposals ... in pretty much the same way,” says Kyle Mosele of the Alaska Department of Natural Resources. But a coalition of fisherman, conservationists, and native Alaskans is demanding a stricter environmental review of new Canadian mines like Red Chris, and they want the US State Department to get involved.

“What we need is a better mechanism to get Alaska’s concerns on the table, says Zimmer, “and that’s probably something through the Boundary Waters Treaty, which was signed by both countries and says very clearly and simply, you cannot pollute the waters which flow between both countries.” So far, the State Department has said that it sees this as a local issue, but Zimmer and other activists says that they are going to keep pushing to get standards in place that will protect Alaska’s downstream interests.

“I think there is some momentum here from the levels of concern with Mt. Polley. So I think now is the chance. We have BC’s attention and if we wait much longer a lot of these mines are going to get built,” he says.

Alaskans are used to the careful balancing act of managing different natural resources. Over the years the state has seen conflicts over the impacts of timber, oil and mineral extraction. But salmon advocates argue that fish are different — they’re a renewable resource. If you regulate the fishery and keep their habitat healthy, the sockeye, humpies and kings will keep coming back to the rivers and streams of Southeast Alaska every summer.

Climate change and ocean acidification are changing that equation, but in the short term those who depend on the salmon argue that the best way to help them is to keep the rivers running clean and free.

“The river is really important, says Haasath about his Stikine River, “and I would hate to see anything happen to it. People talk about industry and that sort of thing. Well, industry comes and goes, but a river, by golly, once you destroy it its gone. You can’t bring it back.”