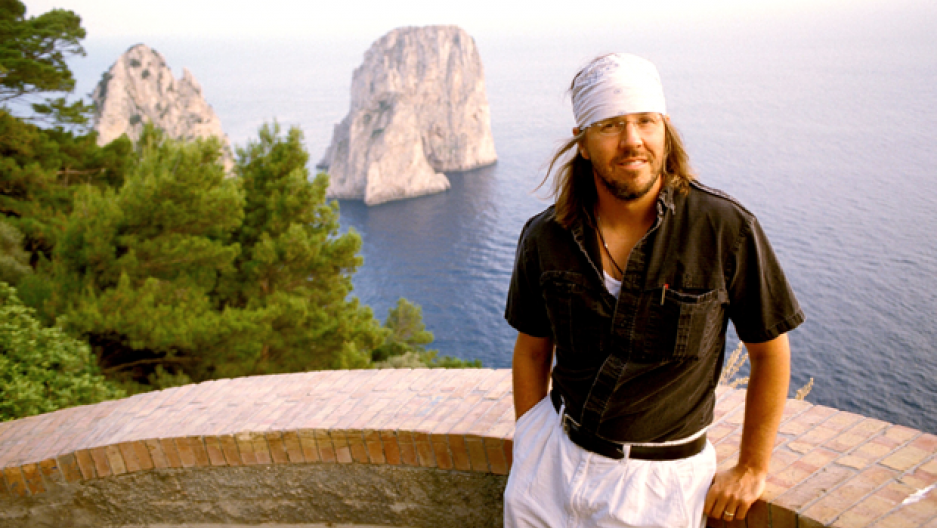 The novelist David Foster Wallace, the subject of a new film and a remembrace by his kid sister, who says "I can still hear his voice in my head."

Editor's Note: She didn't care whether the novelist David Foster Wallace got famous. Twenty years ago, she didn't get all gaspy when he delivered his delightful doorstop of a masterpiece, "Infinite Jest," which hooked readers from its first, 11-word sentence: “I am seated in an office, surrounded by heads and bodies.”

To Amy Wallace-Havens, he was just her big brother.

Below, her remembrance of Wallace, from excerpts of her conversation with Anne Strainchamps, a year after Wallace's suicide, at age 46.

He would never use an ATM machine because he didn't get it...

He was probably the best listener I have ever met in my life. He loved to sit down and talk to people, about anything...

He was sort of benevolently sadistic, if that makes any sense at all. He enjoyed figuratively pulling my wings off, and then watching what happened. He knew every button to push to make me hysterical.

He was two years older, and that much smarter, and he was always bigger than I was. Probably the funniest thing that he did when he was a kid: During the long, gray, boring winters, when there wasn't that much to do, once in a while he would decide that that day he wasn't going to be David, he was going to be Captain Phlegm and his sidekick, Goat Bile, and he would be both of them at once.

And I don't really remember what their purpose was, or if they had superpowers, or what they actually did, but I can still shudder to think that I used to beg my brother to let me be Goat Bile on a Sunday afternoon. And I wasn't worthy. He would do them both himself...

He had left for college and he came back his sophomore year in the middle of the year, unexpectedly. And this just stunned all of us. We had no idea what he was going through and what he was struggling with. It was a very memorable and difficult time ... He'd always been big and strong and he could do anything.

And I do remember when he came back from Amherst in the middle of the year. We would sit in his bedroom when I got home from school ... and he would just talk about loneliness and wondering how people get up every day and function. At the time, I think I was working at Baskin-Robbins, and he said, 'How do you do that? When somebody comes in the store and asks for an ice cream, how do you do that and not run out the back door?'

It was very frightening to think that the depression could be so incredibly powerful, and then it took a while, but he had therapy and medication, and got markedly better.

He definitely found the person for him in Karen [painter Karen L. Green, whom he married in 2004]. She got him on every level ... It was nice to see him so happy .... He spent most of his life really not feeling like a grown up, and marrying Karen soothed that element of him ...

The year before his suicide

He was very brave. And he really did try so hard. When he did die, there was not a minute that I thought that I was angry at him, or that if he only tried harder. I knew how hard he tried.

Sometime in the 80s, we drove cross country together. I was in school at Virginia at the time, and he was moving back to Tucson, and his radio was awful; it was an AM radio. And so we had this boombox with tapes in it, and we ran out of batteries at one point, and we were in Texas.

And David didn't want to stop, because we had to go at least 200 more miles before we could have dinner or whatever, you know, this fabulous prize at the end there, and buy batteries. So he was going to teach me to sing harmony, and I didn't want to learn how to sing harmony. So were stuck in this tiny Volkswagen Rabbit, in Texas, as the sun was setting...

David had a wonderful singing voice, he was actually in the glee club at Amherst, with Prince Albert of Monaco ... So we're driving along, and David says, 'No really, Amy, you can learn this and we can sing harmonies the entire trip'... This went on for 200 miles ... I grudgingly tried to reach the unlikely pitch he was expecting me to reach and sustain.

And he did, finally, thank God, give up on me ... I think he bought me a Hostess cupcake when we finally got the batteries, and apologized. But I just think about that; that's just kind of David in a nutshell ...

I will never, ever, regret having David as a brother. ... I can still hear his voice in my head ... He had a very distinctive soft, lovely voice.

This was adapted from this interview on PRI's To the Best of Our Knowledge, a nationally syndicated radio show that cracks open the world and the ideas that fuel its engine.

How David Foster Wallace found tranquility in the tax code