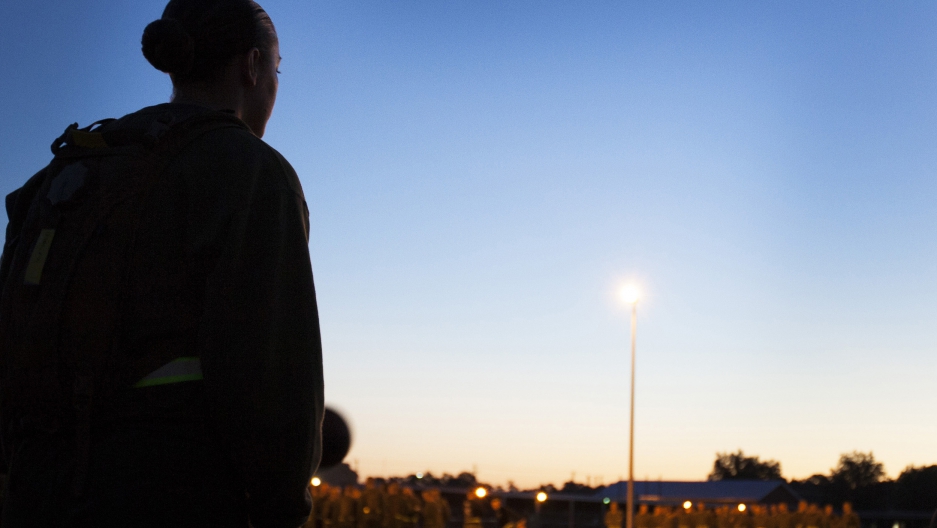 A female Marine goes through bootcamp in 2013.

By January 2016, all branches of the armed services will fully integrate men and women in combat roles. More than 230,000 women are currently being trained to be combat ready.

“Our purpose is to ensure that our mission is carried out by the best qualified and most capable service members, regardless of gender and regardless of creed and beliefs,” former Secretary of Defense Leon Panetta said in January 2013.

Since January 2013, when the Pentagon first moved to lift the ban on women in combat, the different services have had discretion over which positions to keep closed. The Air Force is the most integrated branch, with 99 percent of positions open to women. The Army has also been effective in integrating, opening more than 68,500 roles since January 2013. Meanwhile, the number for the Marine Corps is just 6,000.

Lt. Col. Kate Germano was a commanding officer of the Fourth Recruit Training Battalion at Marine Corps Recruit Depot at Parris Island, South Carolina. She believes passionately in equality between men and women in combat, making it a personal mission to improve the performance of female recruits in advance of the 2016 deadline for integration.

Female candidates were, she says performing far below their male counterparts across all disciplines. So she decided to work personally with recruits, to the point where she was accused by some of being overly blunt and aggressive. At the end of June, the commander of Parris Island Brig. Gen. Terry Williams removed her from command, saying he had lost "trust and confidence" in her ability to lead.

But Germano says she was working to improve the physical test results and tactical training of her recruits, just like any other leader in the Marines — male or female — would do.

"When I looked at the statistical data from the previous decade on how the female recruits had performed, what I found was on that on every instance, they had underperformed compared to their male counterparts," Germano says. "I believe that there was a specific group of Marines who were not receptive to change and who did not like my leadership style."

Germano argues that senior leaders were too willing to stand up for disgruntled female recruits, acting as their “protectors."

"I was told I was too aggressive, I was too blunt, I was too direct, and that I sounded pompous when I offered advice on recruiting, despite the fact that I had been there twice and was very successful," Germano says. "And I, in my career of 19 years, what I found was that my counterparts would not be told those things."

Without the issue being tackled head on, Germano worries that women would not realize their potential in combat positions.

“Unless we fix what's happening before they get into the training pipeline and improve their physical fitness and mental strength, we are going to struggle to get to a point where the data will say or show women are capable of filling these combat arms roles," she says.

Responding to Germano’s claim that she was punished for exhibiting leadership traits her male counterparts would not be punished for, Col. Jeffrey W. Fultz, chief of staff at Parris Island, says the firing was backed by an investigation.

“The investigation substantiated Lt. Col Germano abused her authority and lacked the ability to maintain the working relationships required to effectively lead,” Fultz says. “The decision to relieve a commander is never taken lightly but, in this case, it was deemed necessary.”

Fultz also noted that Germano’s Fourth Recruit Training Battalion is not part of the integration program.

Marine Corps spokesman Maj. Anton T. Semelroth says that the Corps will be ready for the 2016 integration.

"As we move forward with this process, our focus remains on combat readiness and generating combat-ready units while simultaneously allowing each Marine the opportunity to succeed; it's simply the right thing to do.  Our ongoing deliberate, measured and responsible approach will integrate female Marines in the ground combat element to the maximum extent possible."