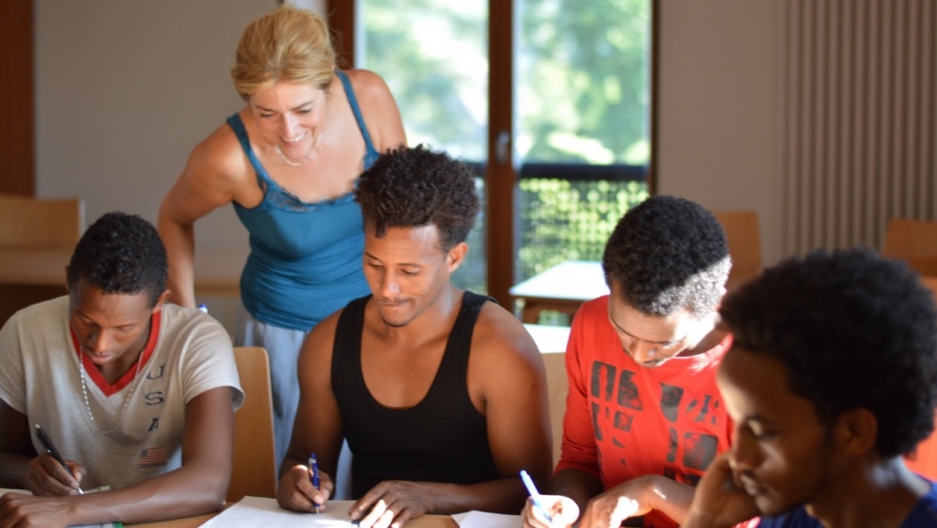 Local Miriam Scholz has volunteered to teach German to asylum-seekers like this group from Eritrea.
Credit: Zia Weise
Share

His journey led him through Macedonia, the Balkans and Austria to the German border, and finally, to a refugee shelter in the tranquil Bavarian town of Freyung — thousands of miles from his starting point.

He’s one of an astonishing 800,000 refugees and asylum-seekers coming to Germany this year — over twice as many as previously estimated and quadruple last year’s total.

“It will be the largest influx in the country’s postwar history.”

“It will be the largest influx in the country’s postwar history,” German Interior Minister Thomas de Maiziere said Wednesday.

But while leaders dig for solutions, migrants coming from some of the poorest or war-torn patches on the planet are proving to be a polarizing group for European societies. Often migrants are met with kind, welcoming locals, willing to help integrate the newcomers. Sometimes, their homes are burned down.

Basel, a 24-year-old who would give only his first name, is originally from Deir Ezzor in eastern Syria, which is one of the world’s bloodiest battle zones.

Walking around Freyung, Basel passes alpine-style huts, a ski lift and a health resort, all nestled between stretches of dark forest. “It’s so green,” he says. “Maybe I want to stay here all my life.”

For decades, little has changed in this town of 7,000 — until an old hospital was converted into a temporary home for hundreds of asylum-seekers last summer.

With arrivals surging and a housing shortage in larger cities, authorities began opening migrant reception centers in rural towns like Freyung. Here, municipal officials counted 500 refugees in July; the wider district, which borders both Austria and the Czech Republic, is now home to 1,000 of them.

The locals’ response mirrors a wider reaction across Germany: While most were welcoming, a vocal minority began to stir up hatred.

Shortly after the center’s opening, a far-right group in the district began publishing hateful posts on Facebook. “To Dachau with them. I’ll heat up the furnace,” read one, according to a local newspaper.

Elsewhere in Bavaria, refugee shelters went up in flames. Xenophobic arson attacks against homes for asylum-seekers have shaken Germany. The government recorded about 150 of them since January, most targeting newly built shelters and thus preventing the new arrivals from moving in.

The latest attack took place just a two hours’ drive from Freyung Thursday night, when arsonists set fire to an asylum-seekers’ shelter in Neustadt an der Waldnaab. It was home to 19 Azerbaijanis, including three children. Police reported no injuries, adding that “a xenophobic background cannot be ruled out” — a sentence that’s depressingly familiar to Germans this year. A house that was supposed to shelter asylum seekers in Remchingen, southern Germany, was burned down in July. The banner reads "Hirnverbrannt," literally meaning "burned brain," an expression for "stupid."

But local emotions about all the newcomers run a wide spectrum.

In a cafe in Freyung, a retiree named Elisabeth Schwarz watches a woman in a blue hijab pushing her stroller outside. A tall church dominates the central square; religious or ethnic diversity was unheard of here until last summer.

“They’re nice guys. We went bowling with the Eritreans.”

“I’d be worried if more of them arrived here,” Schwarz says.

Then, she adds: “But they’re nice guys. We went bowling with the Eritreans.”

She’s referring to a group of 24 young men from Eritrea, a country next to Ethiopia whose dictatorship often forces men into lengthy, sometimes indefinite military service, among other human rights violations. These Eritrean emigres have become part of Freyung’s community since they arrived in October. While they wait for their asylum applications to be processed, volunteers are integrating them into daily life — taking them to Christmas markets, painting their faces for carnival, and teaching them how to order a beer in German.

“Their first sentence was ‘a beer please,’” laughs Miriam Scholz, a primary school teacher who spends her spare time giving German lessons to the Eritreans. Thanks to her, they have already picked up the local dialect.

“We can only function because of the volunteers,” says Karl Matschiner of the local municipality. “There’s some 120 people helping. We’d be overwhelmed otherwise.”

Beyond the reports of arson and rising xenophobia, thousands like Scholz work quietly to welcome the new arrivals, distributing supplies, collecting clothes and food, and even offering their spare rooms to asylum-seekers. Anti-refugee protests are countered with solidarity marches.

Last week, a Bavarian bus driver greeted a group of foreigners through his intercom: “I want to say welcome. Welcome to Germany, welcome to my country.” He later said he had felt inspired to make the speech by his brother-in-law, a refugee who had fled the war in Kosovo.

In Freyung, 74-year-old Jannostik Dietmar likes to remind the townsfolk that they have a tradition of welcoming foreigners. His family settled here after fleeing Breslau in today’s Poland toward the end of World War II.

“They forget,” he says, “but many of us were refugees also.”