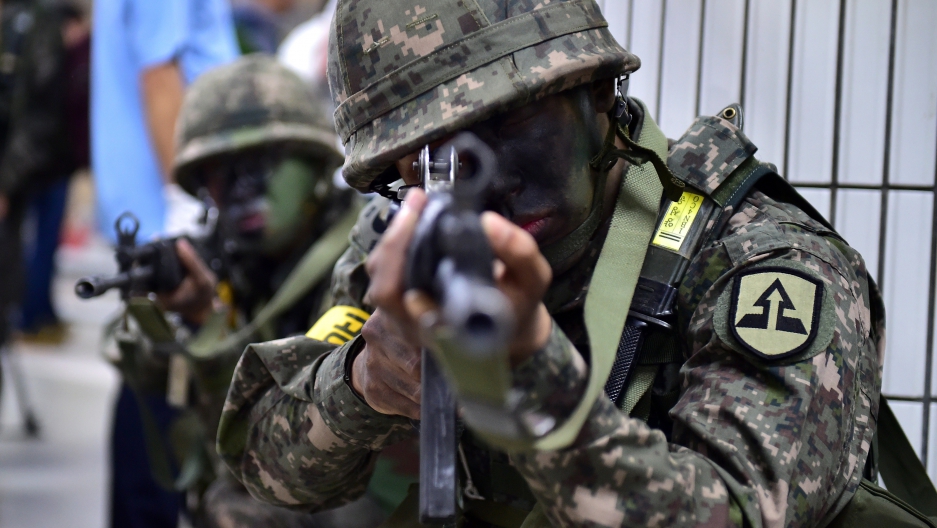 South Korean soldiers during an anti-terror drill on the sidelines of a joint military exercise with the US, at a subway station in Seoul on August 19, 2015.
Credit: JUNG YEON-JE
Share

It’s war, but only sort of. Kim Jong Un has declared North Korea in a “quasi-state of war” with — guess who — South Korea, after the two sides exchanged fire across their closely defended border.

Last night Kim warned that worse is to follow unless its noisy neighbor stops blasting anti-Pyongyang propaganda across the DMZ. If the broadcasts are still going in 48 hours’ time, he says, “indiscriminate strikes” against the South will ensue.

He’s said such things before, of course, but this time it comes after at least four artillery shells have already been fired. The US military says it’s monitoring the situation. The deadline expires on Saturday afternoon.

Meanwhile, further west: It’s hard to keep up with who’s rebelling in Greece.

First there was Syriza, the hard-left party whose anti-austerity message resounded with straitened Greeks and brought it to power. Its leader, Prime Minister Alexis Tsipras, defied Greece’s international creditors and resisted the punishing conditions they demanded in exchange for another bailout — only to agree to a repackaged deal last week.

Amid dark mutterings about that decision from some of his former supporters, Tsipras stood down yesterday to pave the way for a new election. Now a gang of Syriza MPs, feeling themselves betrayed, have announced that they’ll form a new party of rebellion. With at least 25 lawmakers to its name, Laiki Enotita ("Popular Unity") instantly becomes the third-largest group in the Greek parliament. Will it try to wrest a mandate to govern? Or will a snap election return Tsipras to power? And either way, who will rebel next? Stay tuned.

Another refugee center in Germany went up in flames last night. Happily no one in Neustadt an der Waldnaab, in the southern state of Bavaria, was injured when someone set fire to the shelter there in the early hours of Friday morning. The same can’t be said for all of the 150 or so attacks that targeted German refugee centers in the first half of this year.

Germany is in the middle of the largest influx of refugees in its postwar history. Some 800,000 asylum-seekers and refugees are expected to arrive in the country this year — four times last year’s total. Some locals have responded with hatred. A vocal minority organizes anti-immigration marches and makes threats against foreigners. An even smaller minority actually carries them out.

Other Germans, however, are busy quietly welcoming the newcomers. Some volunteer their time to teach them the language, some donate clothes and food, some offer up a spare room — while others simply give them the benefit of the doubt. Some even remind their compatriots that they, too, were once refugees. GlobalPost traveled to small-town Bavaria, home to some of the angriest arsonists, the kindest volunteers and now, the refugees whose arrival has brought out the worst — and best — in them.

The first rule of driving in the Middle East: turn signals are purely decorative. Rule number two: a red light isn’t red until it’s really red. For the first few seconds at least, it’s just warming up. Rule number three: that red circle with the white line through it at the top of a one-way street? That’s the sign for a shortcut.

This enlightening, if terrifying, guidance comes courtesy of a hilarious video in which a worldly wise Jordanian attempts to teach a hapless American the fundamentals of driving in Amman.

It’s a comedy sketch, but one rooted in reality: Jordan had 620 reported road traffic deaths in 2010, a rate of 22.9 deaths for every 100,000 persons. While that isn’t nearly so bad as in, say, South Africa, a country with one of the highest rates of road deaths in the world, driving in Jordan is certainly a lot more chaotic than people from many other parts of the world are used to. Let’s just say you probably wouldn’t want your kids doing it, as GlobalPost Social Media Editor Sara Yasin can attest: her Palestinian-born father used to warn her categorically, “Don't ever drive in the Middle East.”

But hey, if you have to do it, do it smart. And be prepared to forget a few of the rules they taught you in driver’s ed — or rather, to learn new ones. Like rule number four: never, ever look to see what’s coming on the other side of a traffic circle. Just put your hand over your eyes, and drive.