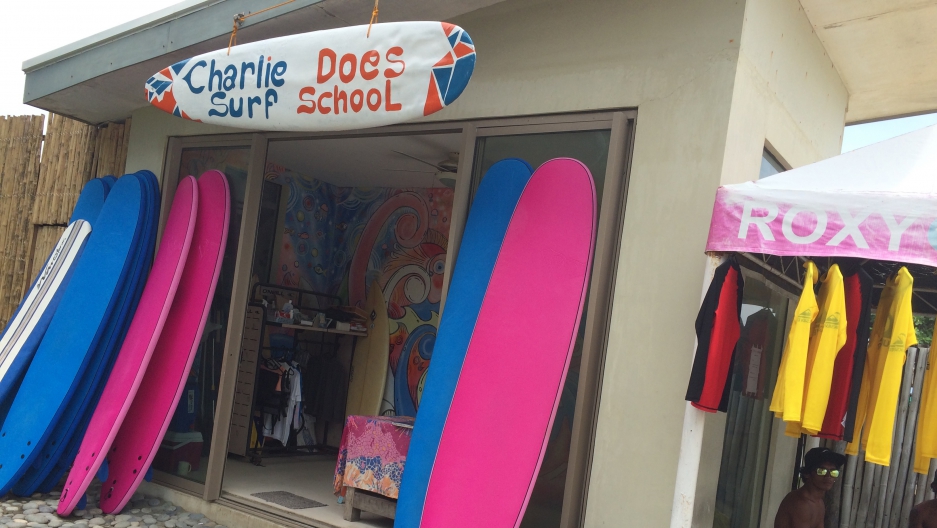 A surf shop in the Philippines town Baler, where some surfing scenes from Apocalypse Now were filmed.

Pony-tailed Raymond Hamora rubs wax onto a red, yellow and green long board. The 25-year old lifeguard grew up in the town of Baler, 140 miles northeast of Manila.

To earn a little extra money, Hamora teaches out-of-towners how to surf.

“Remember to bend your knees,” he tells a pair of first-time surfers, including me. (We're wearing tight yellow wet shirts with the word “student” printed on the back.)

Legend has it that surfing first came to North America a century ago when two Hawaiian princes showed off their wave-riding skills to onlookers in California.

The Philippines has its own surfing origin story, but it only dates back a few decades.

Baler is considered the birthplace of surfing in the Philippines, a distinction it earned in the late 70s when Francis Ford Coppola chose this once-remote fishing village as the backdrop for some scenes in his film, “Apocalypse Now.”

Robert Duvall, who played the surfing-obsessed Lt. Col. Bill Kilgore, uttered the immortal lines, “I love the smell of napalm in the morning” and “Charlie Don’t Surf” on this very beach (in the film it was referred to as Charlie’s Point).

Baler’s connection with the film has earned it legendary status in the Philippines. And the making of Apocalypse Now is legend. too.

Filmmaker Doug Claybourne, who was on Coppola’s crew in Baler, recalls sets being destroyed by a typhoon. The Philippine military would suddenly reclaim its borrowed helicopters to go fight insurgents. Even the surfing scenes didn’t go as planned.

“I can’t honestly say it was true because I didn’t check it out, but the initial two surfers who were hired to play that role, they were kept on and on and on because the movie kept dragging out. Ultimately, when it came time to do their thing, they couldn’t surf,” Claybourne says, adding he never looked into what became of Baler after the film crew left town.

Today, the northern part of the beach is known as Charlie’s Point. A few local businesses, including a surf shop, are called Charlie Does, a nod to the famous line. And an annual surf competition is held here in February.

But that’s not the end of the story of how surfing was introduced here, according to Edwin Namoro, 48, a local hotel owner.

Edwin Namoro claims he was one of the Philippines’ first surfers after an Apocalypse Now crew member left behind a board for him and his friends.

Namoro remembers as a kid watching the Apocalypse Now surfers — he says he’d never seen anything like it before. When the shooting was over, he says one of the filmmakers gave his friend a surfboard that was used on the set.

Namoro claims that gift helped him and his friends become the first Filipino surfers, and they in turn helped popularize the sport across the country.

“Like any legend, it’s about 50 percent true,” says the Manila-based filmmaker. “It’s a given fact that surfing began after that film, especially in Baler and in the wider scope in the Philippines.  That’s not to say that one caused the other, but absolutely one came after the other.”

Cornejo was recently in Baler shooting his own movie, “Apocalypse Child,” which plays on the local legend.

In addition to that left-behind surfboard, it imagines that one of the American crewmembers from the 70s left behind a love child.